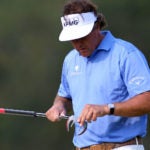 Mickelson's putter even had the same grip that Keegan Bradley used on his belly putter.

Phil Mickelson has tried some outlandish club setups throughout the years in hopes of shooting lower scores. He’s experimented with using two drivers in the same round, no driver at all, two lob wedges, clubs that are plastered in lead tape and, of course, the legendary Phrankenwood.

Here is another story to add to the ever-growing list of Mickelson’s wild equipment tales.

The year was 2011, and Keegan Bradley was taking the PGA Tour by storm using a (right-handed) Sabertooth belly putter. Bradley won the 2011 PGA Championship, seemingly out of nowhere, with a putting stroke that anchored the belly putter to his stomach.

Apparently, Bradley’s special putter caught the eye of Mickelson, and he wanted to give it a try. As Thompson tells it, Odyssey didn’t have a left-handed version of the putter available at the time. So Odyssey lead designer Austie Rollinson had to improvise.

“[Rollinson] had to take a right-handed head, slice the hosel off, and re-weld it on the left-handed side of the golf club,” Thompson told Fully Equipped. “We were lucky because that head was symmetrical, for the most part, so he could do it.”

With the hosel on the correct side of the head for a left-hander, however, there was still an issue. The Odyssey logo on the face insert was on the wrong side.

“Then, the hardest part was getting the Odyssey logo on the heel so it wasn’t sitting out on the toe,” Thompson said. “[Rollinson] jumped through a lot of hoops to get this putter made.”

The putter was ready to go in the bag ahead of the 2011 Deutsche Bank Championship at TPC Boston. Then came the final challenge — Mickelson had to learn how to use the putter.

Thompson said he hadn’t worked with Mickelson much prior, but Mickelson enlisted Thompson’s services to help figure out his newest club.

“I was like, ‘Holy cow, he’s asking me about ball position, and where his eyes are, and what he should be feeling.’” Thompson recalls thinking. “And I’m like, ‘Dude, you’re Phil Mickelson, I don’t want to tell you what you should be feeling. But I’ll give it my best.’”

The experiment was short-lived, though, as Mickelson only used the Sabertooth belly putter for the first couple of rounds of the event. The story, however, just adds to the legend of Phil Mickelson, and shows his willingness to try anything to improve.

To listen to our entire interview with Johnny Thompson, check out the SoundCloud link below. You don’t want to miss all the great equipment information about Mickelson, and more of Thompson’s stories from the PGA Tour.