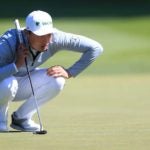 Haotong Li stares down a putt during the 2020 PGA Championship.

Through two rounds of the 2020 PGA Championship, Haotong Li – currently ranked 114th in the Official World Golf Ranking – holds a two-stroke lead over a group of household names tied for second. He’s found himself in the lead thanks to steady iron play (ranked 1st in Greens in Regulation through two rounds) and his performance on the greens (ranked 3rd in Strokes Gained: Putting).

You may not know much about Li just yet, or his equipment, but he made a notable putter change last week at the 2020 WGC-FedEx St. Jude Invitational.

While Li is no stranger to changing putters in general, he has typically opted for an Anser-style blade putter. At the WGC last week, however, Li changed into a custom Odyssey Stroke Lab Black Seven head.

Although it’s a mallet-style head, it has a custom flow neck that’s designed to have more toe hang.

A mallet with toe hang, though, pleases golfers who want to release the putter with an arcing stroke, but who also want the added stability of a mallet head. With a flow neck hosel and a mallet head, Li’s new custom putter fits his stroke needs and preferences.

Ahead of the WGC event last week, the specs for Li’s putter were 34.5 inches, 2.5 degrees of loft and 71 degrees of lie angle, and it’s equipped with a SuperStroke Traxion putter grip.

There’s no bigger test for a new putter than having the lead going into the weekend at a major. Let’s see how Li and his new putter hold up to the pressure.

For more on the latest equipment news, tune into our recent Fully Equipped podcast below!

Bryson DeChambeau is the only pro with this 'unusual' equipment quirk