‘Tiger Slam’ clubs sell for an astronomical number at auction 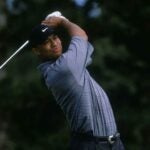 As Scottie Scheffler slept on a 54-hole lead at the Masters, a set of Titleist 681 T Forged irons and Vokey wedges that once belonged to Tiger Woods — if you believe Golden Age Auctions and not Woods’ camp — fetched nearly double what Scheffler made on Sunday afternoon at Augusta National.

Go ahead and read that last line again.

The number, as I’m sure you’re wondering, is $5.156 million, an industry record for a set of irons and wedges that were photo-matched to the “Tiger Slam” — quite possibly the most dominant stretch of golf in the history of the sport. Even with the rock-solid provenance from Golden Age Auctions, it’s a preposterous figure that becomes even more preposterous when you realize the same set of clubs once sold for $57,242 in 2010 to Houston businessman Todd Brock. (Talk about making a tidy profit on your initial investment.)

Before the clubs hung on a wall in Brock’s office, they belonged to Steve Mata, who acquired them when he was Titleist’s vice president of player promotions. As the story goes, Woods needed fresh irons and wedges, and the 2001 Buick Open turned out to be the ideal spot to break them during the Wednesday Pro-Am. Once the clubs were cleared by Woods, he gifted his old gamers to Mata.

Mata wound up keeping the clubs in his possession until 2010 when they were put up for auction. Shortly after the lot went live, Woods came out and denied the clubs were legitimate. According to a Golfweek story from 2010, Woods revealed he used two sets during the Tiger Slam — and both were still at his home.

To confirm the provenance of the irons, Mata signed a sworn affidavit and underwent a polygraph test that he eventually passed. Nelson also signed a declaration in 2020 verifying the clubs and corroborating the iron and wedge exchange. But even that wasn’t enough to keep the doubters away.

Woods’ agent, Mark Steinberg, once again denied the clubs were legitimate during the second go-around, but the statement did little to deter bidders from sending the price through the roof.

In the end, the clubs smashed the previous record price for a piece of golf memorabilia — $682,000 for Horton Smith’s green jacket from the inaugural Masters — that was set in 2013. It’s another reminder that Tiger remains the unquestioned G.O.A.T. — both on and off the course.