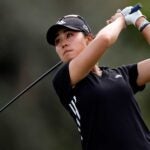 Danielle Kang hits her tee shot on Saturday on the 3rd hole at Tiburon Golf Club.

Danielle Kang, during Friday’s second round of the CME Group Tour Championship, birdied both the 17th and 18th holes, and while the four-three finish was noteworthy, it was the second stroke on that run that she wanted to talk about first.

All it took was a call. She picked up distance by picking up the phone.

While Kang isn’t the longest player on the LPGA Tour, she also isn’t the shortest — an average of 252 yards per drive will have you putting for at least a few eagles. Only, she said ahead of the event, she was driving it, at best, 230 for the past couple of months and was resigned to being “pretty far back now.”

“I’ve lost weight, muscle weight,” she said Wednesday. “I’ve been trying to put on muscle mass, but I haven’t been able to. I’ve been on the road for nine weeks, and in between, gone to my best friend’s wedding. Hasn’t been bad, just haven’t had time, yet do have time, and yet it’s just not doing it.

“But my 3-wood is only going five yards farther than my driver, so we even thought of, let’s just hit a 3-wood off the tee just to make myself feel better. But just has to figure out spin rate and the way I’m contacting, even if it’s — whether it’s the equipment — Titleist has been so helpful in trying to figure out why I’m hitting it the way I do.

“I don’t really think it’s the equipment. It’s me mostly for me, so I think that’s going to take time to pan out and why.”

It took two days. While it may not have been the gear, an equipment change was also the answer.

After Friday’s second round, Kang said she had been on the phone with Titleist tour rep JJ Van Wezenbeeck, he sent over a lower-lofted driver head, and she put it in play.

“He just sent me a driver head that is a loft lower that we think would help it run,” she said. “So today I hit it probably 20, 30 yards further than I have been for the last two months, so I — it was easier. I wasn’t hitting hybrids into greens.”

A reporter then asked: “How much more comfortable did you feel, like, Oh, hey, I’ve got some yardage back and I actually can hit the ball pretty far again?”

“We all thought it couldn’t have me, but the technology is so good nowadays, right?” Kang said. “We thought we would try different settings. As long as I’m hitting my irons the distance that it’s going, it couldn’t have been me, so JJ thought about it and so he sent me a lower loft driver, eight degree instead of a nine or 10 degree.

“He sent it to Ritz Carlton. I put it on this morning and I was trying to see if I hit it left or right and put it in play, and it was going further, which made golf a little better.