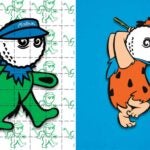 Malbon's Buckets Club NFTs live at the intersection of golf and culture, with nods to the Grateful Dead and "The Flintstones."

This story was produced as part of a paid partnership with Malbon.

Golf, like the rest of the world, is headed to the metaverse.

Malbon is to golf apparel what cryptocurrency is to traditional investing: forward-thinking and appealing to younger audiences. Founded by Stephen and Erica Malbon in 2017, the company bills itself as a “lifestyle brand,” living at the intersection of culture and golf apparel. That means Malbon’s gear (like, say, its Budweiser Convertible Tour Jacket, below) looks more like what you’d see in the streets of Soho than on the fairways of Augusta National. It’s inspired by modern streetwear trends, and unlike most styles in the golf apparel space.

But gear is only the outermost layer of the Malbon onion. The company also tries to sell itself as a community to consumers — a place where likeminded individuals can not only buy apparel but also connect with one another. The aim, ultimately, is to create a small but deeply loyal group of followers who view Malbon as an extension of their personality, engaging with content, buying limited-edition “drops” and attracting new consumers with similar interests.

Enter the metaverse, which is essentially a virtual universe built for social connection. If the current Internet is a place where individuals can meet and converse, the metaverse is a place where they can share in moments and experiences. The locations are virtual, but the money being invested and earned there is very real.

While still in its infancy, the metaverse is morphing into a thriving subculture for artists and creators, and a place where creative types can release virtual editions of their products, called non-fungible tokens (or NFTs), which other members of the community can bid on and buy. As a pot-sweetener, many creators are offering real-life perks to those who purchase their NFTs, like exclusive access to events and discounts on products. While it might sound hokey, for creators with highly engaged followings, the growth of NFTs has provided not only an additional revenue source but also an avenue for the virtual expansion of their physical communities.

For Stephen and Erica Malbon, the metaverse represented something of a slam dunk. They’d done the difficult work — building out a loyal customer base and cultivating an authentic community around their brand. Now came something a bit easier: bringing that community into the metaverse through an exclusive collection of NFTs called The Buckets Club.

True to form, Malbon insisted upon an individually curated approach to each of its 1,000 NFTs. Rather than offer replicas of the same NFT image, artists were commissioned to create 1,000 unique offerings utilizing the company’s Buckets logo, including design inspiration from the Grateful Dead and “The Flintstones.” Those who purchased one of Malbon’s NFTs would become Buckets Club “members,” earning exclusive access to Malbon events, discounts and early access to gear, and pre-sales of future Malbon NFTs. Each Buckets Club NFT would sell for .3 ether (a cryptocurrency used for NFTs), or roughly $1,100.

The first release of the Buckets Club collection sold out almost immediately. In the days since, Buckets Club NFTs have appeared on resale markets for prices beginning at 1 ether (around $3,500) — more than three times their original asking price — and going as high as 731 ether (or $2.7 million).

If the explosion of interest surprised those at Malbon, they hardly showed it. In fact, the company seems convinced the early returns are only the beginning. In the community’s Discord chatroom, a near-constant stream of messages flow from every corner of the world, and Stephen Malbon frequently interacts with fellow users, many of whom are first-time NFT owners. In the coming months, Malbon says, it hopes to cultivate a “constantly evolving ecosystem” to continue adding value to its NFTs.

It’s all a bit of a gamble — anything in this new world is. But Malbon’s chips are on the virtual table.