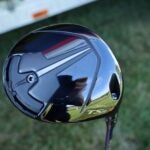 Titleist's TSR3 driver — along with TSR2 and TSR4 — makes its Tour debut this week.

Titleist’s TSR drivers and fairways woods were spotted this morning on the USGA conforming club list and will make their official Tour debut at the Travelers Championship. This is part of what Titleist calls its tour seeding process where new products first appear in the public eye beyond the closed doors of Titleist R&D and into the bags of the best players in the world.

As expected the new metal woods continue with the TS naming structure which stands for Titleist Speed, and like previous releases, we currently have 3 drivers and 2 fairway wood options to help players get dialed in.

What we know: Titleist TSR drivers

Beyond what we can conclude from images and markings on the heads, Titleist has no official comment on what’s under the hood of these new metal woods when it comes to technology. Even without official insight, we can make some pretty confident assumptions based on the visual cues exhibited on the heads, their names, and the history of the Titleist metals.

We’re also not sure what the “R” in the name alludes to, but I’m willing to guess it has something to do with refined speed in the same way Titleist have gravitated towards using “S” for speed when naming the T100S irons. If Acura can bring back the Integra Type R for racing, no reason Titleist can’t build in the same association.

From the first images available, Titleist looks to be sticking with the four driver lineup TSR2, 3 and 4, with the TSR1 likely coming at a later date. Considering the success of the TSi1, it would be hard to imagine a scenario where they eliminate this from the fitting options for players on the lower end of the speed spectrum.

Titleist TSR2: LIike the TSi2 before it, the TSR2 should be the most versatile head that combines mid to low spin with forgiveness.

Titleist TSR3: The new TSR3 carries forward the rear adjustable SureFit CG weight track but in a slightly more compact-looking design with more of the weight exposed beyond the outside of the housing. With engineers pushing the limits to get every ounce of performance out of new designs – the extra weight outside the track is likely there to help improve MOI.

With the weight track and adjustable hosel, this driver will offer the most adjustability of any of the new models.

There are two tell-tale signs that the team at Titleist has looked to unlock more speed through aerodynamics based on the obvious visual changes to the geometry of the heads.

The first is the extremely streamlined graphics on the sole which have been reduced to the bare minimum compared to previous designs including a refinement to the SureFit adjustable hosel port on the sole.

The second clue is spotted at the rear of the heads where the crown meets the sole – known as the skirt. Around the weights on the TSR4 and TSR2 there are small ridges that protrude which act like mini diffusers on a Formula1 car to speed up airflow and reintroduce it to the air around the head – in simple terms it helps the head move faster, and a fast club head results in more distance.

Like the previous TSi series, the new TSR fairway woods will come in two options that correspond with the drivers; the TSR3 and the TSR2 — but with one very interesting extra in the TSR2+.

The biggest change that instantly jumps out across the line is the removal of the Active Recoil Channel (ARC) on the sole. This feature allowed for more flexibility and helped maintain ball speed on shots hit lower on face, but I suspect that Titleist has reengineered the face and sole internally so there is a greater performance from the heads.

Beyond the changes, Titleist will be sticking with the same SureFit hosel design.

Titleist TSR3: The TSR3 continues with the Surefit weight track on the sole to help players with adjusting the center of gravity, weight, and feel of the fairway woods. The improvement here is the widening of the track, and an increase in the number of positions to further increase the custom fitting options. On a very nerdy and technical note, you might even see some players use two weights positioned on the far heel and toe, thereby increasing forgiveness/MOI.

Titleist TSR2: The new TRS2 fairway woods look to continue being the more forgiving option that will offer simplified adjustability with one weight port on the sole for swing weight, and feel fine-tuning. The update is the position of this weight from the rear of the head to a position much closer to the face.

This more forward position is likely to help with reducing spin to narrow flight windows and improve trajectory control.

Titleist TRS2+: This is a new stand-alone head that is slightly larger than the TSR2 and will only be available in a strong 3-wood configuration. The USGA conforming list shows 13- and 14.5-degree lofts as options (14.5-degree RH only), but we can’t confirm whether both lofts will end up at retail.

What makes this an interesting product release? It’s the first time since the 915 Series that Titleist has offered a specific strong 3-wood option in a larger head, with the last being the 915FD.

We don’t have any official word yet from Titleist on the retail release of the new line, but if they are sticking to their traditional release cycle we should see the new TSR line this fall for fitting accounts, and full retail release soon after.

Check back later this morning for in-hand photos of every club.