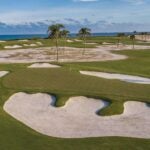 Since our last World ranking was published, golf fans have twice been treated to views of Seminole on television, first by an event to raise money to fight Covid in May 2020 followed by the Walker Cup in 2021. Arguably the finest site on which Donald Ross ever worked, the course plays along and between two main dune lines, and Ross made the most of the opportunity with holes continually tacking in different directions. The club prides itself on its firm playing surfaces, which were on full display during the Walker Cup. Some grouse that the course’s reputation is built on the club’s exclusivity, which is unwarranted given that standout holes abound, including the 4th, 6th, 13th and one of the game’s finest finishing three hole stretches. (Photo: Patrick Koenig)