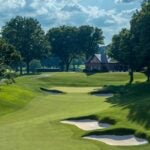 Championship golf is a double-edged sword. Hosting major events on a regular basis confers prestige and pride to any membership. Conversely, many sites deemed worthy were built approximately a century ago when hickory-shafted clubs were the norm. Immense pressure is placed on clubs to have their course evolve to handle equipment advancements. One banal way? Increase the use of penal water hazards. Such happened at Oak Hill in the late 1970s. Much to its credit, the club recently reversed course, recognizing that Donald Ross’s work should be brought back to the greatest extent possible. Among other things, Andrew Green saw to it that the incongruent water features were removed and made sure that the mighty East Course was once again a cohesive Golden Age masterpiece without blemishes. (Photo: Evan Schiller)