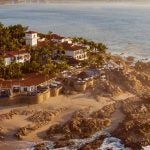 Stratospheric views of the Sea of Cortes are a big selling point at the One&Only Palmilla. But they are also a reminder that the One&Only is just the latest “empire” to inhabit this spectacular piece of the Baja California peninsula. This is prime real estate, and prime real estate has to be conquered — just as Hernan Cortes helped bring down the Aztecs. The resort's decadent history began in the mid 1950s, when it originated as a plush 15-room hideaway for Don Abelardo Rodriguez, the son of the president of Mexico. The palace hosted various notables, including John Wayne, Lucille Ball and President Eisenhower, who rolled in on yachts or private planes. Maybe they enjoyed the privacy, or maybe it was the migrating humpback whales breaching the surface of the sea that kept them coming back. Jack Nicklaus, a conqueror in his own right, designed the course at Palmilla Golf Club in 1992. First came the Mountain and Arroyo nines, then the Ocean loop in 1999. The three nines are carved out of an oceanside canyon that is framed by the stony peaks of San Jose del Cabo, with holes traversing gorges and hills littered with cacti. Nicklaus Companies and GOLF.com are affiliates of 8AM Golf.