Xander Schauffele on first trip to Augusta: ‘I was honestly a little weirded out’

Entering 2018, Xander Schauffele had set expectations sky-high. The 25-year-old’s 2017 had included Rookie of the Year honors and a win at the Tour Championship — how could he measure up? But Schauffele threw down in a big way, contending in two majors, posting eight top 10s and ascending to No. 11 in the world. Not bad!

Schauffele joined the Drop Zone to break down his year, from Augusta’s unique, eerie vibes to dealing with unpredictable crowd behavior at the British Open to sneaking off from the Adidas photoshoot with some new gear. Here are some highlights from the sit-down:

“It’s like a museum in there,” Schauffele said. “I didn’t see any birds, any squirrels, any ants…you hear them. And you hear a random waterfall in certain parts of the course — I was looking for speakers.

“I don’t know what it is, but there is an eerie sort of vibe to the place,” he continued. “I was honestly a little weirded out at first. And I felt like I was walking on eggshells all week. I think it was a first-time thing.”

“I need to hit the gym for like, three years straight to become his little brother.”

“I enjoy tough golf, I guess. There’s something fun about it that other people may not think is fun.”

On a shrieking child interrupting a tense moment at the British Open:

“It wasn’t a baby. She was like, four-ish. Definitely looked like she could walk. She was loud…” Schauffele said, laughing. Then, as he addressed the ball, the baby cried out. “That’s why I started laughing, I wasn’t mad at all because I was preparing myself this whole time for the baby to start talking, and then it does…I can’t get mad at the kid.”

On sneaking off from the shoot with some fresh Adidas apparel:

“I’ll probably slip a couple hangers in the car and steal some gear,” he said.

You can see the complete interview below:

After the interview, Schauffele also walked GOLF through a series of steps to improve consistency. Given the relentlessness of the California native, that’s worth checking out, too: 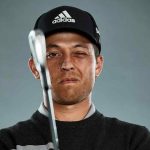 You may also like Xander Schauffele’s X-Factors: The one thing that will improve every part of your game