It’s Women’s Golf Day! Here are 3 ways you can participate 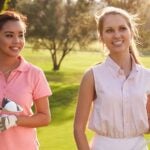 Women’s Golf Day — a global movement with a mission of engaging, empowering and supporting women and girls through the game of golf — is celebrating its fifth anniversary this year. Its simple concept as a one-day, four-hour event designed to both provide a welcoming environment to introduce women to the game and foster relationships and networking between existing female players has made it the fastest-growing female golf-development initiative, with events staged in more than 900 locations in nearly 60 countries since 2016.

So how can you participate and support the movement’s mission? Here are three ideas:

If you’re able to play golf on Tuesday, don’t hesitate to tee it up! You can find a participating location here. It’s the perfect opportunity to invite a friend, or go alone and make some new ones.

There are more than 50 inspiring videos for new and existing golfers in the Women’s Golf Day video library from some of the game’s most notable personalities, like Jack and Barbara Nicklaus, Michelle Wie, Amanda Balionis, Renee Powell and more. You can check them out here.

Follow along with the day’s activities around the world by joining the movement on social media. Check out @womensgolfday on Twitter, or use #womensgolfday.