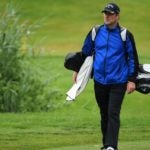 Even with most eyes on Muirfield Village last week for the beginning of the PGA Tour’s two-week stay at Jack’s place, there were still storylines playing out under the surface of pro golf. Here are four stories you might’ve missed.

It was a big week for La Cañada High School alums in professional golf.

The suburban Los Angeles school is the alma mater of Collin Morikawa, who took home his second Tour title at the Workday Charity Open, but Morikawa isn’t the only accomplished golfer to come out of La Cañada. David Lipsky, winner of last week’s TPC San Antonio Challenge at the Canyons on the Korn Ferry Tour, also graduated from La Cañada.

Although they never overlapped while in school (Lipsky is eight years Morikawa’s senior), the two still keep in touch and were exchanging encouragements over the weekend as they chased their respective titles.

“We were both like, ‘Let’s take care of business today,’” Lipsky said. “So that’s pretty amazing.”

It’s a good week to be a Spartan.

Playing opportunities have been slashed as a result of the coronavirus pandemic, and it has been particularly taxing on development tours. To combat this problem, the PGA Tour announced a fall series for players from their development tours to compete. This week, they took it a step further.

The Mackenzie Tour announced their own four-event fall series to help recuperate some playing opportunities that have been lost this year. The events will be targeted toward Canadian professionals and elite amateurs who are impacted by the border closure between the U.S and Canada.

“This series was something we were contemplating before we canceled the season,” said Mackenzie Tour Executive Director Scott Pritchard. “We knew the demand from players would be there, and knowing that, we went to work to provide them with these playing opportunities.”

The series is being sponsored by Canada Life and will be played at two resorts — Bear Mountain Golf & Tennis Resort Community and TPC Toronto Osprey Valley — on opposing ends of Canada. The series is scheduled to run from mid-August to mid-September.

No caddie, no problem

Marc Warren won the Austrian Open last week, breaking a six-year title drought for the 39-year-old. But there’s a catch — he did it without the benefit of a caddie for the week, instead schlepping his own clubs around Diamond Country Club for the week.

Warren’s caddie failed to pass a coronavirus test when arriving on site for the week, so he wasn’t allowed on property. With no back-up options available, Warren decided to hoof it himself.

“Carrying my bag this week probably helped tone it down a little, just going out and playing and seeing what happens. The result couldn’t have been any better,” he said.

Despite the result, Warren isn’t ready to ditch a looper for good.

“Hopefully this is the one and only time,” Warren said. “No matter what I say, I do enjoy the caddie’s company.”

Monday qualifier has a big week

Standing in the fairway on his final hole in Round 2 of the Workday Charity Open, MJ Daffue was one shot outside the cut line. He stuffed it to two feet, swept it in for birdie and lived to see the weekend.

Making the cut might not normally be something to be celebrated, but as a PGA Tour nonmember, Daffue (pronounced “Duffy”) has to capitalize on every opportunity he gets. The South African only got into the field after a 63 in the Monday qualifier, so making the cut already defied the odds. Once he secured his weekend tee time, he took advantage.

Thanks to a bogey-free Saturday 65, Daffue vaulted up the leaderboard and into the top 10 heading into the final round. He lost a bit of steam on Sunday, firing 73 to settle for T22, but for a man with no status, the paycheck will go a long way.