Why one beginner got the opposite advice he expected: ‘Swing harder!’

Last month, I learned how lacking I was in the muscle groups necessary to be a great golfer. This month, the news gets worse: The new game is all about power.

If there is one dominant story in sports over the last decade, it has been the generational shift from old-school, anecdotally driven and traditional practices to a more analytical, data-driven approach. If you can’t document it, it might as well be apocryphal…to use an outdated phrase. Data has taught us that almost all we thought about sports was wrong. In football, it’s better and more efficient to pass than to run. In baseball, a walk is as good as a hit, and RBIs are dumb. In basketball, three-point attempts are the smarter play than mid-range jumpers. Vince Lombardi, Connie Mack and Norman Dale turned out to be wrong about a ton.

As a golf newbie, I was unaware that this revolution had made its way into the gentleman’s game until my instruction guru Jon Tattersall asked me why, during a drill involving my driver, I was swinging so softly.

“You are stronger than that,” he said, flattering me. “You can hit it harder.”

“But I thought you weren’t supposed to swing so hard,” I said. “Easy swing, right?”

Tattersall frowned. Not this again.

I have learned frighteningly little about golf during my time on this earth, but one thing I thought I understood was the virtue of a careful, controlled swing. This isn’t just a golf thing; years of Little League taught me that swinging too hard was a terrific way to strike out. But it’s a particularly prevalent mindset in golf, and for good reason: No less an authority than Jack Nicklaus has spent years imploring people to stop swinging so danged hard. In his book, My Golden Lessons, Nicklaus says the key mistake amateur golfers make is trying to swing too hard and too quickly. Even Butch Harmon has written that golfers should “make a conscious effort to swing at 75 percent of your maximum speed.”

When you’re a newbie like me, the last thing you want to do is take a whopping cut and whiff. But Tattersall, in his Fusion ATL studio wired floor-to-ceiling in censors and cameras, calls this thinking archaic.

“What you’re trying to generate is power,” he says. “Obviously, you want to have a controlled swing, but control and power are not mutually exclusive. I mean, you’re driving the ball. You want to drive it. And that requires physical power.”

The idea that golf is a game of power rather than guile is not a popular one. It’s a sport, after all, that we can all go out and play, that we can conquer through practice, persistence, mental fortitude and beer. One reason people love the game is because those who play it at the highest level haven’t, traditionally, looked all that different than the rest of us. Maybe they rock a golf shirt a little better than we do, but they’re not supposed to be of an alternate species. 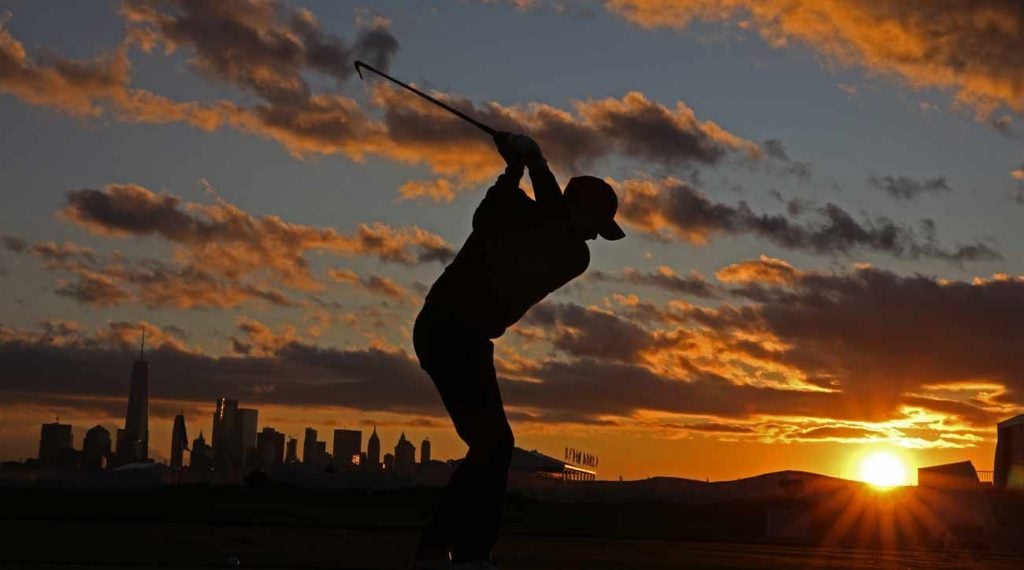 But the revolution in golf over the last decade, started in part by Tiger Woods and carried on by today’s Tour stars, now dictates that the sport we play is not the sport they play. They’ve gotten there through power, and gained that power not with tired axioms but through advanced training regimens, with a focus on biomechanics and data and sophisticated analytical techniques. The pros are getting bigger and stronger and more efficient—which means they are getting a lot less like you and me.

It’s understandable, then, that among fans there has been a resistance to this influx of power. I hear it all the time: I love watching golf, but now it’s all about just how hard you can hit it. Weekend jocks can relate to precision and control; we can’t relate to robotic physiology and relentless strength training. So in many ways, we tell ourselves that it’s not about power, it’s about accuracy and the ability to stay in the moment as a player. Of course, it’s partly about that, too, Tattersall says. But to reject scientific advances in golf is to willfully leave yourself behind the times. The game has changed. It’s our job to change along with it.

In other words: Like it or not, to be the best golfer you can be, you gotta hit the s–t out of the ball. “So swing with all the power you’ve got,” Tattersall tells me.

This sort of primal kinetics I can get behind. So I rear back and I let it fly with all I can muster. Eat my data, old timers!

I miss the ball entirely. Obviously.