Rory McIlroy won the Jack Nicklaus Award for the PGA Tour’s Player of the Year on Wednesday, but it didn’t come without a heated debate over who was most deserving of the honor.

McIlroy beat out fellow nominees Brooks Koepka, Matt Kuchar and Xander Schauffele, but it was essentially a two-horse race between McIlroy and Koepka, both of whom won three times on Tour last season. McIlroy himself said he was “somewhat surprised” when Nicklaus broke the news to him that he’d won.

The heightened interest around this year’s results raised at least a couple of questions about the Player of the Year balloting, namely how many players participated in the voting and what information was dispensed on the ballot.

In a phone interview with GOLF.com, Laura Neal, the Tour’s senior vice president of communications, did not say how many players voted in 2019 but she did say that in any given year 45 to 60 percent of players participate. The Tour also provided GOLF.com with a copy of the ballot, which you can read here: 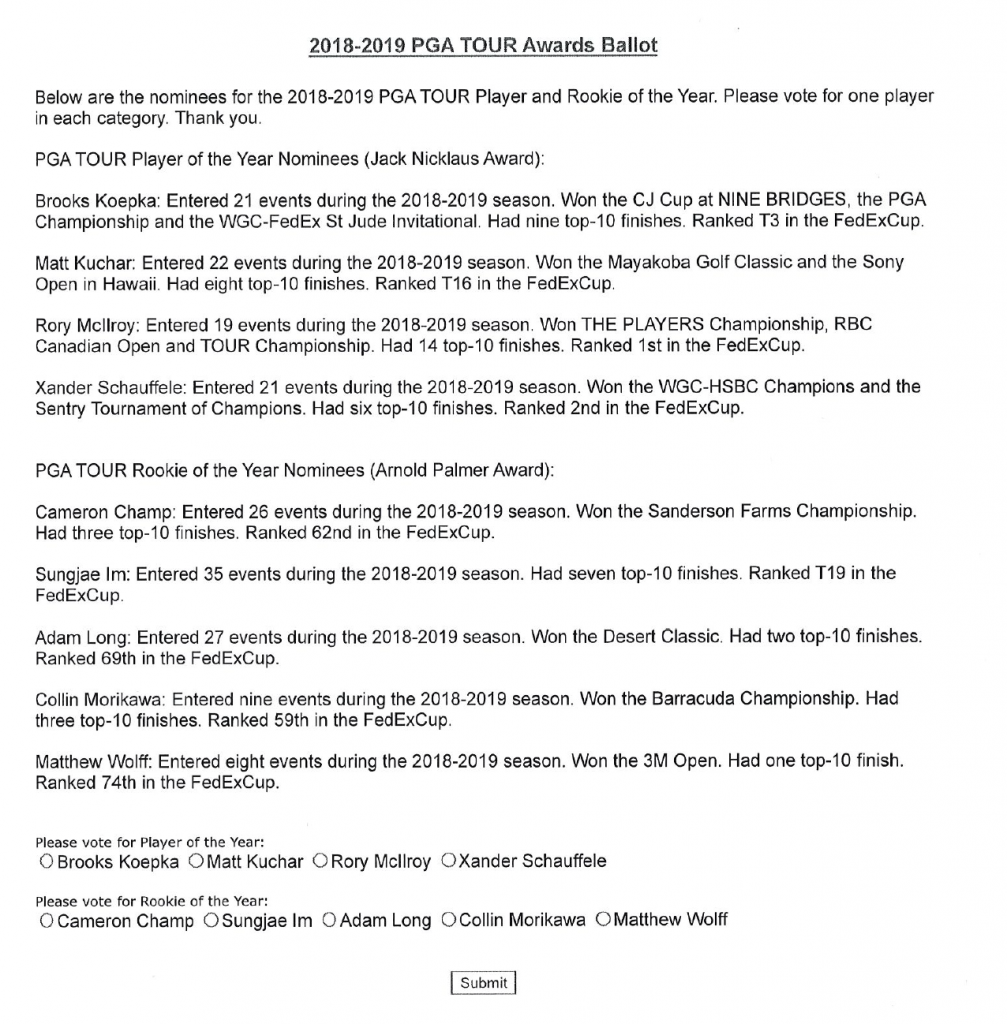 The 2019 PGA Tour Player of the Year ballot.
PGA Tour

The ballot summarizes each candidate’s season with four boilerplate statistics: number of tournaments entered, wins, top-10 finishes and FedEx Cup rank. Notably absent are the players’ results in the majors, including any mention of Koepka’s historic 2019 run (he finished in the top-4 in all four majors, a feat that has been matched only by Jack Nicklaus, Tiger Woods and Jordan Spieth). Neal explained that the Tour intentionally omits any records or historic achievements from the summaries so as to avoid any appearance of “editorializing or influencing the process.” (For this same reason the ballot did not call out, for example, that McIlroy became the first player in history to win the Players Championship and FedEx Cup.) This means it’s beholden upon the voters to be informed as to what the POY candidates achieved over the past season beyond the four basic statistics that are provided.

Neal said the ballot is delivered electronically to eligible voters — players who have played in at least 15 events. The completed ballots go directly to the Tour’s accounting firm, Grant Thornton. Employees there tabulate the votes without Tour supervision and send the results to the Tour. The process is broadly similar to how Academy Award votes are tabulated.

“Feel free to debate whether the PGA Tour membership should have voted Rory or Brooks as Player of the Year,” Neal wrote in an email Friday. “What’s not up for debate is the Tour’s integrity — in this process or otherwise.”

It’s the third time McIlroy has won the Tour’s Player of the Year award, and the first since 2014, when he won three times and took home two major titles. He was asked on Wednesday if he would rather have a season like he did last year or one like he did in 2014.

“Look, every year’s different,” he said. “I’ve already had a year like 2014. I might have a year like that again. You know, I’m happier with my game, put it that way. I’m happier with where my game is now. I feel like I’m a better player now than I was in 2014, and that gives me a lot going forward.”

McIlroy’s Tour Championship victory last month bolstered his Player of the Year resume, but he admitted on Wednesday he was well aware he was going up against Koepka’s major title.

“I thought maybe Brooks winning the PGA Championship this year was going to be the difference-maker,” he said. “But you know, the other players thought differently, and I’m very honored that they thought enough of my season to give me this award.”