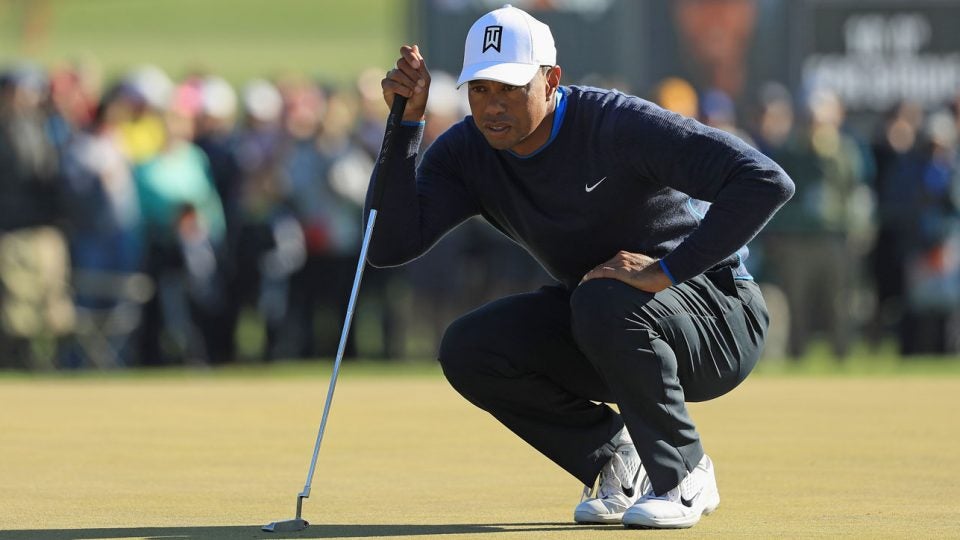 Tiger Woods lines up a putt on the 14th green during the first round at the Arnold Palmer Invitational.

So far, so good for Tiger Woods at the Arnold Palmer Invitational. Woods finished his first nine holes at three-under-par 33. That was good enough to temporarily move him into a tie for the lead with Billy Hurley III in the early goings at Bay Hill.

Woods began his round on the back nine and got off to a hot start. After two pars on 10 and 11, he recovered from a poor tee shot to set up a 10-foot putt for birdie at the par-5 12th, which he sank to move to one under.

First birdie of the day for @TigerWoods. #QuickHits pic.twitter.com/SiG3WapGsX

Next up was the par-4 13th, where Tiger’s approach hung up on the fringe of the green and nearly rolled back into the pond that protects the front side of the putting surface. He then dropped the 20-footer from the fringe to move into a tie for the (very) early lead at two under.

Tiger is tied for the lead early @APInv. #QuickHits pic.twitter.com/LsRYxIg4wS

But he wasn’t done yet. Woods followed a near-birdie at 14 with a routine par at 15. Then, at the par-5 16th, Woods knocked his second shot to 42 feet. His eagle putt came up just short, but he tapped in for his third birdie of the day to move to three under. He finished out with pars at 17 and 18 to go bogey-free through nine.

He’s walking them in.

Tiger is tied for the lead and -3 thru 7. pic.twitter.com/rgejomFh4p

You can follow every shot from his second nine holes here.