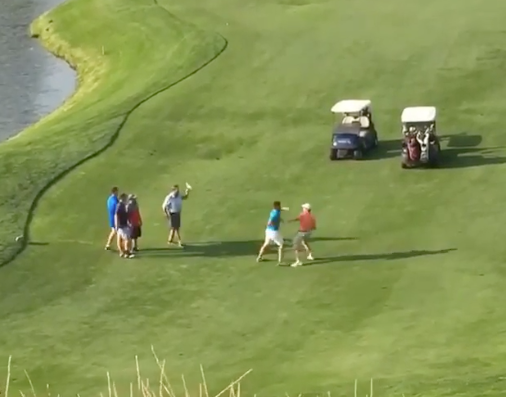 Reminder: This is what happens when you hit into the group ahead of you!
Instagram

When a golfer commits the cardinal sin of hitting into the group ahead of them, bad things can happen. As captured by Justin Abrams, even awkward fist fights between men wearing tucked-in polos and khaki shorts.

At Fossil Trace Golf Club outside of Denver, a player hit his approach while the group ahead was still on the green. Things proceeded to get wild. Player A in the orange shirt and white hat comes storming up from a greenside bunker and immediately gives Player B in the blue shirt a vicious shove. They begin to shadow box around each other, throwing punches in the general direction of each other.

One person attempts to break up the fight at the very beginning, but he gets blocked out by Player B’s playing partner. Towards the end, another player tries to put a stop to the fight but is pulled away once again by the same guy. That man is probably going to double-bogey the 18th hole for a smooth 105, and he just needs to see a proper fight just to get his spirits back up after a tough round.

The only punch that seems to land is Player B’s shot to the head that knocks Player A’s hat off. Otherwise, it’s a bunch of whiffs. The first question – among many – is: Why would anyone immediately go to boxing in this situation? The proper play is clearly for Player A to go for the takedown right off the bat. He has the momentum, as he is charging toward a stationary Player B, and who is really expecting to be speared in the middle of the fairway?

Since golf is a gentlemen’s game, they both shook hands immediately afterwards. Watch the video below. NSFW language included.

Went out to my favorite course with Kevin on my last day in CO and witnessed some absolutely ridiculous #fightclub on the 18th hole after someone hit right into the group on the green. Who says white ppl don’t brawl? #golffight #denver #neverlayup #whitemalematurity #fossiltracegolfclub