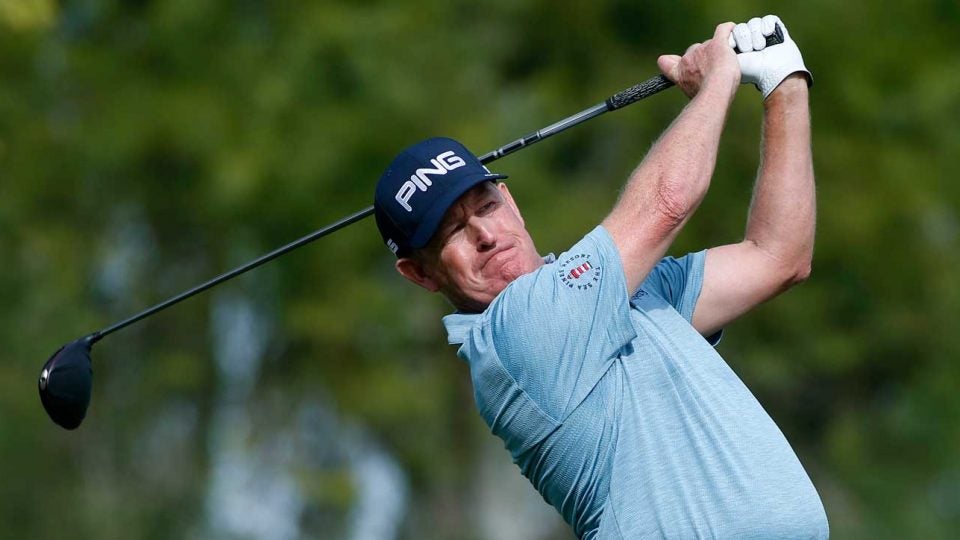 Maggert's victory at the Charles Schwab Championship is the sixth of his PGA Tour Champions career.
Getty Images

Goosen fired his lowest round of the week on Sunday, a seven-under-par 64, to join Maggert, who shot a final round of five-under-par 66, in the sudden-death playoff, which commenced on Phoenix Country Club’s 527-yard par-5 18th hole, which Maggert and Goosen birdied in regulation. Both players parred the 18th twice in the playoff before moving to the club’s 17th hole, a 411-yard par 4, for the third extra hole.

Goosen hit his drive in the bunker while Maggert had a 123-yard approach from the fairway. After Goosen hit his shot to birdie range, Maggert answered by one-hopping his shot directly into the hole, to the delight of not only the spectators — but also Scott McCarron, who retained the top spot in the Charles Schwab Cup standings, despite finishing T27 out of 34 players this week. After a stellar season that included three wins and 14 top-10 finishes, failing to control his own destiny in the end stung a bit for McCarron.

From the middle of the fairway! 🙌

“It’s a lot, it’s the pressure,” McCarron said after his round. “I’ve been in the lead here for 20-something weeks. I think everyone’s gunning for me, everybody’s telling me you can do it, you can do it. I think it gets to you a little bit. This is my first time in this position. I talked to Tom Lehman and Bernhard Langer, how difficult this really is when you want something this bad. I think maybe just wanted it a little bit too much and didn’t play that well this week.”

The win marked Maggert’s sixth PGA Tour Champions victory, and first since 2015, and launched Maggert from 31st to 11th in the final Cup standings.