WATCH: Geoff Ogilvy makes walk-off ace you have to see to believe 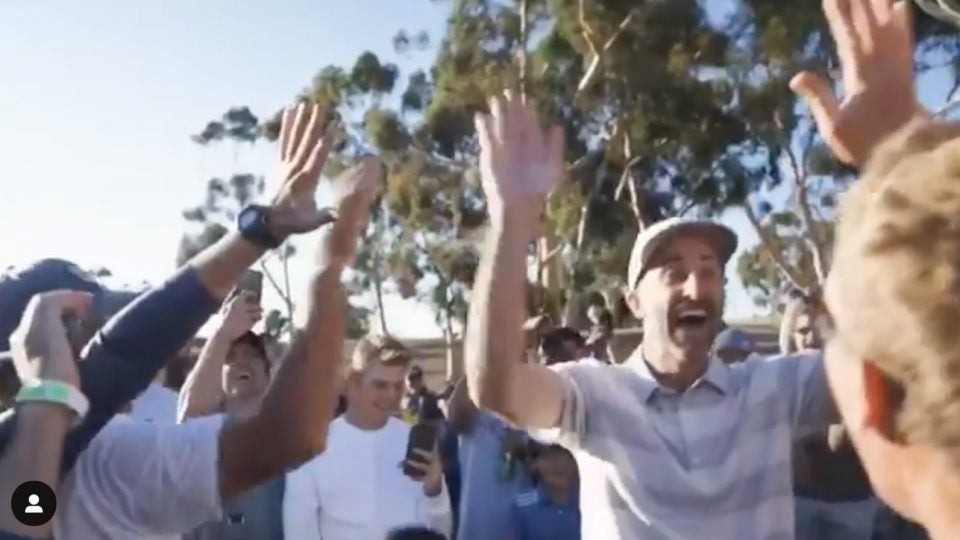 From tied to victory in one swing!
Instagram.com/matt_ginella

Geoff Ogilvy had never hit a shot like the one he did Saturday in Southern California: a walk-off ace to win his charity match against Xander Schauffele and Dean Wilson at Goat Hill Park in Oceanside, Calif.

Ogilvy was teamed up with Chris Riley at the 3rd annual Wishbone Brawl, playing in front of hundreds of fans. When the match with Schauffele and Wilson ended up tied through 18 holes, it was time for a playoff, starting on the par-3 9th.

It’s a short, downhill 132-yard hole that requires a pitching wedge or a 9-iron at the most. Ogilvy grabbed wedge. With the match in the balance, everyone had crowded around the green. In the video below, you can hear someone in the crowd saying, “What’s with the ‘One time’ guys?”

Surely some spectators had yelled ‘One time!’ after Ogilvy made his strike. There was just enough time for that question to linger on everyone’s mind before Ogilvy’s shot flew straight into the jar for a 1.

Goat magic strikes at the Wishbone Brawl today, Nov 23! The match got tied up on hole 18 by a birdie putt by Dean Wilson. Goes to a playoff hole. Geoff Ogilvy, US Open winner, DUNKS a HOLE-IN-ONE (@titleist) to WIN THE BRAWL on hole 9, here at GOat Hill Park. This makes for ACE number 9 for Geoff. DOES IT GET ANY BETTER THAN THIS!? #wishbonebrawl #2019 @espn get a load of this. Top 10!? (Sound on, hear the dunk!) @goathillpark @truly @geoffogilvy @pgatour @golfchannel

Unbelievable! A walk-off ace for Ogilvy! For charity! His 9th career ace! It is seriously difficult to imagine a more exciting shot taking place at Goat Hill, a precious muni for many SoCal golfers. For another view of the madness, check out the post below from Matt Ginella.

As pure as it gets. Pros, persimmons, mini muny, no ropes, more kids than adults, there were even puppies charging greens, all for charity and the good of the game. Today makes me believe in unicorns, guardian angels and Golf Gods. The Goat gives back in magical ways. There are countless tales of the unexpected. @katie.ginella and I had our wedding reception here, which was a good party. And then there was today. Chris Riley and Geoff Ogilvy vs. Dean Wilson and Xander Schauffele in the third annual Wishbone Brawl at Goat Hill Park in Oceanside, Calif. With Wilson and Xander as heavy favorites, it was Riley early who did most of his talking with his putter. Which is saying something. Wilson and Schauffele didn’t have the lead all day. It was all they could do to get even. Which they did on 7, 13 and 18. Which meant there was a playoff. Everyone scrambled to the 9th green, which is a golf coliseum. John Ashworth was proud of the new mulch around the back of the green. The putting surface was littered with long shadows. Wilson went first, middle of the green. Xander was tight, until it spun off the front, down the slope. “Goated!” And then Ogilvy grabbed wedge. From 132. He had hit full wedge over the green earlier. He would dial it back. And he dialed it IN. Swish. As you can see, off the lip. Pandemonium. And the forever question: “Where were you when?” It just doesn’t get any better than what just transpired. Set aside the adults for a second, there were hundreds of kids who walked away reflecting on a day in which they got prioritized, up front, in the mix of all the fun. It wasn’t long, it wasn’t slow, it wasn’t expensive, it wasn’t about the money. It was about giving back, paying it forward, and a can’t-write-that-script finish. “Ogilvy is back!” Was one spectator’s observation. “Chris Riley is still one of the best putters in the world,” was Ogilvy’s first humble retort. But when pressed for more… “It’s crazy! How do you make that up?!” You don’t. You just go to www.wishbonebrawl.com and click on “online auction.” And now we celebrate. Ogilvy is buying! (Video courtesy of @foredagolf & @jbarto22)