WATCH: Four golfers make aces during same outing, and one (for $1 million!) was caught on camera 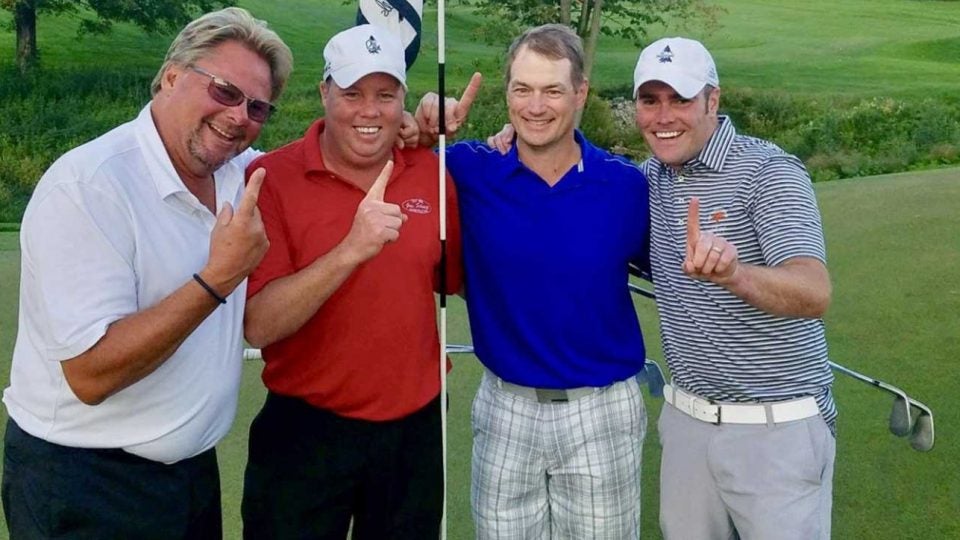 Four golfers made holes-in-one on Thursday at Pine Hills is Wisconsin. One of them, Ted Anderson (second from right), did it for $1 million.
Pine Hills Country Club Facebook

The par-3s at Pine Hills Country Club in Sheboygan, Wis., were picked apart on Thursday night.

And Ted Anderson is $1 million richer.

Per club policy, according to Gary D’Amato of Wisconsin.Golf, who broke down the epic day, when a Pine Hills member who is also in its Hole-In-One Club makes an ace, that golfer gets an outing and dinner in their honor. On Thursday the club was celebrating Reed Schmitt’s ace from earlier this year. Schmitt also bought hole-in-one insurance, so the five golfers who were closest to the pins on the course’s par-3s all had a swing at the 167-yard par-3 9th hole later that evening — with $1 million the prize for an ace.

Then the holes-in-one started pouring in.

Remarkably, Dan Olson, Keith Robel and Jon Rindt all recorded aces during their rounds to secure three of the five spots in the $1 million shootout. Anderson, a 7.1 handicap who knocked it to four feet on the par-3 5th, grabbed one of the other two spots. Then, with a huge gallery watching (and cameras rolling), Anderson made his ace count.

“I put a good swing on a six-iron,” Anderson, 50, told D’Amato. “When I hit it, I thought, ‘That’s pretty good.’ It went behind the hole and started rolling backward and you could hear the crowd buzzing and then it goes in and the crowd goes nuts.”

You can watch the video of Anderson’s ace below.