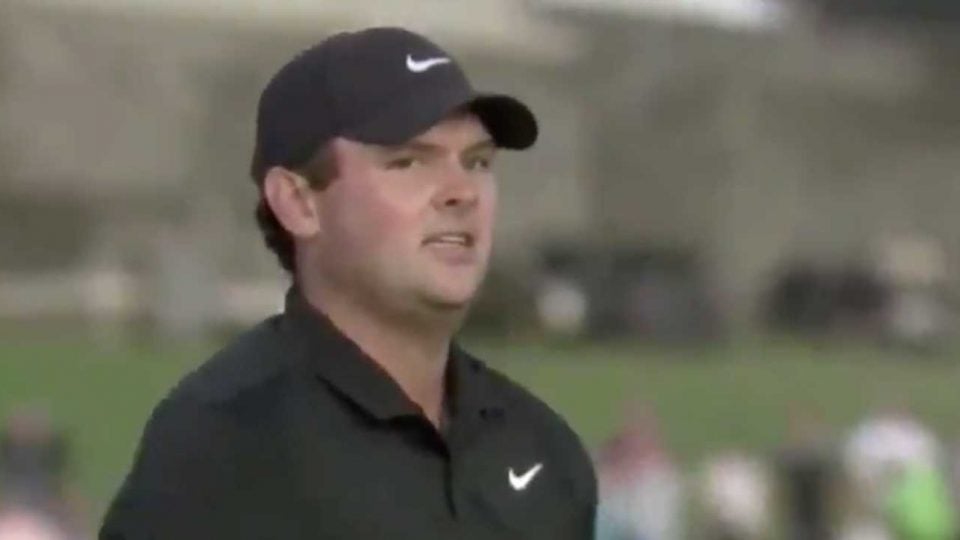 Patrick Reed glares at a fan in the crowd during the playoff.
Golf Channel

Patrick Reed committed a rules infraction in the Bahamas, the aftermath followed him to the Presidents Cup in Australia and it’s still not going away anytime soon, if the final round of the Sentry Tournament of Champions is any indication.

Reed shot the low round of the day, a seven-under 66, to grab the clubhouse lead on Sunday, and that was good enough to later force a playoff with Xander Schauffele and Justin Thomas. Schauffele left the playoff after the first hole, Reed and Thomas both made par the second time around but Thomas won with a birdie the third time they played 18.

But before Thomas sank his birdie putt to win, Reed had a chance of his own. From about eight feet out he watched his ball track toward the cup and miss right, but when it was about two feet from the hole a fan screamed “Cheater!” It led to Reed offering a quick glance in the direction and the Golf Channel team even acknowledging it on the broadcast.

“That was pretty unfortunate,” said Dan Hicks. “You see Reed glaring up into the stands. Someone yelled as loud and as clear as day, ‘Cheater!’ as that ball was racing toward the hole.”

You can view the clip below.

Reed’s recent rules controversy started at the Hero World Challenge in December, when he was penalized for improving his lie from a waste bunker when a replay showed him brushing away sand with practice swings. He said it was an accident, but he still received plenty of grief from fans at the following week’s Presidents Cup. One incident even led to his caddie intervening, which led to his caddie (and brother in law) Kessler Karain being banned for Sunday singles play.