WATCH: Did Tony Finau just unleash one of the greatest club twirls ever? 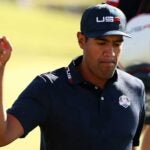 “You just want to look cool,” he continued.

And he’s right. Usually, the shot is too, and this is just an exclamation point. But the ball could also go right. Or left. Or up or down. Either way, the stroke is just the means to an end. And only the finish is important here.

JT, of course, was talking about the club twirl.

While it has taken a few forms, the most basic club twirl consists of this: Player hits ball, player lowers club to just about their hip after the follow-through, player twists club in their fingers — and it “twirls” downward to the turf. You can add sauce to it by extending your arms out, taking a few steps forward or growling.

Or you could do all three on your twirl. This was the form of maybe the GOAT — Greatest of All Twirls. At the 2009 Presidents Cup, Tiger Woods hit an iron into the 18th green at Harding Park and twirled with the ball in mid-air, knowing full well that his ball would finish a few feet from the cup.

“When Tiger does a club twirl, everybody’s watching because something special is about to happen,” Gary Woodland said on a PGA Tour video centered on only that club twirl. “When he did it at the Presidents Cup, when he hits the 3-iron and he club-twirled, you know that’s just — I think that’s the most famous club twirl because he was literally walking when he did it. Most of the time you just, you know, club-twirl while you’re standing there, but he just takes it to a new level.”

Which Tony Finau’s twirl may have gone to this week.

On his Instagram story, Finau posted video of the club twirl and captioned it with:

“What yall know about the one hand club twirl though.”

Have a look for yourself below: