Was Augusta playing too hard, or just right, on Masters Thursday? 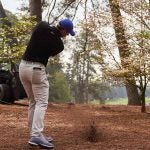 Rory McIlroy was one of several big-name players who couldn't get anything going on Thursday.

Augusta National might have seemed easy for Justin Rose, who leads the 85th Masters after a first-round seven-under 65, but that wasn’t the case for everyone. It was fast and firm as promised, and only 12 players shot under par in a breezy opening round. Brian Harman and Hideki Matsuyama, both at three under, are the closest competitors to Rose. Masters champ Ian Woosnam, who is playing in his 32nd Masters, said “this is about as fast as I’ve seen it.” What do you say? Was Augusta playing too hard on Thursday?

Jessica Marksbury, multimedia editor (@Jess_Marksbury): It’s hard to make the argument that any course is playing too tough when someone shoots 65 — and that’s after Justin Rose was two over though the first seven holes! But there were also plenty of red numbers in addition to the carnage, so the day felt fair and balanced.

Josh Sens, senior writer (@JoshSens): Nah. A very tough combo of firm greens and testy pin positions. More like a U.S. Open than the Masters. But not unfair. Today is just a finger-wag from the green jackets saying, ‘Nope, not going to have another 20-under winning score this time around.’ Fret not. We could get some rain. We’ll definitely see some kinder pin positions. And plenty of pyrotechnics along the way.

Alan Bastable, executive editor (@alan_bastable): U.S. Open feels are fine for one day, but not for all four. I most like the Masters when we see four different setups: make ’em grind and sweat one day, let ’em feast on birdies the next. Keep the boys on their toes.

Michael Bamberger, senior writer: Had to be done. Also, 4 was played from the member’s tee, 3 you could hit driver almost to flip wedge, pin on 16 was easy. Etc. Not too hard.

Zephyr Melton, assistant editor (@zephyrmelton): Heck no! Augusta played just the way it should during Round 1 — it rewarded good shots, and it punished bad ones. Justin Rose showed that there are birdies to be made out there if you are in control of your ball, and others showed that if you get wayward, the big numbers can add up in a hurry. This setup seems to be the perfect mix of rewarding and punishing. I hope they don’t change a thing.

Dylan Dethier, senior writer (@dylan_dethier): The golf course was basically perfect. We wanted crispy. We got crispy! These conditions were forecast all week. The players wanted tough. It rewarded precision and punished sloppy shots. I’m ready for more.

Nick Piastowski, senior editor (@nickpia): I’ll go with it being a little less than fair. Tough conditions like this bring out the best of the best, and that’s what we want in a major, and certainly from the Masters. But a story from Webb Simpson stands out to me. On 14, he hit a drive down the middle, and he said he had a 9-iron in — “and I did not think I could hit the green. Straight downwind, and you obviously can’t land it short there, and I landed it two yards short of the hole, and sure enough, it went over the green.” That sounds a little extreme to me.

Sean Zak, senior editor (@sean_zak): Augusta National was playing exactly how it should be. Corey Conners said so. Kevin Kisner said something of the sort. Sergio agreed it should play like this every year. There was a time in the mid-2000s where the scoring average was 75 or 76 during the first round every year. Today was tough and it still wasn’t even at 75 strokes per round.