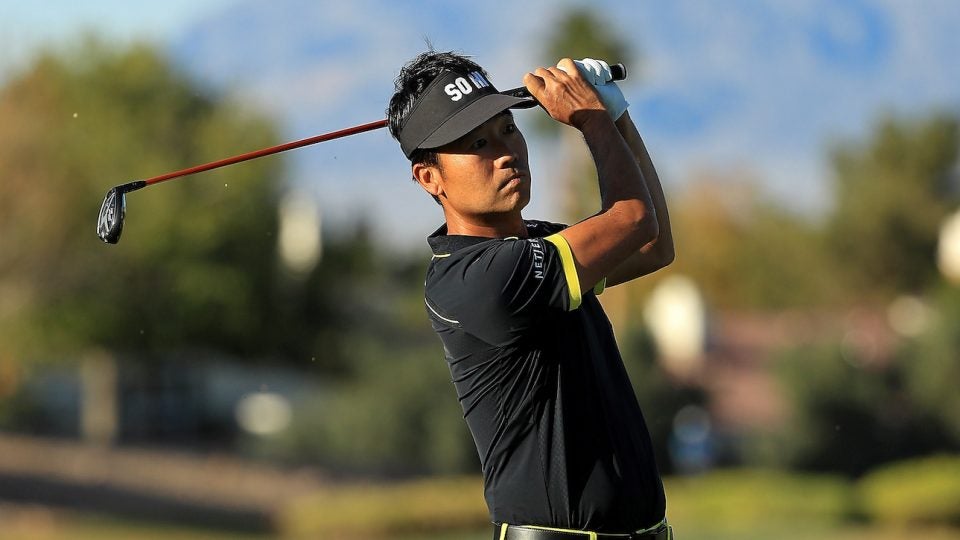 Na walked away from his staff deal with Titleist midway through last season and won at the Greenbrier with a mixed setup consisting of TaylorMade, Callaway and Titleist equipment. Callaway’s GBB Epic driver just happened to be the first non-Titleist club to make the cut after his departure.

There’s been no confirmation of Na signing on the dotted line with Callaway, but it does seem curious that he’d suddenly add a number of the company’s clubs during a team event where there’s little pressure to break in new gear for the first time.

Is Na Callaway-bound? With January just around the corner, we won’t have to wait very long for an answer.

The JPX 919 Tour has been trending upward since it was first introduced on Tour at the Dell Technologies Championship. Kevin Tway logged his first Tour win with a mixed set of JPX 919 Forged and 919 Tour at the Safeway Open. Mizuno was the iron option of choice for a number of high-profile free agents last season, so it’ll be interesting to see who else decides to choose 919 Tour.

Brooks Koepka, who currently plays Mizuno’s JPX 900 Tour, was supposed to test the irons — along with some new Mizuno woods — during the winter break.

Pepperell won’t have to buy his next putter

The general assumption is that every professional golfer gets his clubs gratis. Not even close. Some players still have to dip into their own bank account when it comes to, say, a new putter. In Eddie Pepperrell’s case, he forked out his own hard-earned cash for four Bettinardi Studio Stock 8 at Core Golf UK in 2017.

He won’t have to worry about paying for the next one after coming to terms on a putter agreement with Bettinardi. The most interesting note regarding Pepperell’s current Carbon Studio Stock 8 is that it happens to be one of the company’s production versions — meaning any recreational golfer can pick one up.

Cody Blick went through a nightmare scenario during the final round of Web.com Tour Q-School when he awoke to find his golf clubs had been stolen from the house he was staying at for the week. Blick initially offered a $5,000 reward for the safe return of the clubs, but when they never showed, he was forced to make a last-minute decision, cobbling together a makeshift set in an attempt to earn his card.

Cody Blick (@codyblick) woke up this morning and realized his clubs had been stolen.

He proceeded to fire 63 with the Superintendent’s driver, pro shop’s wedges, random irons and a heavier than usual putter to earn guaranteed @WebDotComTour starts #Tourjectory pic.twitter.com/nhFOAveCs6

Outside of a 54-degree wedge that used to reside in his bag, Blick built the rest of his setup from scratch. The superintendent offered up his driver; the pro shop came through with a through with a couple wedges; and the rest of the setup consisted of a “random” set of irons and a putter that had a heavier head weight than his usual flat stick.

Despite dealing with every equipment hurdle imaginable before he teed off, Blick still managed to birdie his last three holes to finish T25, guaranteeing him starts this season on the Web.com Tour.

You can add Luke Donald to the list of players currently gaming Mizuno’s yet-to-be-released ST190 driver. Unlike the version Keith Mitchell started using during the FedExCup Playoffs, Donald’s ST190G has a few more adjustable features in the sole.

New Driver Alert ? Absolutely loving the new Mizuno ST190 driver. Time to put it to work at this weeks @qbeshootout – out tmr at 10.15am paired up with @andrewlandrygolf #Mizuno #Driver #st190 #tiburon #qbe #naples #drivergoals

The rib-like design on the sole is reminiscent of its predecessor, the ST180, but has been reimagined with a look that was tweaked slightly. With the previous version, the ribs positioned mass deep in the head, further lowering the club’s center of gravity.

Michael Gellerman shot 60 at Web.com Tour Q-School with a set of Srixon Z 785 irons and the brand’s new Z-Star prototype golf ball to earn status for next season. Both pieces of equipment just happened to make the cut within the last month.

Along with Gellerman, Ryan Palmer recently replaced his nine-year-old Titleist 710 AP2 irons with a set of Z 785’s. Recent chatter from Tour is that a number of players have been requesting sets of Z 785 irons to test, with the possibility of putting them in play next month.

The earliest adopter of Ping’s Blueprint prototype irons, Louis Oosthuizen won the South African Open for the first time with the forged blades. Little is know about the design, aside from the fact that it has a slightly smaller blade length than iBlade and minimal offset, making it perfect option for Tour professionals. The weight port located in the toe is likely designed to help with CG position and forgiveness. It’s unclear if any irons in the set feature hollow-body construction.