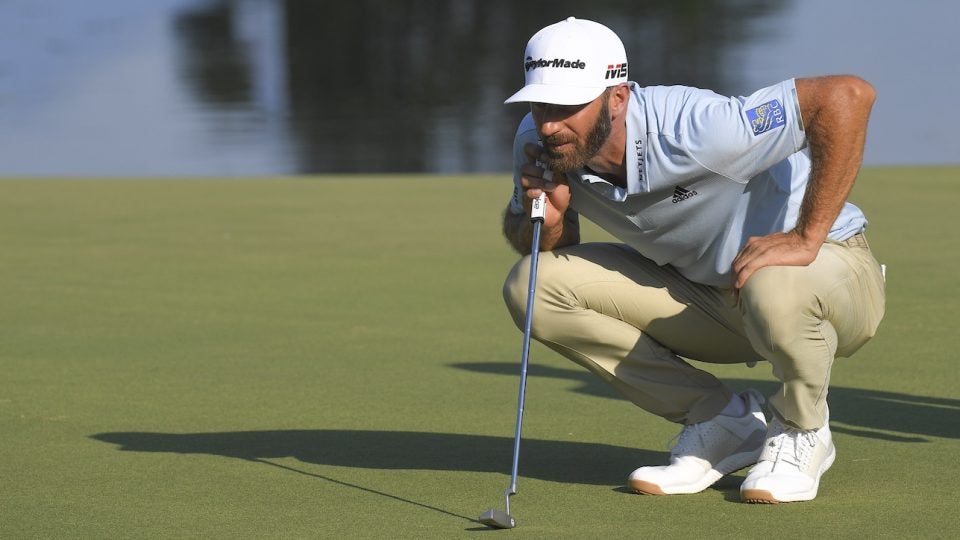 Dustin Johnson’s frequent putter tinkering has been well-documented in this weekly gear column. With the flatstick once again lagging behind the rest of his game, another change was made in Memphis, as Johnson shelved TaylorMade’s Spider Mini Copper for an Anser-style TP Juno Prototype.

Johnson has bounced back and forth between mallets and blades in the last few years and admitted it was time for a change after trying a number of different Spider mallets.

“I just feel like I was having a hard time matching my line and speed,” he said. “I was hitting good putts with the Spider, I just wasn’t making anything. I felt like, I don’t know, I have a little bit better feel with this putter.”

As if changing putters wasn’t enough to earn a spot in this week’s gear notes, Johnson chose to up the ante, changing grips mid-round on Thursday after opening with three bogeys, a double and two birdies. Johnson switched from a conventional grip to cross-handed (left-hand low) — and suddenly things started to click. 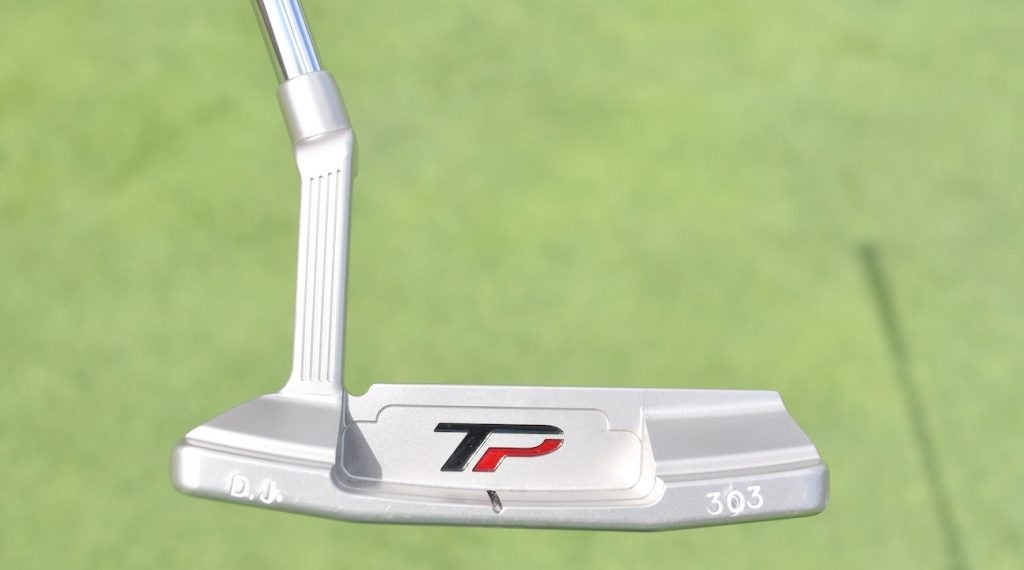 “I just figured it couldn’t get any worse, so why not try something new,” he said. “And I’ve putted cross-handed a few times, not very much. It more helps my setup and helps me get my right arm a little bit. Helps me stroke it down the line a little bit better. So yeah, it worked.”

Even with the strong finish to the first round, Johnson continued to struggle with the putter at TPC Southwind. Outside of a plus-2.066 strokes gained: putting performance during the third round, Johnson lost shots to the field during the other three rounds. He finished 37th in the putting category for the week.

Given how quick Johnson has been to give the putter hook recently, it wouldn’t be a shock to see him perform another shakeup during the Tour’s playoffs.

Reports have indicated Callaway, TaylorMade and Ping all had drivers fail the R&A’s CT test during The Open. That might not be entirely true after Chance Cozby, Ping’s vice president of sports development, confirmed one of their drivers was deemed to have been damaged.

“We did have a driver deemed damaged at The Open by the R&A,” Cozby told GOLF.com. “This driver had been in play for approximately 16 months on the PGA Tour and was well within conformance when built. We built the player one new driver and he was satisfied after a short testing.”

The driver in question belonged to Patrick Reed, who cracked the face of his Ping G400 LST.

Speaking of Patrick Reed, the former Masters champion tried out two new drivers in Memphis — a smaller-headed TaylorMade M5 Tour (435cc vs. 460cc) and Ping’s G410 LST. A crack on the face of Reed’s Ping G400 LST — a driver he’d been using going back to the 2018 Masters — forced him to entertain other options. Reed tried M5 Tour on Thursday before tossing a curveball and going with a standard G400 head on Friday. 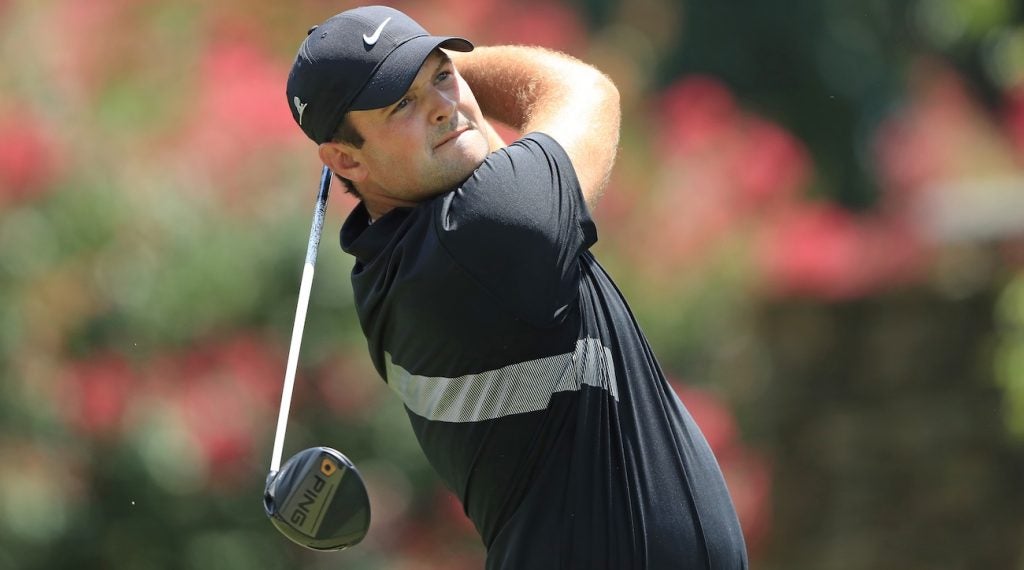 Patrick Reed was seen using a Ping G400 driver during the second round.
Getty Images

When you’ve used the same driver for 16 months, as Reed had with G400 LST, the search can be arduous. Considering G400 doesn’t have the same spin characteristics as the LST model, it’s worth tracking if Reed eventually finds his way back into the low-spin head. He was spotted testing a G410 LST at the beginning of the week.

Rory McIlroy’s preferred wedge setup was three TaylorMade Milled Grinds until the week prior to this year’s U.S. Open when he added a fourth wedge and tightened the loft gaps (48, 52, 56 and 60 degrees) for better distance control. McIlroy has continued on with the same wedge setup — with one exception. Instead of using a Milled Grind Hi-Toe lob wedge, McIlroy recently switched to a more traditional Milled Grind profile in the 60-degree.

Hideki Matsuyama’s putter was easy to spot during the first round of the WGC-FedEx St. Jude Invitational. Next to Brooks Koepka’s Scotty Cameron T10 Select Newport 2, it was the only other putter sporting a bronze-colored insert made from Teryllium — a copper alloy that helped put Cameron on the map in 1997 when Tiger Woods used an original version of the iconic Newport TeI3 to win the Masters.

With Cameron rolling out a Tour-only version of the putter, Matsuyama received his first look at the new Teryllium on Monday at TPC Southwind. Matsuyama spent the next few days testing the blade and then decided to put it in play for the first time over his “ace” Newport 2 GSS.

Matsuyama had refrained from trying new putters in recent months — he’s known to carry four to five putters with him during a tournament week — before briefly giving a Tiger-esque Newport 2 GSS a shot in Detroit. He would eventually go back to his usual Newport 2 GSS shortly thereafter.

Scotty Cameron Tour rep Drew Page confirmed Matsuyama is the first tour player to use the Tour-only Teryllium TNP2 prototype (Cameron Studio Design grip) in competition. The putter has two 10-gram heel-toe sole weights and a sightline in the flange. Matsuyama had the putter made to his specs at Cameron’s studio, with the length set at 34.75 inches and loft/lie at 2.5 and 71 degrees.

Callaway’s Apex MB irons are already available in a chrome and oil finish. You can add a Tour-only black finish to the list after Sergio Garcia rolled into Memphis with a fresh set of sticks. Garcia appears to be the only player on tour with the “Batman irons,” which appear to have a dark rust-resistant coating.

Sergio Garcia has some new @CallawayGolf Apex MB irons in the bag. The black finish is ridiculously clean. pic.twitter.com/pRfrClHb53

With new product releases on tap as the season winds down, it’s worth keeping an eye on Garcia’s irons to see if the finish turns into a retail offering at some point.

One week after Alex Noren replaced his Callaway Apex Pro 16 irons with the updated 2019 version at The Open, the Swede added a 13.5-degree Epic Flash 3-wood to the bag. During testing, Noren was impressed with the strong trajectory of the fairway wood, which ultimately led to a change near the top of the bag.

Quick-hitters: Dustin Johnson tested a myriad of driver shafts but opted to stick with the Fujikura Ventus “LT” prototype he started using at the Masters. … Tommy Fleetwood recently traded in his Callaway Mack Daddy Forged wedges for Titleist’s Vokey TVD. … Poom Saksansin switched to an Axis1 Rose putter. … How should players with a non-conforming driver be punished? Bryson Dechambeau has an idea. … Justin Thomas replaced a driver before the Open Championship that was “getting close” to the legal limit. … The story behind the shamrock stamp on Shane Lowry’s Srixon golf ball. … LA Golf introduced a new line of Tour-only “TPHDe 2” prototype shafts. … Breakthrough Golf Technology created a slimmed-down version of its Stability putter shaft that’s 33 percent thinner (and 20 percent stiffer) than the original. Overall weight was reduced slightly (115 grams vs. 120 grams) and the feel was softened.