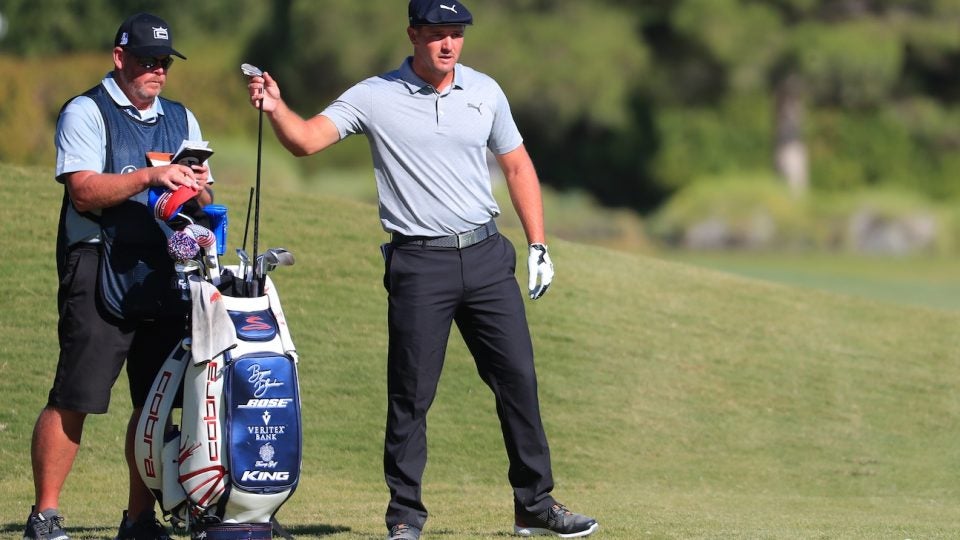 Welcome to Wall-to-Wall Equipment, the Monday morning gear wrap-up in which GOLF equipment editor Jonathan Wall takes you through the latest trends, rumors and breaking news. This week’s notes are highlighted by Bryson DeChambeau’s bag of graphite, a slimmed-down Phil Mickelson adding weight in other areas and Matthew Wolff changing golf balls.

In 2002, Rich Beem made equipment history when he became the first player to claim a major championship (PGA Championship) with graphite-shafted irons. The victory was hailed as a major victory for Aldila’s Tour Gold graphite, which not only resided in every one of Beem’s TaylorMade irons but his woods and wedges as well. Only his STX Sync Tour putter featured a steel shaft.

The assumption was graphite might see a usage uptick on Tour after the victory — only it never happened. For the most part, graphite continued on as a distant second to steel in the iron and wedge shaft department.

Seventeen years after Beem put graphite-shafted irons on the map, Bryson DeChambeau took it one step further in Las Vegas, becoming the first player to use 14 graphite-shafted clubs on the PGA Tour, including the putter, en route to a T4 finish at the Shriners Hospitals for Children Open.

“The switch to the graphite, it’s working so far,” DeChambeau said on Sunday. “I have to do some more testing and figure out — and just get used to it. This was my second week on Tour with graphite shafts, so that is kind of weird. First week playing the full set, and finishing 20-under par shows it does work. The main key is the stability in the shaft. We have shafts in there that are incredibly stiff, so it’s helped for consistency and repeatability through impact.”

DeChambeau made a surprise change two weeks ago in Napa when he added LA Golf’s “Rebar” graphite to his Cobra wedges. He continued the shaft overhaul shortly thereafter, adding the shafts to his Cobra King One Length irons.

“[I]t’s pretty cool to see the consistent ball spin rates in wet and dry conditions; the ability to control the ball flight in the air is on a different level,” DeChambeau said. “It’s not moving as much. It’s more stable in flight.”

According to John Oldenburg, LA Golf’s chief product officer, the shaft is also noticeably stiffer in the tip with lower torque.

Phil Mickelson has continued to shed the pounds while adding heft to one particular piece of gear — the putter. Mickelson shelved is usual Odyssey #9 mid-mallet for a high-MOI Stroke Lab Ten prototype in Las Vegas, citing his success inside 6 feet as the reason for the change.

“I made every putt inside six or eight feet and didn’t give away any shots because of that,” Mickelson said. “It feels much easier to do that with this putter, which is why I’ve gone to it.”

Mickelson has spent the majority of his career using the same heel-shafted head shape, but he’s gone outside of his comfort zone on occasion. During the early 2000s, Mickelson became the first player to use Scotty Cameron’s Futura mallet in competition. 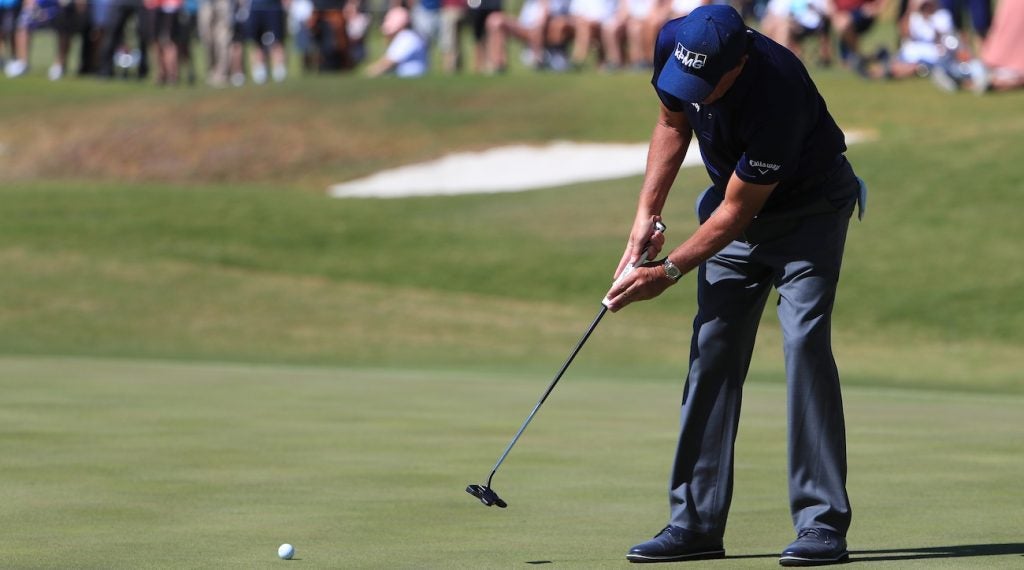 Phil Mickelson has rarely employed a mallet putter over the course of his illustrious career.
Getty Images

His latest run with a full-blown mallet represents a significant shift away from a putter that’s served him well over the years. Mickelson’s Stroke Lab Ten features two weights in the heel and toe that drive up the overall stability of the head and reduce twisting at impact. A small sightline is visible on the front portion of the crown, along with Mickelson’s usual White Hot XG insert and “the right hosel, right amount of offset.”

“Putters is a very hard thing for me to get fitted in,” Mickelson said. “I usually use a mallet or a blade and there are reasons for that, the way I stroke and the way I set up to it.

“So it’s very hard to get the right look, feel, performance that I’m looking for from a putter because I don’t stoke it the same as a lot of guys do. The first few putts I hit with this I noticed a real difference. It was more stable. It’s got stability — doesn’t block. Usually those mallets I block them. Don’t block that one.”

Mickelson got off to a hot start with an opening 65 but went on to finish 61st in Las Vegas.

Ryan Ressa, TaylorMade’s manager of product development, spends the majority of his time working with top-ranked amateurs who use the company’s equipment. But with Matthew Wolff and Collin Morikawa making the jump to the PGA Tour last season, Ressa set aside time to ensure both were comfortable making the transition into TaylorMade’s TP5 and TP5x golf balls during the offseason.

Morikawa switched to the TP5x in Napa, while Wolff made the jump to TP5 in Las Vegas after noticing a slight reduction in spin with his scoring clubs.

“He likes to see a little bit more spin on every club he hits,” Ressa said. “But with his stock wedge shots, he’s used to ripping them back and having to adjust. He figured the TP5 would be pretty close to the [Tour Preferred X] he played in the past, so we gave him some balls to test for the last month and a half.

“The one thing I noticed when I went out to [Stillwater, Oklahoma] to watch him test on the course at [Karsten Creek Golf Club] was how dialed he was with the wedges. He normally hammers his wedges, and with the TP5, he could hit his stock shot to the number and not worry about ripping it back. That little bit of decrease in wedge spin is important.”

Mizuno’s MP-20 iron line launched earlier this year at the Open Championship, but a majority of players waited until after the end of the season to make the transition — Keith Mitchell included. The 2019 Honda Classic champion recently swapped out his MP-18 irons for a set of MP-20 blades.

The MP-20 was designed with a thinner topline than the MP-18 as well as a progressive design with minimal taper and lower sweet spot in the long irons for higher launch; a moderate taper in the mid irons for mid-launch; and the most taper in the short irons for a higher sweet spot and lower, controlled trajectory.

The iron incorporates Mizuno’s Grain Flow Forged HD process — which compacts more grain structure in the hitting area to improve feel — with a copper underlay. The very thin copper layer, which lies beneath the satin mirror chrome finish and a layer of nickel, mimics the soft feel found in the classic TN-87 model. 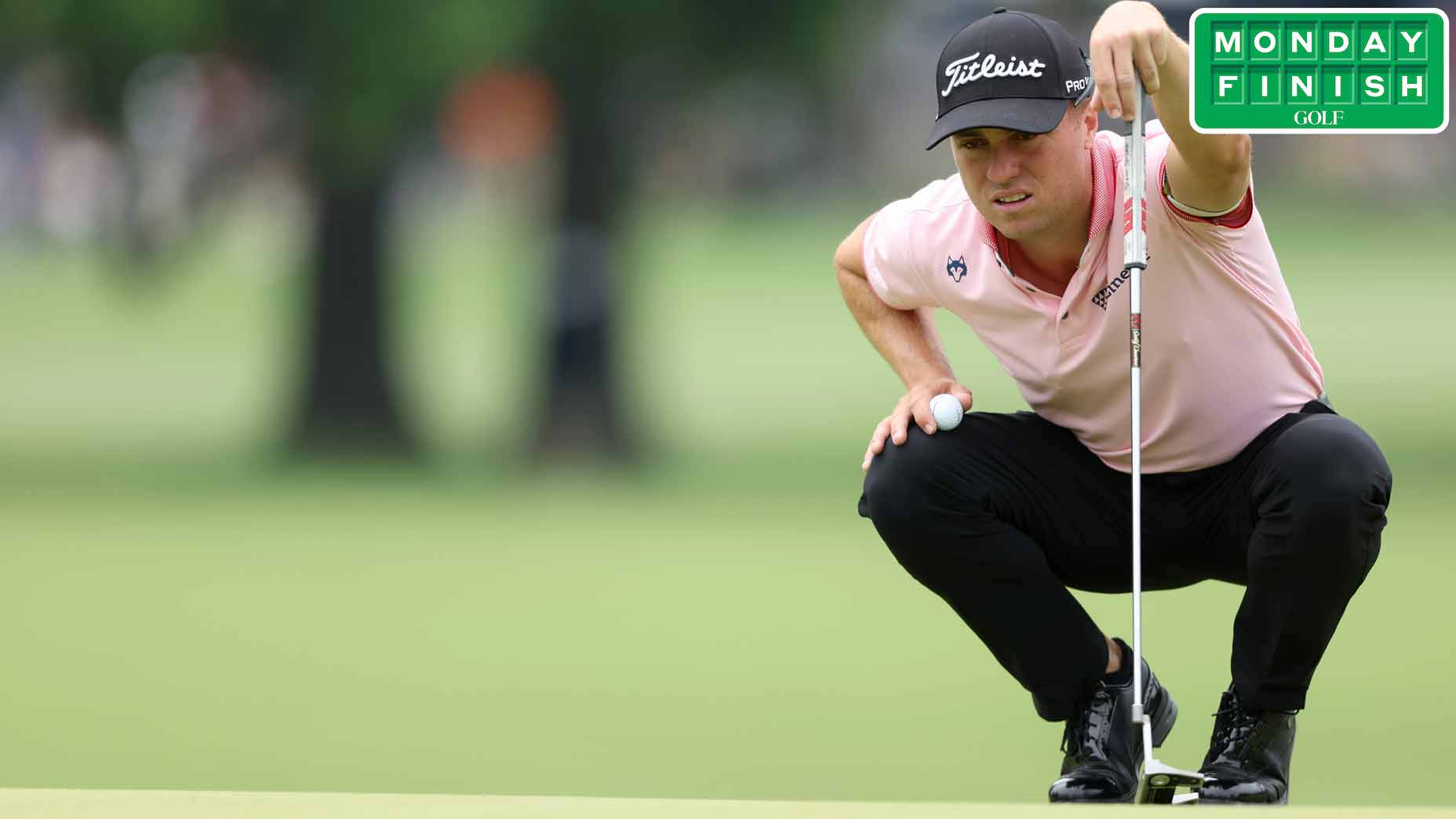