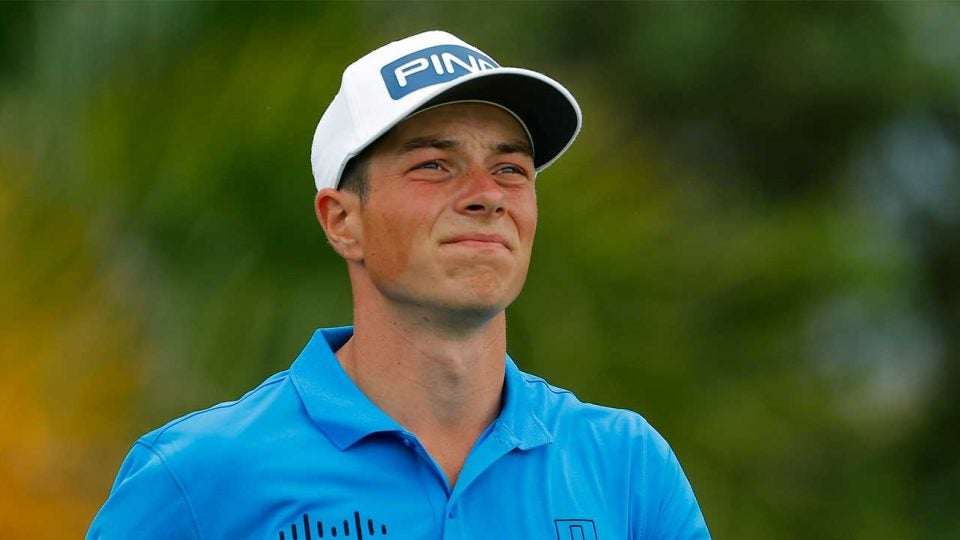 Viktor Hovland closed with a 70 to win the Puerto Rico Open.
Getty Images

Viktor Hovland rolled in his winning putt with authority.

The 22-year-old birdied the 72nd hole to win the Puerto Rico Open on Sunday in style and claim the first victory of his PGA Tour career.

Hovland’s birdie was good for a two-under 70, which put him at 20 under overall and one ahead of American Josh Teater.

Hovland led by one after 54 holes thanks to Saturday’s eight-under 64, which was bested by only two players all week.

“Hopefully, I just continue doing what I have been doing the first three days,” Hovland said on Saturday night. “It would be unbelievable to have won on the Tour already, but I’m just worried about [Sunday]. Hopefully, I can hit some good shots and make some putts.”

Hovland was one under on the front on Sunday and birdied the 10th, but a disastrous triple-bogey 6 on the par-3 11th erased his lead and put his tournament hopes in jeopardy. But no matter, he bounced back by showing gorgeous touch around the green to chip in for eagle on 15 and then clinched the victory with a birdie on 18. Check out the eagle and winning putt below.

It never left the pin. 💯

Viktor Hovland chips in for eagle. 🦅

He takes a 1-shot lead coming down the stretch at the @PuertoRicoOpen.#QuickHits pic.twitter.com/wbBXsUr8rK

What a way to capture your first win …

Hovland was a big-time collegiate player at Oklahoma State but became well-known by hardcore golf fans after he won the 2018 U.S. Amateur at Pebble Beach and was the low-am at both the 2019 Masters and U.S. Open.

Hovland also becomes the first player from Norway to win the PGA Tour. Oh, and if you were wondering what that winning call sounded like in Norwegian, check that out below.