‘Target golf’: TPC Sawgrass to play soft this week — but brutal this weekend

PONTE VEDRA BEACH, Fla. — In 1999, David Duval won the Players Championship with a record-high score of three-under 285. He and Scott Gump (one of golf’s all-time names) were the only players to break par. The reason? TPC Sawgrass was playing firm and fast — and then the weather turned, transforming the course’s style of target golf into a survival test.

Twenty years later, the tournament has returned to its March date, but things look a whole lot different than they did that year. Still, that doesn’t mean the 2019 iteration will be easy, especially when the weekend hits. So what to expect from TPC Sawgrass this week?

Tiger Woods tackled the differences. “It’s just so much slower,” he said. “It’s not as warm. The ball doesn’t fly as far and the golf course just plays slower. The only year I really remember it being just brutally hard and fast was when David won.”

That year, Woods shot 75-75 on the weekend and dropped just three spots on the leaderboard, from 7th to 10th. That won’t be the case this year. Heavy overseeding in advance of the 2019 edition of the Players has resulted in an emerald-green golf course, and heavy rains have pitched in to make Sawgrass as soft as it has been in memory.

I have walked the 18th fairway at TPC Sawgrass twice in my life – March 2010 and March 2019. What a difference 9 years (and a TON of overseed!) makes… pic.twitter.com/SMxCUCQGVr

The result? Target golf. Justin Rose, for one, doesn’t mind the change.

“It’s a stadium-style course, a target-style golf course,” he said. “I don’t think it was designed to be firm and fast and running and bouncy and out of control. I think the targets are there to be hit. And if you do, you get rewarded.”

I think the targets are there to be hit. And if you do, you get rewarded.

While temperatures are expected to hit the 70s Thursday and Friday, the weekend is another story. Saturday and Sunday will start with temperatures in the low 50s with wind and scattered showers expected, which means that the soft, receptive course may start to seem awfully long.

“It’s going to get cool, it’s windy,” Woods said. “We’re going to have to hit more clubs off the tees, have a little bit longer clubs into the greens, but the difference is the greens are much slower and much more receptive.”

“It’s so much easier in May because, I mean, it’s a nothing tee shot because it’s always downwind,” Woods said. “We always got the south wind here. And it’s just some kind of hybrid or 3- iron for me or even a 5-wood and some kind of wedge or 9-iron to the green. Flip it to March, and it becomes very different hole. Now you’re forced to hit driver, and from there it’s going to be a tough fit, and generally if you have a north wind, it’s slightly off the left, and off the left and with that hazard, it’s a tough tee shot.” 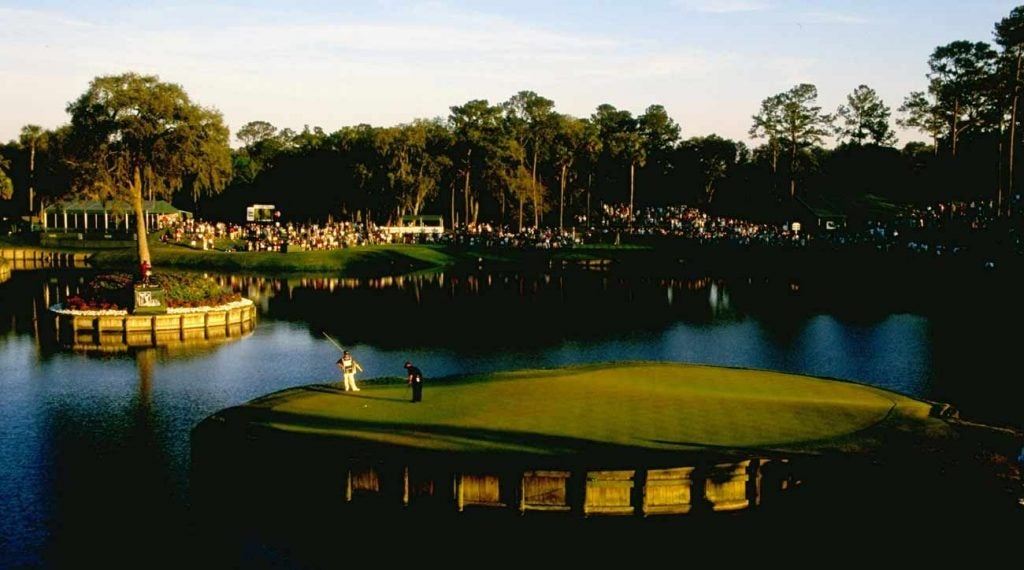 When David Duval triumphed in 1999, he was playing a different golf course.

Play on the iconic 17th hole was plenty revealing, too. On Wednesday morning, Patton Kizzire fired a short iron directly at the flag. His ball landed inside a foot from the hole, leaving a deep gouge of a ball mark before spinning to a dead stop just inches later.

But the green’s receptive nature may be mitigated by the low temperatures and swirling wind. During Tuesday’s practice round, going at the back right pin meant holding a cut against the right-to-left crosswind or starting a draw over the water and riding the wind. At 147 yards, most players were hitting eight-irons, but into the wind on a cold Saturday morning, that could turn to a flighted seven, at least.

“Knowing the fact that I’ve been between six-iron and five-iron on 17 to hit the shot, not too many people can say that, unless they’ve played in March,” Woods said. Rose added that it “completely changes the complexion of the golf hole.” 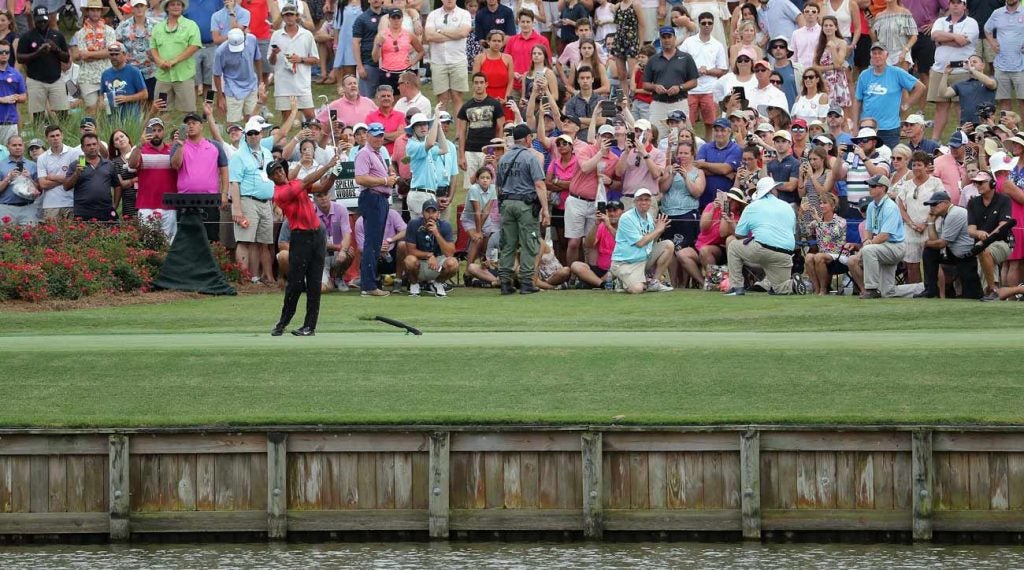 Last year, Tiger Woods hit wedge off No. 17 - and dumped it in the water.
Getty Images

Rose wasn’t the only player referencing the course’s target-golf style. “There’s very small targets you can hit. But I think with it being a little softer, we can play a little more aggressive and hopefully make a few more birdies,” Aaron Wise said. “You’ve got to hit a lot of quality shots on those holes. If you don’t, you get really penalized for it.”

When it comes to No. 17, not all experience is necessarily good experience. “In terms of playing here, I don’t have many great golf memories, other than I made a 10 on number 17 and I didn’t hit my first two shots in the water,” Thomas said. “So I’ll let you try and figure that one out.”

And when tackling the island green, ignorance can be bliss. As Kevin Kisner filmed closely on his phone, Tour rookie Martin Trainer teed it up on 17 for the first time and took a particularly bold approach. He fired a high, slinging draw over the right water and over the back pin, where his nine-iron grabbed on the back edge of the green. When he poured in the birdie putt, he raised his arm to the assembled crowd lounging in the sun, who gave a tepid smattering of applause.

This is practice, after all. Thursday, they count.