One of the wildest stops on the PGA Tour, the Waste Management Phoenix Open, had a strong leaderboard after 54 holes and one of golf’s most thrilling closing stretches to test the field with on Sunday at TPC Scottsdale. Here’s what you missed in the final round.

How it happened: Tony Finau, who just recently moved to the Phoenix area, held the 54-hole lead at TPC Scottsdale, ahead of Webb Simpson by one and Hudson Swafford and J.B. Holmes by two. Finau, Simpson and Swafford were in the final group on Sunday, yet there were few fireworks on the front nine. Simpson and Finau combined for just one birdie on the front (from Simpson) and made the turn tied for the lead at 15 under. Simpson birdied 10 to get to 16 under and lead by one, but Finau made his first two birdies of the day on 12 and 13 to re-gain the lead. After Simpson bogeyed the 15th, Finau led by two with three to play. They both parred 16, but Simpson picked up a stroke when he drove the par-4 17th and two-putted for birdie. Both players had birdie putts on 18, and Simpson went first, rolling his in from 18 feet to put the pressure on Finau. Finau had just nine feet to win, but he missed it on the low side, setting up the playoff.

Travel
Course Rater Confidential: What are the 3 best TPC courses?

The playoff: Playing the par-4 18th once again, Finau found the fairway bunker and wedged on to 19 feet away. Simpson striped it down the middle and hit his approach to 11 feet. Playing first, Finau missed his putt out to the left, which left the door open for Simpson to knock his right-to-left bender into the heart of the hole.

Why it matters: It’s the sixth PGA Tour victory for Simpson, who has been superb to start the year. In his three other starts this season he’s finished T7, 2nd and 3rd.

Another close call: Finau’s lone PGA Tour victory remains the 2016 Puerto Rico Open, an alternate event to the WGC Match Play. In the time since, few golfers have contended as often. Finau now has 29 top 10s since that victory — as well as six runner-up finishes. 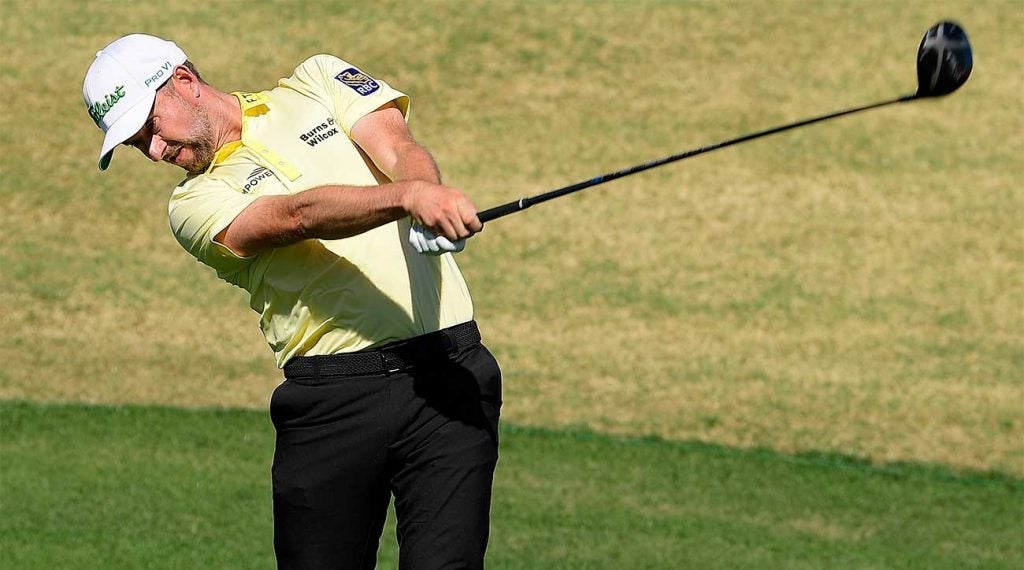 Webb Simpson tees off during the final round of the Waste Management Phoenix Open on Sunday at TPC Scottsdale.
Getty Images

Best bounce back from a costly swing: Trailing by one with four to play, Simpson yanked his tee shot to the left on the par-5 15th and watched as it bounced a few times before hitting a tree and ricocheting into the water. It led to a bogey and turned a one-shot deficit into two with three to play, but Simpson still birdied two of the last three to force the playoff.

Worst start: Xander Schauffele started the day three shots off the lead, but the four-time PGA Tour winner was still considered one of the favorites to win. That changed, however, when he bogeyed four in a five-hole stretch and shot 39 on the front nine. Schauffele shot 74 and finished T16.