The 2019 U.S. Open is set to begin this week at Pebble Beach Golf Links, as the national championship will be played at Pebble for the sixth time ever and the first time since 2010.

This year will also be the first time since 2005 that USGA CEO Mike Davis will not be handling U.S. Open course setup. Instead, newly-minted senior managing director of championships John Bodenhamer will be running the show at Pebble Beach.

Bodenhamer has been with the USGA since 2011, but he’s about to experience a new level of public scrutiny, given all the recent player complaints about the USGA’s setup strategy. Rory McIlroy, Phil Mickelson, Tiger Woods, and Zach Johnson are just some of the Tour pros who have publicly griped.

In an interview with GOLF.com, Bodenhamer broke down how Pebble will play this week, its changes and renovations since it last hosted the Open and how it now compares to the setup from the Pro-Am in February. 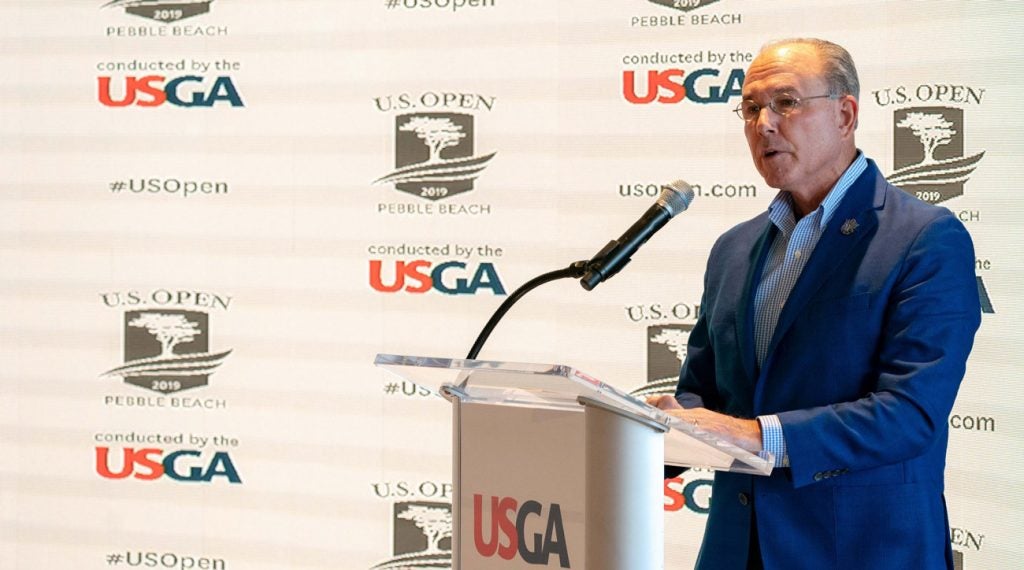 John Bodenhamer is responsible for course setup at the U.S. Open for the USGA.
USA Today Sports

There’s been a lot of complaints from Tour pros over the USGA’s recent U.S. Open setups. What do you make of all the criticism?

Well, we’re golfers too. We listen, we read. I think it’s important for us to listen to those voices. Rory [McIlroy]’s a past champion. There’ve been other past champions that have commented. I think we are listening and we are talking to a lot of our past champions. There’s a lot of players, not just past champions, who care deeply about the USGA and the U.S. Open. They’re rooting for a great U.S. Open, which we’re going to have this year. Sure, there’s some things people have said that have been critical, and we’re taking it all into account. We feel good about where we are and looking forward to a great U.S. Open.

How much player consultation and input do you seek when planning a setup like Pebble this week?

I think [communicating with the players] is something that’s a little bit different this year than it has been in past years simply because we have a player on staff now that we’ve not had before, Jason Gore, and he has been wonderful. I think Jason’s been able to engage with players and past champions at a level of being a player. He knows those guys, he has relationships with them, he’s won on the PGA Tour. He has their respect, and they speak the same language from a player’s experience standpoint. I think that’s been really, really good because he’s informed our preparation and setup process. We just are really benefiting from that. Nick Price came onto our board a couple of years ago. Nick’s a former world number one, and one of the finest human beings ever, golfer or not. He’s coming this week and he’s going to be involved in our process. But I think that’s important. listening to our past champions and having that perspective from Jason. This year we’ve been informed by other voices that frankly, in the past, we haven’t been. I think it’s helped us.

This is your first year taking over course setup duties from Mike Davis. How similar or different will your philosophy be to your predecessor?

Well, I guess everybody is different in some ways and I guess I have some things that I would do a little bit differently. Generally the philosophy of what we try to achieve is going to be unchanged. We’re going to set up a tough and comprehensive test for the players because we want them to win something special when they get to Sunday and that eventual champion raises the trophy with the goddess of victory on top. That’s important to us. It’s just going to be the U.S. Open at Pebble Beach as it always has been. I think there’ll be a few differences from Mike, but not much. I think the philosophy will stay the same as what the U.S. Open’s have always been. I think we know the climate that we’re in where we’re paying attention very carefully to how we prepare the golf course and the way we set it up.

What are some of the major changes and renovations to the course since it last hosted the U.S. Open in 2010?

I wouldn’t say anything major. It’s Pebble Beach being Pebble Beach, for the most part. But there are some differences. There are four putting greens that have been renovated and basically restored. The ninth green has been worked on a little bit and there’s a new front left hole location. 13th green, which was a very severe green, has now been enlarged a little bit and restored with some new areas that we can use for hole locations that we couldn’t before. Both 14 and 17 were really restored to more of what the architect originally intended for it to do. So those four greens 9, 13, 14 and 17, are different and we think that the restoration of those is a great improvement. A new teeing area that was added a few years ago on number nine adds about 21 yards for that par 4 when played from the very back. The only other thing, really, that’s different is that a little bit of the fairway on number 11 has been rerouted from the right-back to the left, where it originally was. And at 14, we had a runoff left of the green that’s no longer there which is all rough again. So it’s really going back to what the U.S. Open has always been at Pebble Beach.

Do you think the course this week is going to play similarly to 2010 and the other instances it hosted the U.S. Open?

I do think it will be fairly similar. I think each one of the previous Opens at Pebble has had subtle differences that largely related to the weather. In 1992 when Tom Kite won, the wind blew 35 miles an hour the last day. It was brutal. I was here watching it and it was almost unplayable. When Jack Nicklaus won in 1972, the wind blew hard, too. But when Tom Watson won in 1982, it didn’t as much. That’s really the one difference. But when the wind blows and it gets warm and blustery, you get a little bit of firmness on the putting greens like we did in 2010. That’ll probably be different this year. But by and large, what the golf course will look like with the fescue around the bunkers, the rough and the fairway widths will be almost identical. I think they’re pretty much identical to 2010.

Tournaments
Okay, you try it! 8 pros on how they would handle the U.S. Open setup

Pebble Beach hosts its own Pro-Am every February. Many fans might assume that event is a good indicator of what’s to come at the U.S. Open in June. What’s the biggest difference in the course between those two events?

You’ve got a couple of things that are different. You’ve got February compared to June. The weather in February the is the wettest month here at Pebble Beach in the year, by far. And June is exceptionally dry. It’s not going to rain in June. I think we’re expecting dry, windy, blustery conditions and a firm and fast course because it’s June. In February, it’s soft, it’s wet, it’s cold. So it’s just different the way the golf course will look because of the different time of the season. But I think the other things you will see are several more inches of rough than you saw at the AT&T Pro-Am. The only other thing I would say is around the bunkers there is more fescue. If you look back at ’72, ’82, ’92, 2000, and 2010, it’s what the US Open’s always been at Pebble Beach. It’s the way it was built and it’s what it’s meant to be at this time of year.

In the previous U.S. Opens at Pebble, that two-hole stretch at 9 and 10 has typically been the most difficult on the course. Do you expect that to remain the case or are there other holes that could trip guys up?

Yes, but I would to add number 8 as well. It may be the greatest hole in the game. It’s really a second shot approach on hole where I don’t know if there’s a more dramatic approach shot in the game. It’s just amazing. And so you put holes 8, 9, and 10 together. The 11th hole is a shortish part four up the hill that plays longer, and then you throw in 12 which is a really challenging par 3 down the hill. That’s a tough stretch. That’s the meat of the golf course. You can kind of get Pebble early and you can kind of get it late, but you better play that stretch in the middle pretty good because it’s tough.

What kind of golfer does this course most favor? What’s going to be the key to playing well and winning?

I think there’ll be a premium on accuracy and driving your ball in the fairway. The whole golf course is in magnificent condition, but I think you’ve got to drive the ball in the fairway and you’re going to have to really hit quality shots onto these tiny greens in order to keep them on the greens. And you’re going to have to keep the ball below the hole. There are some severe putting greens here where you just have to be below the hole or it’s going to be hard to score. You gotta hit crisp quality iron shots onto these marvelous little greens. But if it gets windy, then all bets are off. That’s probably the biggest hazard that we’re going to watch very closely.