Tour Confidential: Who are the weakest links on both Ryder Cup teams?

Check in every Sunday night for the unfiltered opinions of our writers and editors as they discuss the hottest topics in the sport, and join the conversation by tweeting us @golf_com.

1. Pairing suitable games and personalities is a key job for Ryder Cup captains (our Jeff Ritter took a stab at this task earlier this week), but so is knowing which players to bench. With just two weeks until the matches commence, who are each team’s weakest links? And how do you see that affecting strategy?

Sean Zak, associate editor (@sean_zak): Weakest American…might be Jordan Spieth? The correct answer is probably Phil Mickelson, but Spieth has struggled this year, as we all know. His one top-10 finish since Augusta came at Carnoustie, where his putting woes were neutralized with easier greens. If I’m looking for someone who should probably sit a match or two, it’s him. As for the Euros, it’s probably Thorbjorn Olesen. He played his way onto the team, but he’s never played under Ryder Cup pressure. I’d expect him to sit out the alternate-shot format (at least on Day 1).

Alan Shipnuck, senior writer (@AlanShipnuck): I agree with everything Sean said but the funny thing is if Jordan holes a few putts early in his first match and gets his confidence flowing he could turn out to be a dominant force. Given his age I imagine Phil is slated to play only three matches anyway. Europe has six Ryder rookies so it’s tough to single out Thunder Bear. I think Garcia is the key guy for Euro strategy — they want to give him a chance to be the Sergio of old but if his season-long slump continues they can’t go to him too often. So much hangs on how his first match goes.

Jeff Ritter, digital development editor (@Jeff_Ritter): I included this in the column, but as much as I love the intangibles Phil brings to the team — and I expect him to play well — I think he might be better off on the bench for alternate shot given his poor driving this year. I also think pairing him with Tiger, even for just one session, would be a mistake because of the distraction it would create. As for Europe, there are a few unknowns among the rookies, but I’d side with Zak and tap Olesen as a potential weak link. And that’s part of the reason I’d pair him with Rory — let him get settled in and maybe grab a quick point.

Josh Sens, contributing writer (@Josh_Sens): Tiger and Phil both have losing career records in the Ryder Cup. Are we allowed to call them weak links? They won’t be treated that way by Furyk but from a strategy standpoint, I don’t think we will be seeing either playing two matches a day. Otherwise, as has been said countless times before, the pressure of the Cup is like none other. Some thrive in it. Others wilt. That’s part of the fun — seeing who is a fit for it. No way to predict how rookies will respond but you’ve got to assume both coaches will figure out ways to ease them in. Maybe a Finau/Phil pairing. Along with a Bryson/Tiger tandem. The same rookie/veteran formula will likely apply for the Europeans too.

2. The U.S. side looks superior on paper, but Captain America (Patrick Reed) said the Americans should, in fact, be the underdogs in Paris. Are you buying any part of that?

Zak: His quote was taken the wrong way. He says the Americans are ready to feel like underdogs, whether they truly are or not. There’s a difference…and I think it’s a good mentality! There are plenty of Americans who need to prove they can peg it soundly in this format across the pond. They are, however, not the worse team.

Shipnuck: The U.S. is definitely the stronger team but given the quirkiness of the venue and a quarter century of futility on European soil I think it’s even money.

Ritter: The U.S. is the favorite but you have to think like an underdog when it’s a road game. Given that the Americans haven’t won in Europe since ‘93, there’s a lot of bad juju to overcome. It won’t be easy.

Sens: I’m buying it because it makes sense to get into that mindset. I’m also buying it because the Europeans are no slouches and playing on home turf. I don’t think they should be as big an underdog as Vegas has made them.

3. NBC was awarded broadcasting rights to the Augusta National Women’s Amateur, which debuts next year. Is the NBC crew likely to call the event with the same hushed reverence that Jim Nantz and Co. employ at the Masters?

Zak: I hope not, but I’m sure that Uncle Fred and the Masters execs will get the mood they want. It would be really great if NBC could play up how special, unlikely, and rare this event will be. Does Martha Burk’s name make the broadcast? Probably not, but it should.

Shipnuck: That’s as likely as someone trotting out McCord’s old bikini wax line! Given the youth and wide-eyed wonderment of the competitors in the Women’s Amateur I expect there will be more energy and fun in this telecast. (There can’t be any less!) I love that CBS now has some competition — hopefully it will spur some much-needed upgrades to the telecast (like ShotTracer).

Ritter: Exactly — given that it’s the first time at Augusta for the competitors and the network, expect a light and fun version of the usual high-caliber NBC broadcast.

Sens: Nobody does hushed reverence like Jim Nantz. But NBC is sure to be suitably worshipful. Anyone who isn’t is not allowed back. 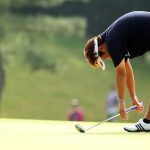 You may also like Hang in there: Here are 11 reasons why you aren’t getting any better at golf (but should still have hope)

4. Tiger Woods is one of the 30 players in the field for the Tour Championship, an event few thought he would qualify for at this time last year. What’s the single most impressive feat — a finish, a stat, a shot — you saw from Woods this year?

Zak: The control he played with on the front nine at Carnoustie. It was flawless, as Alan Shipnuck broke down. While everyone around him quivered, Woods took momentary control of the tournament. Ultimately, he quivered, too, but for about two hours the man in red had us all believing.

Shipnuck: ‘ppreciate you, Zak, but I go back to Tiger’s first round of the year, at Torrey, on the 16th hole when he hit an impossibly high six-iron that nearly went in for an ace, leaving his playing partners Patrick Reed and Charley Hoffman slack-jawed with disbelief. It was vintage Tiger and that one swing told us we were in for a helluva ride.

Ritter: The final round at the PGA. From the moment Woods stepped out of his courtesy car with the shades down and hat flipped, it was game on. And then he went out and shot the best final-round major score of his life. Koepka never cracked and it goes in the books as a runner-up…but that was one hell of a silver medal.

Sens: Top 10 in two majors. And leading one of them on the back nine on Sunday. That’s just silly for a guy coming off his fourth back surgery and a bout of the chip yips, among other setbacks.

5. Tadd Fujikawa, 27, became the first male professional golfer to come out as gay, doing so in an Instagram post last week. What kind of influence do you see Fujikawa’s announcement having on the golf world?

Shipnuck: Of course there will always be social media trolls but pretty much the entire golf firmament offered words of support to Tadd and that was significant, given golf’s woeful history. Between all of the various professional tours there are more than a thousand male touring pros — it is a statistical certainty there are other gay players out there. Whether or not they come out, Tadd’s courage has to be deeply inspirational to all of them.

Sens: I’m sure he will be an inspiration and a source of comfort for others struggling with the kind of questions of self acceptance and public acceptance that Fujikawa described. As for the very conservative golf establishment as a whole, I’m not expecting mini rainbow flags on many players’ lapels anytime soon.

Ritter: Bamberger nailed it earlier this week when he wrote, and I’m paraphrasing, that Tadd paves the way for the next PGA golfer facing a similar choice. I imagine it might still be scary in such a conservative sport, but thanks to Tadd kicking down the door, it might be slightly less daunting for the next golfer to pass through it.

6. Our anonymous player poll, which digs into cheating on Tour, slow play, Tiger, Trump and more, hit the web last week (and is in the October issue of GOLF). What was the most interesting or revealing nugget from it?

Zak: That the majority of players surveyed expect Justin Thomas to win more majors moving forward than Jordan Spieth. I think the timing of the survey has many operating under recency bias. I’d have a hard time picking one over the other, but I’d have the hardest time picking against the kid with three majors already.

Shipnuck: That 100% of respondents rated their pace of play as acceptable. That was laugh-out-loud funny. This is why slow play is such a pernicious problem: players have a very tough time being honest with themselves.

Sens: That some of them voted for Trump. I’m kidding. The healthy percentage (44%) of players who said they’ve seen cheating in tournaments, contrasted with the minute percentage (make that zero) who said they had ever cheated themselves. Something doesn’t add up.

Ritter: More than half of the pros believe fans have cost them shots. So, it’s not just a “Tiger group” thing (unless half of all pros surveyed have played in high-wattage groups with Woods). Wonder how that fan cell phone policy is working out for the Tour.