Tour Confidential: How much does Phil have left in the tank?

1. Phil Mickelson ended his winless slump at the WGC-Mexico Championship on Sunday, his first victory since the 2013 British Open at Muirfield. It was Tour title No. 43 for Phil. What’s your biggest takeaway from Mickelson’s play in Mexico, and how many wins will he end his career with?

Michael Bamberger, senior writer, Sports Illustrated: A big-muscle swing can last and last and last, and an abiding love of the game is so important, too. Billy Casper had the former. Arnold Palmer had the latter. Phil could win at least 44.

Josh Sens, contributing writer, GOLF Magazine (@JoshSens): I think we already knew that Phil still had the length and touch to win again. What we saw was that his talk about wanting to show the young’uns a thing or two was not just talk. He’s fully into it. It’s a matter of him putting well and avoiding those occasional big numbers that have long been his bugaboo. As for his career win total, Phil is about as young a 47-year-old as we’ve seen in golf. No reason he couldn’t win another small handful of events. Dare I say … 47?

Joe Passov, senior editor, GOLF Magazine (@joepassov): Why limit Phil at all? He’s gone T2, T5, T6 and a giant W in his last four events. With the possible exception of Justin Thomas, he’s been the best player in the world in 2018. Let’s give him one more win this year (the U.S. Open) and another three beyond — one after he turns 50, just to show us all he could do it. That’s 47.

Dylan Dethier, associate editor, GOLF.com (@dylan_dethier): Is Phil playing the best golf of his entire life? What struck me the most about Phil’s play was his putting inside 10 feet — aren’t pros supposed to build up scar tissue over time and lose their nerve over short putts? Phil was ramming ’em by the hole and pouring ’em in coming back.

2. Who has the better finish at the Masters: Phil or Tiger?

Sens: Phil has to be the favorite at this point but man, it’s gonna be a fun week.

Passov: Tiger has the better finish at the Masters — he wins it. Phil rallies to capture the U.S. Open.

Dethier: The fact that we’re asking this question — and that the answer could be relevant to the outcome at Augusta — is exciting as hell. But Tiger finishes higher at the Masters. 3. Michelle Wie birdied the 72nd hole to win the Women’s World Championship in Singapore, her first victory since the 2014 U.S. Open at Pinehurst. Could you see Wie one day returning to the top of the game, or are wins likely to come sporadically through the rest of her career?

Bamberger: Past performance would of course suggest sporadic wins. You can win sporadically and wind up in the Hall of Fame.

Sens: So much depends on her staying healthy. From an injury standpoint, she’s been the Tiger Woods of women’s golf. So many physical woes to fight through. I don’t see her vaulting to No. 1. There’s just too much young talent out there. But more wins? Sure.

Passov: So great to see this happen for Michelle Wie and for golf. I sure wish it would happen once in a while within the lower 48, and during normal viewing hours, but it’s fantastic for the LPGA to see her hoisting a trophy, wherever the event took place. She’s definitely played much better and more consistent in the past 12 months. You know she’s motivated and, in a way, well-rested, after all the time away from tournament golf due to multiple aches and pains. It’s unlikely she’ll return to No. 1, but top five is easy to envision.

Dethier: It feels like the LPGA is primed for a big year, with some of its biggest stars set to contend early and often. Wie is so dynamic a player and personality that it would be great to see her in contention every week — but she has to cement her spot as a top-five American player first. 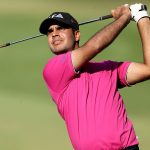 You may also like ‘Not right now’: Phil Mickelson mistakes 54-hole leader Shubhankar Sharma for media

4. Justin Thomas won the Honda Classic two Sundays ago, but the storyline that lingered into last week was his ejection of a fan who was rooting against him and playing partner Luke List. (A week earlier at the Genesis Open Thomas said galleries were “getting out of hand.”) “I felt it was inappropriate, so he had to go home,” Thomas said after the Honda. Thomas took to Twitter the next day to apologize and say he overreacted. Do you have a problem with how Thomas handled the situation, and should players hold this sort of power to eject fans for whatever reason they see fit?

Bamberger: Fans who put themselves above the competition should be shown the door. Thomas’s phrase, “so he had to go home,” was sanctimonious but I don’t think he had anything to apologize for. If you come to a golf tournament, behave within the norms of the sport.

Sens: Thomas made a mistake. He showed bad form in the heat of the moment. To his credit he recognized quickly that he had goofed and apologized. Apology accepted. As to the second half of the question: a resounding no. Players should absolutely not have that power. That belongs to those running the event. Period.

Passov: I actually liked JT calling out this guy, but I also liked his swift apology. We live in a time that propriety is lacking in all walks of life, and golf tournaments, sadly, are no exception. If being called out by a superstar will help chill such idiotic behavior, I’m in favor, but yes, it’s up to the tournament to act in tossing someone — not a player.

Dethier: It’s not that the fan was in the right — obviously not — but JT’s reaction was off-putting to a lot of fans. Why should he care what some jackass in the crowd is yelling? It feels beneath him. And when everyone on the internet gets collectively just a little bit annoyed, their little reactions add up to produce a silly controversy. Yeah, players should be able to kick anybody out. But doing so is never going to be good PR.

5. The USGA announced that its 18-hole playoff is no more. Beginning this year the U.S. Open, U.S. Women’s Open, Senior Open and Senior Women’s Open will institute a two-hole aggregate playoff (with sudden death to follow if needed). Do you like the change?

Bamberger: No. I miss the old, mean USGA. Two holes I don’t get. Three I could sort of get. One is wild and not USGAish. Two? I like 18.

Passov: I’m as traditional as the next guy, Michael, but how “old and mean” does the USGA need to be? Go back to the 36-hole final days, ending on a Saturday? Going back to 36-hole playoffs? Things evolve, and we have to evolve with them, even grudgingly. Those Monday 18-hole playoffs were horribly anti-climatic, and a pain for all involved. Bravo, USGA!

Sens: Well, it’s certainly in keeping with the effort to modernize the game. I don’t love what it says about the way the time-money equation increasingly rules our lives. But I get it. Seventy-four holes is more than a large enough sample to settle on the winner of a tournament.

Dethier: The things that are quirky and nonsensical about sports are the things that make it special to be a fan through the years, and they’re worth protecting. But now that every event on Tour goes to a playoff, it’s understandable that the USGA is nervous about Monday finishes.

Bamberger: One hole is appropriate for the Masters because it’s a TV show and a spring flower with a short shelf-life. Three holes and four holes work well for those events. There was NOTHING fun about the Monday finish for the U.S. Open, but it was in keeping with the grinding nature of the world’s most grindiest championship. It was like the U.S. Open knew what it was. I guess I like the British Open at four best and the U.S. Open at one least.

Sens: Sudden death is just that. Too sudden. Four verges on overkill. Three feels about right.

Passov: I’m with Josh, here. If you’re going to do two, why not three? What I worry about is that with only two holes, both might bend in the same direction, or perhaps both holes would have a hole cut on a portion of the green that favors one player over another. You have a much better chance of mitigating that aspect over three holes.

Dethier: Two holes means the new tweak completes the small straight of playoff formats, which is incredible. But sudden death is the purest and only logical format.