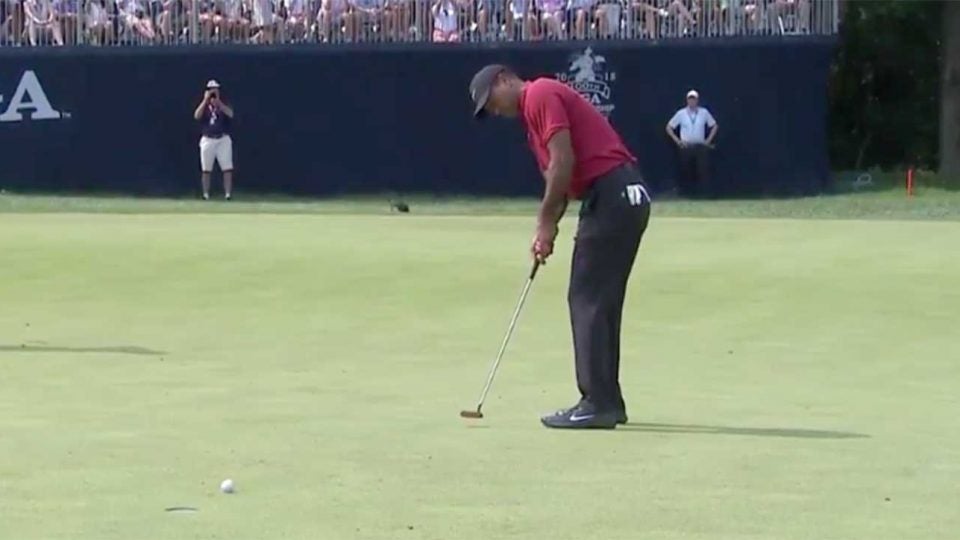 Tiger Woods made a birdie at the 9th, his second straight.
@PGA

ST. LOUIS — Tiger Woods surged up the leaderboard on the final day of the 100th PGA Championship, but his quest for major No. 15 ultimately fell short.

Woods shot a front-nine 32 on Sunday at Bellerive to get within one of the lead, but his climb slowed on the back nine as Brooks Koepka pulled away. Woods finished with a six-under 64, his lowest round ever in a final round of a major. He finished 14 under for the week, good enough for second place behind Koepka (16 under), who won his second major of the season and third of his career.

The 14-time major champ, who started the day four shots off the lead, didn’t hit a fairway on the front nine yet still made four birdies. He birdied the 2nd and 3rd holes to jump up the leaderboard before he fell back with a bogey on the par-3 6th.

Woods bounced back with a birdie on the par-5 8th and then made another on the 9th (after he took a free drop after a drive on the cart path), using a fist-pump as the exclamation point.

He made the turn in 32, but shortly after Woods made the turn, Koepka birdied the 8th and 9th to get to 14 under and increase his lead. Woods started the back nine with a two-putt par on 10, and on 11 he came one rotation short on another birdie. From 28 feet he left his birdie try an inch short, settling for a disappointing par.

But Woods made his first back-nine birdie a hole later, when he he stuffed an approach from 140 yards to five feet. After a short delay for the grounds crew to repair the hole after playing partner Gary Woodland’s approach hit the cup, Woods rolled in his putt. On the next hole, the par-3 13th, he drained a 10-footer for birdie and raised his putter to celebrate, as he crept to just one stroke back.

But the problems that hurt Woods on the front returned on 14. A missed fairway led to a missed green and lip-out for par from 14 feet. That bogey dropped him to 12 under, but it didn’t last. He found the fairway at 15 and then stripped an iron to a foot for a tap-in birdie, which moved him to 13 under and one behind co-leaders Koepka and Scott.

Woods two-putted for par from 21 feet on 16, and on the par-5 17th his tee shot found the hazard right of the fairway. He ball was embedded and he played out, but he was only able to advance it 59 yards. From 221 he found the bunker and got up and down for par. Yet his par on 17, one of the few holes where eagle is in play, did little to help his chances. Behind him Koepka made birdies on 15 and 16 to get to 16 under.

Woods found the fairway on 18 rolled in a 19-footer to end his day with a birdie.