AUGUSTA, Ga. — Tiger Woods is roaring at the Masters.

Woods shot a tidy two-under 70 in his opening round at Augusta National Golf Club on Thursday and was tied for second when he finished on the 18th green at 4:26 p.m. local time.

Justin Harding (69), Adam Scott (69) and Jon Rahm (69) are currently tied for the first-round clubhouse lead, just one ahead of Woods and a handful of others.

“I felt like I played well and I did all the things I needed to do today to post a good number,” Woods said. “I drove it well, hit some good iron shots, speed was good on the greens.”

Woods, who entered the week with 14/1 odds to win and is in search of his first major title since 2008, said during his Tuesday press conference that he feels like he can win. Jack Nicklaus agreed; he said earlier in the week that he’s never seen Woods so confident.

Teeing off at 11:04 a.m. alongside Rahm and Haotong Li, Woods striped his ball down the 1st fairway to a raucous applause. He got up and down from a greenside bunker at the par-5 2nd to jump into red figures. But he gave that shot back three holes later on the redesigned 5th. 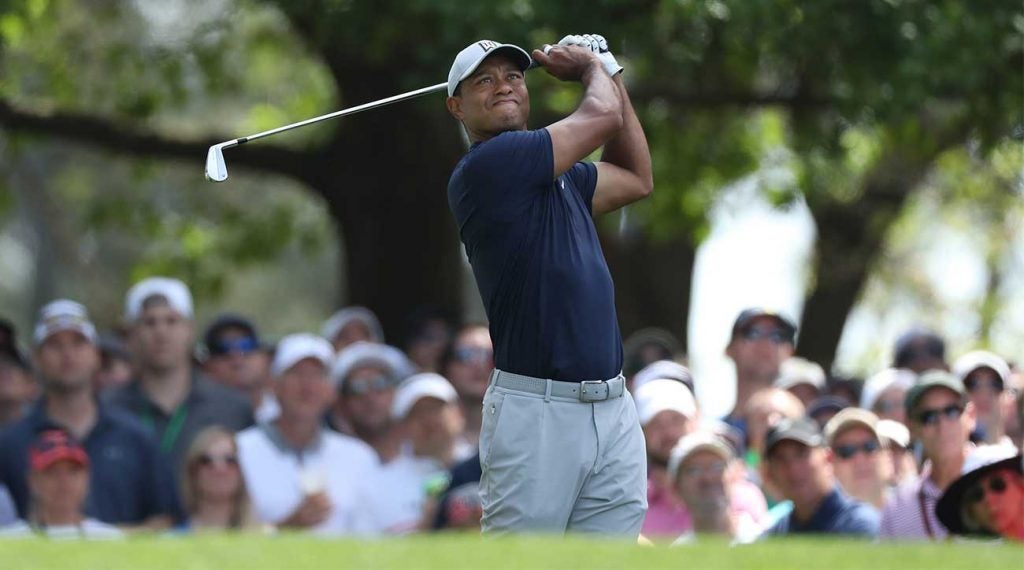 Tiger Woods watches a shot during the opening round of the Masters on Thursday at Augusta National Golf Club.
Getty Images

The par-4 5th was lengthened 40 yards and saw its fairway bunkers repositioned and green slightly enlarged since last year, and it had been one of the more difficult holes of the morning by the time Woods reached it. On Tuesday he called the new fairway bunkers “unplayable to get the ball to the green,” and that’s where he drove it on Thursday. His comments proved prescient; he was only able to advance his second 125 yards. From 78 yards he wedged it to five feet, but his par putt missed and he fell back to even par.

On his next swing, on the par-3 6th, Woods stuffed it to four feet but couldn’t get the short birdie putt to drop.

He let another birdie slip away on the par-5 8th, when he flared his second shot from 253 yards out to the right and was left with a tricky chip. He pitched on to 11 feet but couldn’t roll in the putt and settled for a par.

“I felt in position to make birdies today and I missed a couple on the front nine, a couple short ones, but overall I felt my speed was really good all day,” Woods said.

Tournaments
Masters 2019: Jason Day injures back picking up daughter before Round 1

Woods drained a five-foot birdie putt on 9 to make the turn in one under, two off the lead. After three straight pars to start the back, Woods cut the lead to one with a two-putt birdie on the par-5 13th. He got in trouble with his tee shot on 14 but turned what appeared to be a dire situation into a share of the Masters lead.

After hitting into the trees left of the fairway, Woods found a gap into the bunkerless 14th green and stuck his approach to 25 feet, drained the putt and grabbed a share of the tournament lead.

.@TigerWoods escapes from the trees on No. 14 and converts his 25-foot birdie putt to claim a share of the lead. pic.twitter.com/ub6VGCYxNI

Woods put himself in good position again to attack the par-5 15th, but his second shot airmailed the green and he two-chipped and one-putted for a par. He was still tied for the lead when he got to the 17th, but he went right off the tee, missed the green and couldn’t make his nine-foot par save. Woods found the fairway bunker on the par-4 18th but blasted out to pin high on the fringe and made par.

Woods’s second round begins at 1:49 p.m. on Friday. He’ll be in the second-to-last group to tee off.