There is no one less likely to watch cat videos than your correspondent, but the old Letterman bit, the Stupid Pet Trick, was a direct blow to this reporter’s funny bone. Andy Sullivan, a spirited European Tour player, turns golf into a numbingly interesting Stupid Human Trick by trying to make an ace on an empty par-3. For those who haven’t seen it, this has it all, a beginning, a middle and an end, with character development.

Yes, of course: there’s only been one, Henni Zuël of GolfTV, in a 28-minute sit-down with the man. It could have been an icky exercise in corporate synergy, as Tiger has a deal with GolfTV and its corporate parent, Discovery, Inc. These arrangements are a challenge, to say the least, to traditional reporting. Nevertheless, this interview has a special quality to it. Ms. Zuël is a former touring pro with a keen sense of the game. She has a lovely accent. She’s not there to ask “tough” questions – no gum questions! — but to help viewers understand the impact the win had on Woods. Her questions are short and as Tiger answers she’s really listening. One of the most important things a reporter or interviewer can do is make the subject comfortable. Henni does this effortlessly.

Tiger reflects on No. 15 pic.twitter.com/TDxBxISe3H

The Tiger-Henni interview brings to mind the best, and about the only, sit-down TV interview with Ben Hogan. It comes to mind for a couple of reasons. First of all, Woods had a neat reference to Hogan, at the Masters, where he won the GWAA’s Hogan Award, for overcoming various life obstacles last year. Woods described driving down Magnolia Lane, toward the clubhouse, and thinking of the old driving range, on his left, and how it could once contain the likes of Hogan. Hogan’s precision is remarkable and his insights are more so. (“I feel sorry for rich kids.”) I asked Venturi once what made the interview so good and he said, “Short questions, long answers.” Well, there was a comfort level there, too.

I’m reading a short novel, translated from German, called The Club, written by a German reporter named Takis Würger. Well-reviewed, but I find it annoying, though I imagine the movie version will be good. The club in question is an elite secret society at Cambridge. The golf reference is a reminder of how many people view the game, and I found that annoying, too: “He was blond and looks as if he was probably good at golf.”

The lodge brothers are at Quail Hollow this week. I first went there in 1979, to caddie in the Kemper Open for a gent named Randy Erskine. He was blond and good at golf. Forty years—it doesn’t seem it. I’ve been back to Charlotte and the golf course maybe eight or 10 times since then. Then the airport was the size of a 7-Eleven, and I stayed my first night at a motel that in my mind was across the street from it, walking there with a suitcase. There is no across the street anymore. The golf course then was bigger, longer and harder than any course I had ever seen, but now every course on Tour looks big and long and hard, until you start driving it 330 and in play. I stayed a couple nights with a family that lived near the course and then Randy invited me to use the second bed in his room at a Holiday Inn. There are still a bunch of Holiday Inns in greater Charlotte but it’s hard to imagine a Tour player staying in one, let alone with his caddie. Arnold was in the field. He was a god in Charlotte, where he had a Cadillac dealership. Randy played behind him in a 36-hole U.S. Open qualifier on the Monday after the tournament. Randy paid me $100 for that day, even though he missed qualifying. An absolute fortune ($350 today). I was ready to run away and join the circus. Still at it. Golf, professional and otherwise, has more mysteries to be solved than one can get to in a single lifetime. Randy became a celebrated Michigan club pro. In ’79, he put his watch and wedding ring and wallet in a velvet Crown Royal bag while playing, as best I can recall. If there’s a player in the field this year using a Scotch bag in a similar manner, I’d like to know about it. 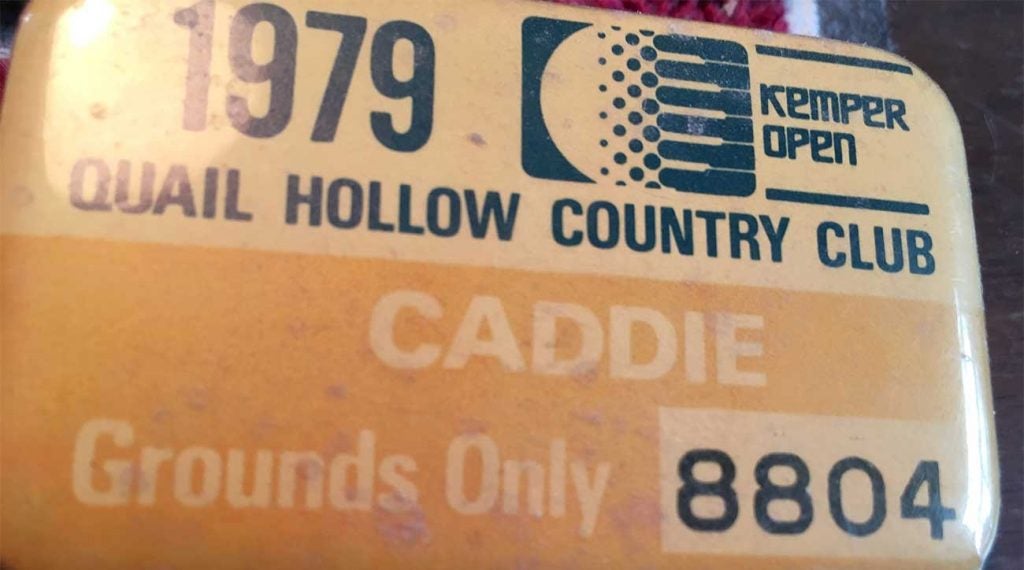 And we quote: “Standard Golf announces its new flagstick conforms to the Rules of Golf.”