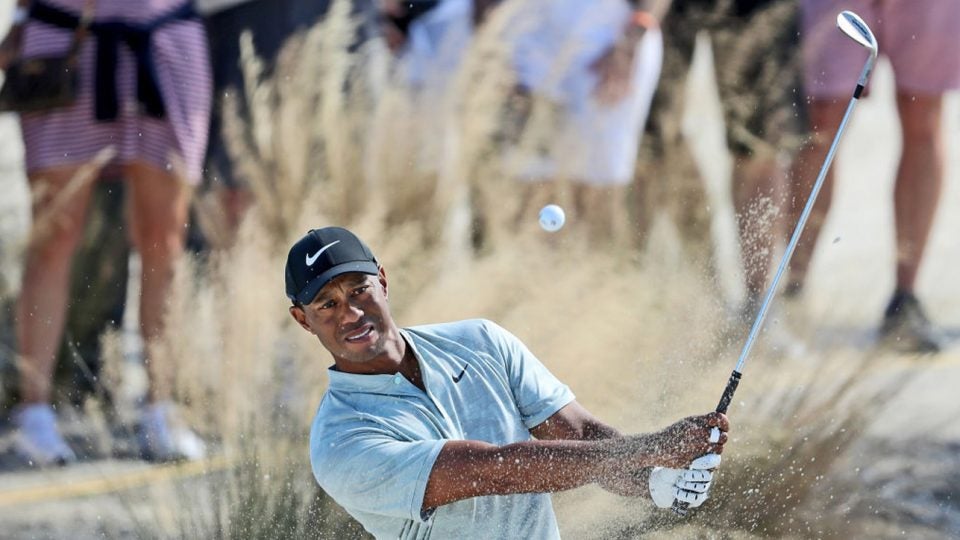 It wasn't a good first round for Tiger in the Bahamas on Thursday.
Getty Images

A triple bogey on the 12th hole highlighted a poor first round on Thursday for Tiger Woods at the Hero World Challenge, where he finished at one-over 73 and tied for 15th in the 18-man field.

While Tiger’s tee shots were far better on Thursday than during his showdown with Phil Mickelson last week at Shadow Creek, his putting struggles continued to beleaguer him in the Bahamas. Through the first five holes, Woods made a pair of bogeys.

But back-to-back birdies on the par-5 6th tee and par-4 7th hole got Tiger back to even par, and that was his score when he made the turn.

After opening the back nine with two pars, Woods’s day went up in flames at the par-3 12th hole. Ultimately, it was his chipping that cost him.

Tiger’s tee shot landed on the edge of a water hazard. His chip shot then failed to scale a hill and onto the green, and instead it rolled down past Tiger and into the water. After taking a penalty stroke, Tiger’s second chip shot landed on the green. He then missed his putt for double bogey and had to settle for a scorecard-wrecking triple, putting him at three over through 12 holes.

Tiger was able to recover with birdies at 15 and 18 to close out the day at one over, and he avoided last place in his own event.

Check out the full play-by-play of Tiger’s round below:

(ALL TIMES ET / REFRESH THIS PAGE FOR THE LATEST UPDATES)

Full Round 1 Scores / Get to know host course Albany

3:50: Woods knocks in the putt. That’s a 73 for the day. He’s +1 for the tournament, one shot out of last place. Not the round he wanted, and it all goes back to his struggles on the 12th hole. But still there are worse ways to have an off week than the Bahamas, right? That’s it for the blog today. Thanks for reading and catch you again tomorrow.

3:45: Woods now from the fairway, taking aim at the green that’s framed by the grandstands. ..And he drops the shot of the day! It sticks about 2 feet left of the hole. That’s the kind of iron shot he flashed often late in the summer.

3:32: Woods now on the par-3 17th… And he came a little out of that swing, and the ball comes up a little short and right of the stick. It’s on the fringe. He’s not happy with it.

3:14: Incidentally, Woods has sunk back to 18th place (DFL) as Hideki Matsuyama closed his round with back-to-back birdies to finish 2 over.

3:12: On 15, Woods shoves his approach shot into the right waste area. Another challenging up and down awaits.

3:06: Meanwhile, birdies are flying all over the place. Alex Noren goes birdie-birdie-birdie-EAGLE to get to 5 under and join the leaders.

3:03: A colleague here at GOLF.com HQ says Tiger’s new, oversized shades look like “the full Paul Casey.” I don’t think it was a compliment. Regardless, the sunglasses don’t seem to be doing TW any favors today.

3:02: …and Tiger’s putt burns the edge but stays out. He knocks in the comebacker and remains 3 over. Disappointing not to get one back there.

3:00: Woods from the sand hits a deft little shot to about 5 feet. Great recovery. He’ll have that for a birdie.

2:56: Woods on the tee at 14 — driver. And heflashes an ugly-looking, whirly-bird follow-through as the ball sails way left, into a sandy waste area. The grind continues.

2:53: So it’s Watson and Cantlay now with the lead at 5 under. Patrick Reed is one back. Tiger still struggling fo the day and the event — he’s one shot out of last place at +3.

2:44 p.m.: Woods from the fairway on 13th…and it comes up short of the green. He’ll have to get up and down to stop the bleeding.

2:38 p.m. Tiger misses his putt for double bogey and has to settle for triple bogey. A disastrous 12th hole for Woods. He’s now 3 over through 12 holes.

2:36 p.m. Tiger has to take a couple drops before his next chip shot. On the edge of the hazard, Tiger’s chip shot lands on the green. He now has a chance for double bogey.

2:33 p.m. Tiger’s chip shot is a disaster, as it fails to get over the hill and onto the green. Instead, it rolls back and into the water.

2:26 p.m. Tiger’s putting struggles continue as he misfires on a putt for birdie. Missed a great chance to go under par. Nevertheless, a fourth straight par keeps him at even par after 11.

2:23 p.m. Tiger’s chip shot rolls just past the cup and almost nails an eagle here on 11. He’s set up for a solid birdie putt here to move under par for the first time today.

2:18 p.m. Tiger goes for glory on his second shot, only to have his shot roll right off the green and into the rough. He’ll need a good chip shot here in order to birdie.

2:12 p.m. Tiger continues to drive the ball well here today. He’s on the fairway once again after his tee shot on 11.

2:08 p.m. Tiger’s birdie putt falls short of the hole. Appears like he will have another two putt for par here.

2:04 p.m. Tiger’s second shot lands in the green, but it’s going to be another long birdie putt here.

1:55 p.m. Tiger’s birdie doesn’t break at all like he expected to as it rolls to a few feet away from the hole. Tiger two putts for another par. He remains at even par as we make the turn to the back nine.

1:51 p.m.: Tiger’s third shot gets him on the green at the 9th hole, and he’ll have a chance to birdie here. But it won’t be easy. Sure looks more likely that another par is coming here.

1:50 p.m. Instead of going for the green, Tiger lays up on his second shot.

1:42 p.m. The last hole before the turn is a Par 5. Another strong tee shot for Tiger to set himself up well at the 9th hole.

1:40 p.m. Tiger’s birdie putt breaks too far to the right of the hole, yet it had the distance and power. But he two putts his way to another par and remains even after 8 holes.

1:35 p.m. At the Par 3 8th hole, Tiger puts his first shot on the green. A third straight birdie could be possible here.

1:31 p.m. Tiger’s chip shot comes up just short of the hole, but he putts his way to a second consecutive birdie. Tiger is back to even par through 7 holes.

1:29 p.m. Tiger continues his strong performance off the tee with a drive that falls just short of the green at the 7th hole. It’s a Par 4, and if he can putt well here, it could be another birdie for him.

1:27 p.m. Tiger entered today’s first round amid rumors that he has not been feeling well since his showdown with Phil last week. Rumors of a cold and fever potentially forcing him to withdraw had been swirling, but he’s here playing. Maybe the speculated illness is having an impact on his slow start today.

1:24 p.m. However, Tiger’s driving has been much better today than last week at The Match. He’s been consistently reaching the fairway with his tee shots so far.

1:20 p.m. Tiger’s putting woes that we saw last week at Shadow Creek have reappeared so far in the Bahamas. Let’s see if that birdie on 6 can give him some momentum before the turn.

1:18 p.m. Birdie there for Tiger. He’s now back to one over after six. Good bounce back.

1:16 p.m. And a good wedge it is. Shorty coming for birdie. Inside five feet.

12:57 p.m. He finds the green, but it’s gonna be another long-range birdie putt.

12:47: Green in regulation at the par-4 4th. Longish birdie putt coming though.

12:34 p.m. Tiger’s second shot finds the bunker. Needs to get up and down for birdie.

12:25 p.m.: Tiger misses his par try and taps in for bogey. One over after two holes. Not the best start for Mr. Woods. Low scores will win at Albany (obviously), but it can be a birdie fest out there.

12:05 p.m.: OK, here comes Tiger’s tee time. Last year this start was the talk of the golf world. Less hype this year, obviously, but it’s still his first start since his victory in the Tour Championship.

Pre-round: Woods tees off alongside Justin Thomas for the first round at 12:05 p.m. ET.