Tiger Woods’ former caddie Steve Williams never watches golf anymore. But on Monday morning, he flipped on the TV in New Zealand to see his former boss play the final round of the Masters. He explained why in an article for Australian outlet The Players Voice.

“I don’t watch golf on TV. After more than four decades inside the ropes for the best players in the world, seeing all the action up-close, there’s no interest for me in watching the sport on TV,” he wrote. “Except for last Monday.”

Williams wrote that despite an acrimonious ending to their player-caddie relationship, he was excited to tune in to see if Woods could capture his fifth green jacket — and 15th major championship. “Watching that final round, it’s literally the first time in five years that I’ve seen him swing a golf club and I was so impressed with his balance and his whole demeanor. Everything just looked spot-on,” he wrote.

I don’t watch golf on TV...except for last Monday."

Woods, as you well know by now, got the job done. Williams was impressed with his play, but more than anything, he was taken with Woods’ post-round celebration. “That outpouring of emotion is testimony to the fact that winning his 15th major was harder than winning his first one,” he said. “But the celebration also showed a real change in Tiger. I was impressed with how open and friendly he seemed. We all mellow with age – that’s part of the process of getting older but this was a significantly different Tiger.”

Williams wrote that Woods vowed to change, to be more open and friendly with fans — but that it took a while for those changes to really kick in. But the Woods that Williams saw during the final round broadcast showed a decidedly different demeanor than the man he used to caddie for.

Williams suggested that change may have had something to do with the 2016 death of Arnold Palmer. “It was about a year after Arnold died that Tiger started his comeback after his back surgery, and I think he may have decided that with his second chance he wanted to be remembered the way Arnold was remembered,” he wrote. 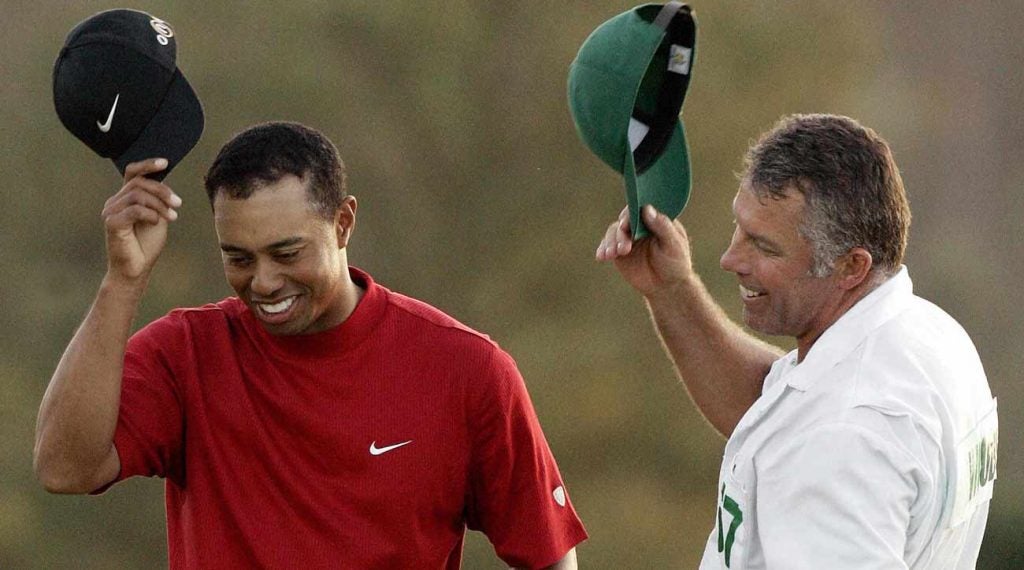 The last time Tiger Woods won the Masters was with Steve Williams on the bag in 2005.

-On Woods’ on-course sense of humor: “When he was playing badly, he would often joke, ‘If I keep playing like this, it’s going to be TW’s carwash and you’ll be the one polishing cars, Stevie.'”

-On the celebration following Woods’ iconic 2005 chip-in on No. 16: “The only negative is that Tiger and I were so pumped that we made an absolute hash of a high-five – we didn’t even connect.”

-On Woods coaching himself: “He always used to say that he wanted to “own” his swing and now he does – even though it’s a swing he’s developed to help him cope with his back.”

-On his chances of catching Nicklaus: “It would be of no surprise for Tiger to win multiple majors in 2019 and then that dream of his becomes absolutely doable.”