Tiger Woods usually doesn’t stick around for long at the end of a golf tournament. Once he holes out on 18, fulfills his media commitments and signs some autographs, Woods likes to hit the road. So it was a particularly meaningful moment when the 14-time major champion waited near the scoring area to congratulate Brooks Koepka.

Woods stood to greet Koepka and his girlfriend Jena Sims with a hug and a smile. He also offered a congratulatory handshake to Koepka’s caddie Ricky Elliott. 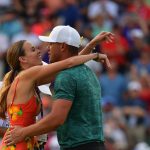 You may also like PHOTOS: Koepka celebrates PGA Championship victory

Woods and Koepka first met five years ago; coincidentally when they were paired together in the final round of the 2013 PGA Championship. They were out of contention in 2013, making this year a decidedly different story. Koepka shot a final-round 66 to hold off a fast-charging Woods by two shots. You can watch the video below.

Tiger seemed genuinely happy for Brooks after the win — stuck around to make sure he gave him congrats pic.twitter.com/LEq0ZIfdy4