The most important match of any Ryder Cup is the first on Sunday, and the pressure is immense

The former American Ryder Cup captain (lost a road game) and British Open winner was standing beside the par-3 16th tee, here at this reclaimed landfill, aka Le Golf Club National. (Four syllables.) He and his wife Melissa were watching the day’s first match, Rory McIlroy of Europe versus Justin Thomas of the United States. His red, white and blue wristband was for his country’s colors, not the blue, white and red of the French flag.

The two gents were all square. Tied, for you folks who might be new to this whole Ryder Cup/match play thing. The captains, by the way — there was a morning inquiry from a reader on this issue — select the 12 players in a blind draw. Neither knows what the other is doing. But each tries to guess.

“You’re putting out your best guy and they’re putting out their best guy,” Lehman said. “If you can take him down, it’s huge. Huge.” There is nothing Trumpian about Lehman’s Minnesota accent or pronunciation of this important word. But huge was just the right word.

The U.S. was looking to do something borderline historic on this Sunday, at least as it relates to Ryder Cup history, with the matches being held on the Continent for the first time since they were at Valderrama in Spain in 1997. Ryder Cups used to be played in odd years, but the Sept. 11 attacks put an end to that.

In 1999, at the Country Club, the U.S. was trailing by four points after two days and the U.S. captain, Ben Crenshaw, sent out the very same Tom Lehman in the first match. Lehman was 40 then. He’s 59 now. Mark James, the European captain, had Lee Westwood in the leadoff position. Lehman waxed the Englishman, 3 & 2, and the Americans were off and running. The U.S. had an epic Sunday and won by a point.

In 2012, at Medinah, the Americans had a four-point lead on the Europeans through two days. Darren Clarke, the European captain, put out Luke Donald first on Sunday. Davis Love put out Bubba Watson. Donald won, 2 & 1, and Europe went on to have its own epic Sunday, and won by a point.

The Lehmans watched intently as both Thomas, who had the honor, and McIlroy, played short irons into the 16th green. What swings they both have, with high marks both for style and substance. “Two incredible talents,” Lehman said. “Aggressive swings, sound fundamentals, great mental strength.” There is so much pomp and circumstance and hype around every Ryder Cup match, and it’s getting worse all the time. What a pleasure it was for the games to actually begin when they finally did, early Friday morning. And now it was Sunday afternoon. Now it was all about the golf. Golf under pressure. There’s nothing like it.

They both made pars on 16. Game on, still tied. The first point, still dangling. Big for both but the Americans, trailing by four coming in, needed it more.

On the par-4 17th, Thomas smashed his tee shot down the middle and McIlroy smashed it longer, but in the gnarly left rough. You cannot play this GCN course out of the left rough. Or the right rough, for that matter. Lehman gave due credit to the Europeans, for setting up a course that, at least in theory, suited their play, leaning in the direction of finesse, as opposed to the unabashed power game that the PGA Tour all but demands. Thomas hit his approach shot in 17 just under the hole and McIlroy, with a sawed-off finish, could not get his second shot to stop. His ball finished over the green, in heavy rough. You — you, I, anyone we know who uses the same glove for a month — could stand there all day and not get it up-and-down from there. McIlroy did. McIlory gave his pitch a little shoulder wiggle, to edge it closer to the hole. It got to four feet.

What a deeply cool thing, to see the man toiling over that four-footer. You spend a lifetime (McIlroy is all of 29) preparing yourself for that putt, and now there are 10 million eyes on your ball, plus your own two. In it went. The talent that takes. Talent, nerve, heart. Practice. Thomas missed his birdie putt and the gotta-have-it first point was still in play.

Thomas smashed a driver on 18, right on the fairway. It was so long it did a bashful flirt with a pond but never really threatened it. McIlroy, watching intently, saw what was possible, had a brief back-and-forth with his caddie, and pushed a 3-wood into a right trap. 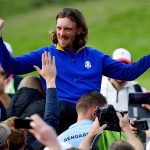 You may also like Your 30-second guide to the final day of the Ryder Cup: Scores, heroes, and disappointments

Lee Westwood was watching. The same Lee Westwood that Tom Lehman defeated. Padraig Harrington was, too. He was on that ’99 team. It’s amazing, in this game, the capacity some people have to keep a place in it.

It took McIlroy two swings to get his ball out of that fairway bunker and the second one finished in the water. Thomas hit his second on the green and the first point, that gotta-have-it first point for the U.S., was in the books and on the board. They shook hands in the fairway. There was a nice spirit between the two of them. None of the hysterics that marked McIlroy’s Sunday match against Patrick Reed two years ago in Hazeltine. Proper golf, some would say.

His instructions from his superiors, in this leadoff position, were clear: “Get a point.”

An interested observer was watching this scene unfold from behind the 18th green. Ben Crenshaw reached into his pocket for a pack of American cigarettes, lit one up and wondered how the rest of the day would unfold.