The Hard Road: Tony Finau’s journey to the edge of Tour stardom

[This story appears in the May issue of GOLF magazine.]

Tony Finau is all about distance. As of this writing, he leads the PGA Tour in driving distance at 323.7 yards a pop—a record if he can maintain it for a full season. But more remarkable than his towering drives is the distance Finau has traveled to the edge of Tour stardom.

He is of Tongan and Samoan descent; both of his parents grew up in the South Pacific islands. Finau, 28, was raised in a scrappy part of Salt Lake City. During the long winter he worked on his swing in the family garage, hitting into a mattress his father hung from the ceiling. “I learned how to strike a ball,” he says. “The piece of carpet we were hitting off was very, very thin, and underneath the carpet was cement. So I couldn’t get too steep. I couldn’t hit it thin. Most of the time we were hitting in really cold weather— we didn’t have a heater in our garage. So those are all vivid memories. We didn’t have the funds to fly to Florida and pay a PGA professional to take us under their wing and things like that. It was a humbling experience that I look back on, but I’m grateful because it’s made me who I am.” 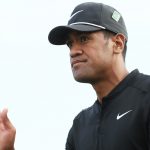 You may also like ‘Nothing short of a miracle’: Tony Finau shoots first-round 68 in improbable and emotional fashion

His game was also forged in the cauldron of Las Vegas money games. In his high school years, whenever Finau needed folding money, he and his brother Gipper would drive to Sin City to hunt for pigeons. He remembers being down $800 late in a skins game when the action arrived at a par 3. Since Tony had only $20 in his pocket, this was a problem. He proceeded to jar his tee shot, to turn the tide in the match, and a few holes later walked off the course up $600. “You learn about yourself in those situations,” he says.

A lanky 6’4″, with the biggest hands this side of Arnold Palmer, Finau was a standout basketball player who attracted attention from college recruiters. But golf was always his first love. He committed to play for BYU, but in the summer after graduating high school he abruptly turned pro, lured by the siren song of easy money. Las Vegas was the site of an organized hustle called The Ultimate Game, in which 40 guys each kicked in $50,000, with the winner taking the whole pot. One of Finau’s gambling buddies offered to sponsor him, so away he went. Lee Trevino was on hand as part of the festivities and was standing on the tee box when Finau drove the 420-yard first hole. It was downhill and at elevation, but still. “He just kind of looked at me,” says Finau, “and was like, “You gotta be kiddin’ me.” ” Finau didn’t win the $2 million, but Trevino helped him land a sponsorship deal with Callaway and remains a mentor. Over the next four years, Finau knocked around various mini-tours and had a starring role on The Big Break, becoming a folk hero with his prodigious drives. But in 2011 his mother, Ravena, was killed in a car accident that also injured two siblings. The next day, in the very same Salt Lake City hospital where they were recuperating, Finau’s girlfriend Alayna (now his wife) gave birth to their son, Jraice. “Life hit me hard,” he says. “Two extremes at once.”

But he soldiered on, determined to honor his mother, who had always been his biggest fan, and provide for his family, which would grow and grow: Tony and Alayna now have four kids. Wins on the Web.com Tour (2014) and at the PGA Tour’s Puerto Rico Open (2016) paid for plenty of diapers. Finau reached a different level of consistency in 2017, wracking up nine Top 10s en route to finishing 19th in the FedEx Cup points race. And he has carried the hot play into 2018, putting him in the conversation to represent the United States at the Ryder Cup.

Even as he has become one of golf’s great success stories, Finau takes nothing for granted. “I definitely take time to smell the flowers, because I feel like my upbringing was quite a bit different than most guys on Tour,” he says. “I have a little different perspective on this whole golf thing than maybe some other players. So I definitely take time to realize where I’m at in my life. And I know that I’m blessed.” 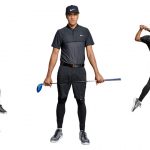 You may also like Tony Finau’s 5 keys for swinging fast, not furious