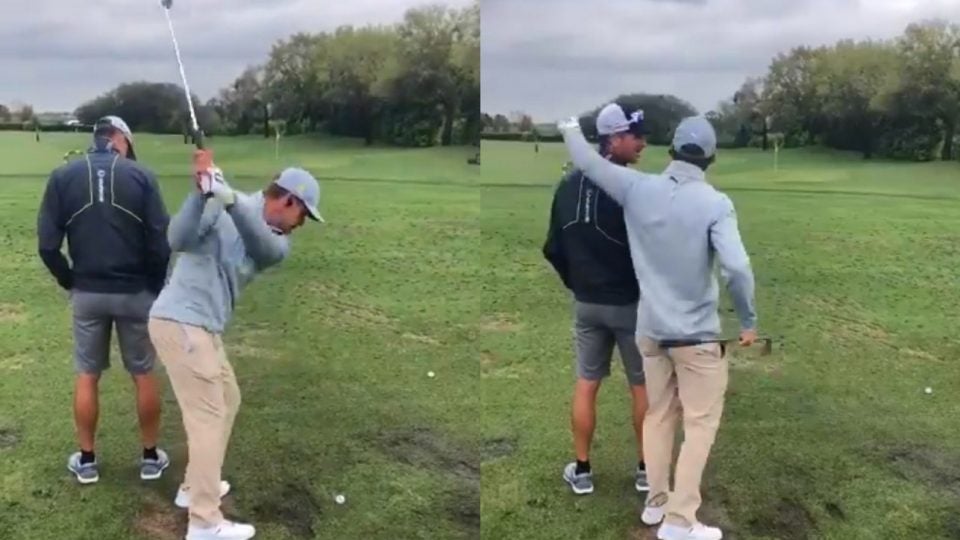 Check out Bryson DeChambeau's most recent trick shot below.
@bubbawatson on Twitter

Byrson DeChambeau is a man with many unique talents. His golf idiosyncrasies are well-documented (see: single-length irons). On Tuesday on the Bay Hill driving range, DeChambeau worked on a new innovative swing that turned into a terrifying trick shot.

The new swing in question is a same-side follow-through, and that’s exactly what it sounds like: a swing with a follow-through that stops abruptly after impact.

But when practicing for this week’s Arnold Palmer Invitational, DeChambeau thought the best way to practice his shot was to put something real on the line, namely, someone else’s face.

In the videos below, Bryson’s overly-trusting helper stands in front and left of DeChambeau, with his right foot nearly touching DeChambeau’s left foot as he addresses the ball.

Check it out for yourself below, via Bubba Watson’s Twitter feed.

Is this legal? @USGA? #Wow pic.twitter.com/PewOq4jO6l

Would you stand there? 😬 pic.twitter.com/mYzmxNE5EB

Somehow, someway, DeChambeau pulls off the shot, making impact with close to full force before stopping his iron right next to the face of his trick-shot partner.

It’s a swing that would be helpful to any golfer stuck next to a tree. But if you’re going to test out this terrifying trick shot yourself on the range this weekend, maybe don’t involve a living, breathing human like Bryson did.

DeChambeau tees off for the first round of the Arnold Palmer Invitational on Thursday at 12:44 p.m. ET alongside Phil Mickelson and Brooks Koepka.