Editor’s note: Ted Bishop was the 38th president of the PGA of America and selected Tom Watson to be the U.S. Ryder Cup captain in 2014 at Gleneagles.

On Wednesday, Steve Stricker will become the first American Ryder Cup captain never to have won a major championship when he is officially selected to lead the 2020 U.S. team. By contrast, only eight of the 14 European captains (since 1979) won majors. Stricker’s selection is the latest and clearest sign that the U.S. Ryder Cup brass is breaking the mold of its selection process, because the Euros have certainly proven that picking major-champion captains does not equate to Ryder Cup success. Just ask Paul McGinley or Thomas Bjorn.

I vividly recall a conversation I had with Stricker on a cold, November night in 2011 when I was doing my due diligence on Tom Watson as the 2014 U.S. captain. Steve and I talked about the U.S. selection process and I asked him how important it was to be a major champion when given the keys to the Ryder Cup team.

As I recall it, Stricker told me: “I never really looked at Paul [Azinger] or Corey [Pavin] as major champions when they were my captains. To me, they were always just former Ryder Cup players. But Tiger and Phil always laugh and tell me that I will never be considered as a Ryder Cup captain until I win a major. So, I guess maybe it is important in my case.”

That was eight years ago. It’s ironic that Woods and Mickelson, now the driving forces behind the U.S. Ryder Cup Committee, would pick a non-major winner to lead the Americans at Whistling Straits. Even so, critics of the Stricker selection will say that nothing has actually changed and it’s just more of the same from the Americans.

I maintain that Stricker has many McGinley-like characteristics, which bodes well for the U.S. He played on three consecutive Ryder Cup teams, from 2008-’12. He has now served as a vice captain on three straight Ryder Cup teams, from 2014-’18 (one more than McGinley). In addition, he has been a Presidents Cup captain (2017) and several times a vice captain. No other modern day Ryder Cup captain from either side ever has had the volume of international team coaching experience as Stricker.

Here’s a little-known fact: The PGA asked Watson to tab Stricker in a vice captain’s role in 2014 because he was in line to be the next captain in Hazletine in 2016. PGA officials had approached Stricker to gauge his interest, and the interest was mutual. When all hell broke loose in the aftermath of the Gleneagles loss, everything changed. The Ryder Cup task force was created and the PGA went back to the drawing board. 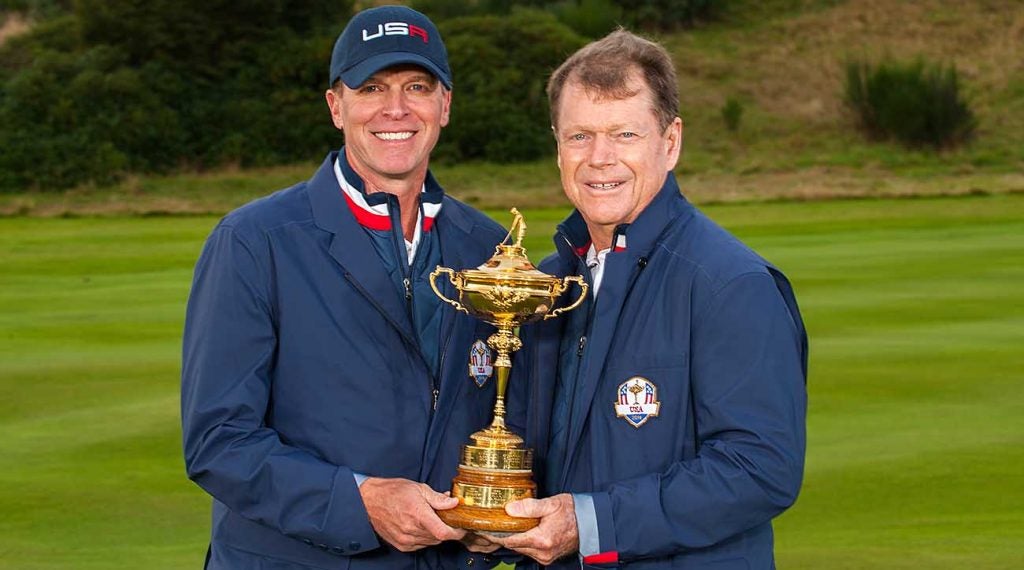 Heir apparent: Stricker was on tap to take the reigns from Watson in 2016, before a rough week for the U.S. in Gleneagles changed everything.
Getty Images

When asked to be on the Ryder Cup task force and told that he probably was not going to be the next U.S. Ryder Cup captain, Stricker said, “That’s okay. I learned a lot at Gleneagles. I went into the experience thinking like a player and left the week with a whole new perspective. I would really like to be an assistant a few more times and then if given the chance, I will be a better captain.”

During our conversation (and I’m paraphrasing here), I asked Stricker what he would have done differently at Gleneagles.

“My first two thoughts are all based on hindsight and not a criticism of Tom [Watson]. When we arrived in Scotland, everyone had some jet lag and didn’t have their legs,” he said. “American teams should spend that first afternoon doing nothing but putting. Going from green to green and getting a better feel for that.

“The other thing, and the Europeans did this, was to play the 4th and 5th holes more because they were key holes and we struggled there. Practice on the course is allowed in the Ryder Cup. Padraig Harrington [European assistant at Gleneagles] took players out there who weren’t in the matches and they played those two holes a lot. I’ve never seen any American team do that. It is more important than being with your wife or girlfriend and rooting the other guys on.”

Stricker’s critics will also point to his 3-7-1 Ryder Cup record, which took a dive after going 0-4 at Medinah in 2012 with Woods as his partner in three matches. In fairness to Stricker, no one would have been able to win with Tiger that week.

Which brings up another question: How will Steve manage his close buddies, Woods and Mickelson? To know Stricker is to really understand the quiet toughness that he possesses. He resurrected his own career from the dead and that doesn’t happen without complete resolve and tenacious mental toughness. If Woods didn’t have tremendous respect for Stricker, he wouldn’t call on him for putting advice or, more important, personal advice.

Phil is the wild card. Based on his recent victory at Pebble Beach, he can obviously still play at a high level. But the Ryder Cup is a long way off and who knows what form he will be in then. Still, we all know that Phil would love one more crack at a Ryder Cup. Don’t forget Raymond Floyd played in 1993 at the age of 51 and Mickelson is cut out of that mold.

I’m betting Stricker is capable of making his own decisions. At this point, Woods and Mickelson are no sure bets to be on the 2020 Ryder Cup team, other than as assistant captains.

There’s another trend the U.S. could break. If Stricker leads a U.S. victory at Whistling Straits, why not let him repeat as captain in 2022? Ben Hogan was the last American to captain two successive teams to victory in 1947-’49. Maybe Stricker will shatter the status quo once and for all.