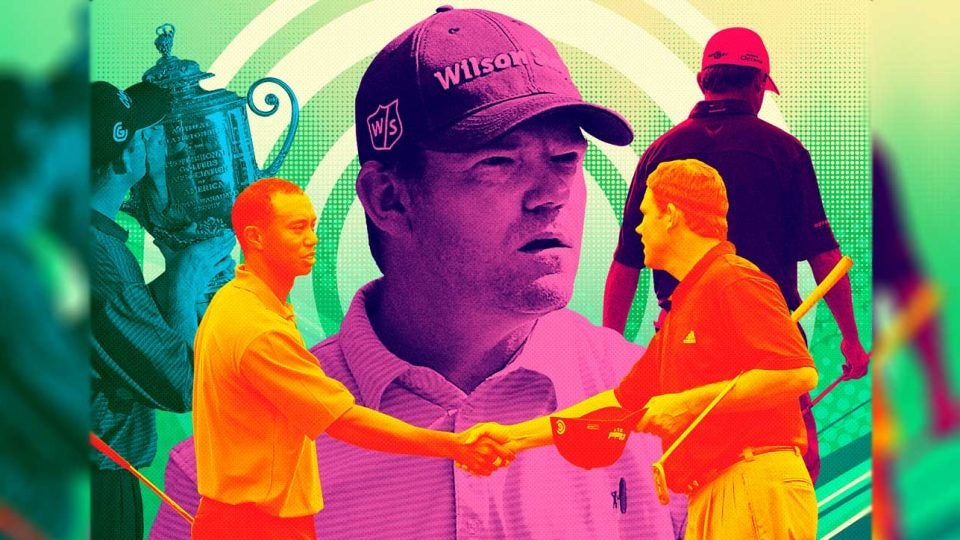 Shaun Micheel was on top of the golf world in 2003. It's been a tough time ever since.
Illustration: Sean McCabe

Imagine if the most spectacular moment of your life became the heaviest burden. If the one thing you had always dreamed about turned into something you wished the world would forget. Shaun Micheel has been there. In some ways he still is. Fifteen years ago this month, he hit one of the greatest shots in golf history, a stone-dead 7-iron on the final hole to nab the 2003 PGA Championship. It was his first Tour win, at age 33. The late-bloomer’s future was endless. Fifteen years later, he’s still looking for another win and finally making peace with the one he has. “Having the Wanamaker trophy, it followed me around like that cloud over Pigpen,” Micheel says over lunch at Ridgeway Country Club outside of Memphis, which is accessed via Shaun Micheel Blvd. and boasts walls cluttered with memorabilia of his career.

When Micheel brushed in his 72nd-hole birdie at Oak Hill, he had no grandiose stirrings about his place in golf history. “My first thought was, I’ve finally won a PGA Tour event,” he says. It had taken a decade of grinding on various minor league tours to get there; while an undergrad, Micheel had planned to be a pilot, like his father. The magnitude of what he’d done didn’t hit Micheel until a week after the PGA, when his overwhelmed business manager burst into tears, saying, “I don’t  think I can do this anymore.” Things only got more complicated: Three months after the win,  Micheel and his childhood sweetheart, Stephanie, welcomed the first of their two children, Dade Palmer, whose middle name was in part homage to a golfer whose class Micheel always tried to emulate. (A daughter, Marin, would arrive three years later.)

In 2004, he managed eight top-25 finishes, a pretty solid year for a new dad learning all the unfamiliar courses to which his elevated status granted access. He also put his newfound fame to good use, founding the Shaun Micheel Make-A-Wish Classic, which would raise $3 million and grant more than 600 wishes. Micheel still gets emotional talking about some of those kids.

But by 2005, the strain was showing: Micheel missed the cut at all four majors and was then diagnosed with low testosterone, which required hormone therapy (and a battle with Tour suits). What made his body go haywire? “I think it was the complete and utter stress I felt to play well,” he says.

MORE: A PGA CHAMPION AND WRITER LOCK HORNS, THEN LEARN FROM IT

By the end of ’06, Micheel had his energy back, and it showed — he finished second at the PGA Championship. A month later, at the World Match Play, he took on Tiger Woods, who was riding a five-tournament win streak. Micheel crushed him 4 & 3 and went on to the championship match. He was back, or so it seemed. But all the while he was hearing a pop in his shoulder. Micheel spent the better part of the next two seasons soldiering through torn ligaments. As his play suffered, so did his self-esteem.  Once a social creature, he began playing practice rounds at 3 p.m. by himself, hoping to avoid the gaze of colleagues. Still, Micheel couldn’t hide from life’s travails: In ’10 his mom died of cancer, at 64. For a long time afterward, “I thought about  her before every shot,” he says.

By 2011, his exempt status had run out. Ever since, he’s just been hanging on, playing a season in Europe and splitting time between the PGA and Web.com Tours. Micheel was always a precision player, and he hasn’t been able to keep up with the onslaught of young power players.

Now, blessedly, he gets to start over again, on the Champions Tour,  when he turns 50 in January.  Micheel is looking forward to being among friends, and as the desire to practice has come back he’s spending more time at Ridgeway. At lunch he always sits in the same chair that his father, Buck, used to claim at a table of his fellow  FedEx pilots. A couple dozen of them had a standing game at 10:30 every morning, and playing with those characters is how Shaun fell in love with the game. Buck died in 2016, but his son says, “Every time I come to the putting green  I still look up into the windows, expecting to see him in his chair.”

So much of Micheel’s golfing life is bittersweet — especially the victory that has defined him. “I deserved to win the PGA because I played the best that week,” he says. “But did I earn the right to be part of the history of that trophy? I don’t know. I used to think about that a lot. More and more, I’m just appreciative that my name is on it.” And forever will be, proof that every now and then nice guys do finish first.