SAINT-QUENTIN-EN-YVELINES, France — Midday Friday, whispers cascaded around Le Golf National: would European captain Thomas Bjorn possibly sit Rory McIlroy for the afternoon session? The musings came from folks on television, from reporters in the media center, from American fans. All of the above had just seen McIlroy put forth a flat morning effort that had resulted in a 4&2 defeat and featured the chief fourball sin: no birdies.

There were no such whispers among European fans. Justin Rose may be the top-ranked player on their side, but Rory McIlroy carries the team’s hopes and dreams. To bench Rory would be to quit on him. Europe isn’t ready to do that.

Through five holes in the afternoon session, McIlroy’s critics had a case to make. An opening bogey and four pars had he and new/old partner Ian Poulter, who had spent the morning cheering on his side, 2 down to the B-squad American pairing of Bubba Watson and Webb Simpson.

But then something happened. McIlroy pummeled driver, his trademark weapon, onto the green at the short par-4 6th. After Poulter shorted his eagle putt, McIlroy buried an eight-footer and unleashed a primal scream. And with good reason: it was his first birdie of the day.

The pairing with Poulter seemed to suit McIlroy better. The Northern Irishman has been battling his game since last week’s Sunday showdown with Tiger Woods went badly amiss, and even as the tides turned on Friday afternoon, he still didn’t have his best stuff. But he had a partner more suited to pulling him back to the moment.

Rory McIlroy may be the most rational of the game’s top players. He is confident, as he should be, given his bottomless talent and ability. But he also seems keenly aware of his own frailties. He allows doubt to creep in. The very next hole, McIlroy pushed his iron shot from the center of the fairway to the back right fringe and looked undone again. He peered at his divot, rehearsing a swing he wished he had made. Poulter noticed and called him over, breaking the spell.

By contrast, Ian Poulter’s game, particularly at the Ryder Cup, is built on irrational confidence. A bad shot hardly registers, while a good shot seems to fuel him. Every Poulter thumbs-up to the crowd drew a massive ovation, and the force began to weigh down on their opponents. At No. 8, he left a birdie putt horribly short, drawing murmurs of dismay from the crowd. But he looked far more disgusted himself for a brief moment and then left it behind. McIlroy helped him by burying the five-footer for par. Simpson helped him even more by missing a short par putt of his own.

McIlroy and Poulter were far from perfect. But their par at 7 was better than the Americans’ bogey. They benefitted, too, from the miss by Simpson at 8, and another by Watson at 9, and then Watson again at 10. By this point the match had gone from 2-Up, Red to 2-Up, Blue. The cheers echoing around the course mirrored what we could see on the scoreboards: every match was now Blue.

One unique aspect of the Ryder Cup is the size of the entourage inside the ropes. A selection following this group? The four players’ wives: Erica McIlroy, Katie Poulter, Dowd Simpson, and Angie Watson. Rory’s dad, Gerry McIlroy was inside the ropes, too. When Rory hits tee shots, Gerry doesn’t watch the ball. He watches his son. Erica seems to do the same thing. It makes much more sense, especially for an emotive player like him. Rory ripped a tee shot off 10 and Gerry watched him will it into the fairway with his body language. “Tough course in the wind,” he said to nobody in particular. 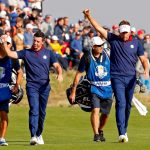 You may also like Your 30-second guide to Day 1 at the Ryder Cup: What’s the score, why it matters, and the best rookie debut

Assistant captains began to gather, and other players and their wives, turned up too, particularly as the other matches turned into blowouts. Steve Stricker, Matt Kuchar, and even Jim Furyk came by, looking grim. Tiger Woods’s girlfriend, Erica Herman, was there, too, and Tony Finau and Patrick Reed stopped by to cheer on their teammates. Stricker walked side-by-side up one fairway with Reed, querying him on his morning round with Tiger Woods.

“I was just checking in and wondering, y’know, if you have any other feelings or desires,” Stricker said. Reed didn’t say much. Stricker continued, musing about Woods. “How was his energy level?”

“It was good,” Reed answered. “It really was. It’s just, y’know…” and then he trailed off, suddenly aware of the presence of others. He and Stricker continued the conversation at a quieter murmur.

By contrast, the European assistants appeared to dip into conversation with McIlroy and Poulter for the mere purpose of offering up jokes. This delighted European onlookers.

“That’s not Padraig,” his friend dissented, pointing at Matt Kuchar.

“No, that’s Padraig there, you nob,” the first fan replied. It was indeed. Padraig Harrington shot a grin in their direction.

While Simpson and Watson increasingly gave each other space as they rode the bogey train, McIlroy and Poulter were in step walking off the tee, approaching the green, reaching putts and everywhere in between. Even when their putts didn’t drop, they cracked up at their misreads and appeared to be having a blast. Does Bubba Watson ever appear to be having a blast?

But again and again, the older brother-younger brother division of labor between Poulter and McIlroy seemed to pay dividends. As McIlroy stayed on the 11th green to reconsider a putt he had just missed, Poulter came over to intervene. McIlroy continued to lean on Poulter in between shots. Poulter continued to lean on McIlroy during shots. The crowning example of the entire session came at No. 13, when Poulter’s tee shot sailed into the edge of a hazard, leaving McIlroy to step up to the next shot, ball well below his feet, needing to go up and over and around to get at the pin.

This is borderline unfair.

That’s exactly what he did. And Poulter finished it off with a birdie putt.

That birdie sank the opposition. Poulter was the one who holed the putt and pumped his fist, but McIlroy seemed to get just as much satisfaction out of the ordeal. Poulter had validated his effort. True teamwork.

McIlroy summed it up neatly after the round. “The two guys struggled and missed a few fairways and we took advantage of them,” he said. They did indeed. The Euros pushed and pulled. “I think a big thing for us this week is, as Ian said resilience, but also persistence,” he said, confirming just how much he has listened to Poulter all week. “You have to persist. Persist, persist, persist, until it turns around for you.”