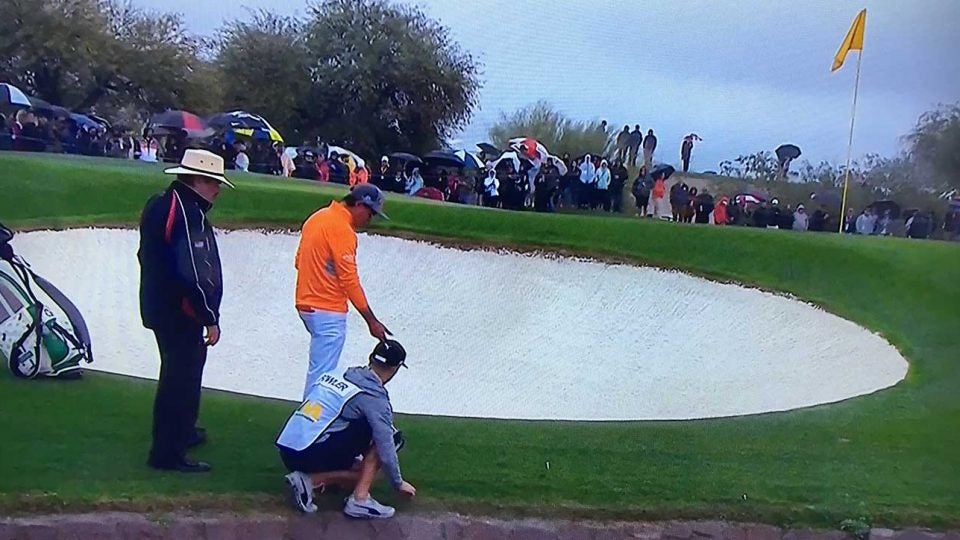 Rickie Fowler talks with rules official Slugger White during the final round of the Phoenix Open.

Rickie Fowler struck a bad chip and then was dealt with some terrible luck during the final round of the Waste Management Phoenix Open on Sunday.

Fowler led by four to begin the day and increased his lead to five standing on the 11th tee, but then disaster struck. He was short of the green in two on the par-4 11th, but his third shot ran through the green and into the water.

Preparing to play his fifth shot, Fowler dropped his ball, but due to the slope and rainy conditions it didn’t stay on the bank. He was then allowed to place it, which he did, before walking up the bank toward the green and assessing his next shot. As Fowler was on the green his ball rolled back into the water on its own, but since it was in play and had previously come to rest, he was still assessed a penalty stroke. 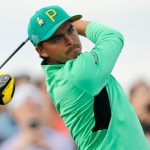 After discussing what happened with his caddie and rules official Slugger White, Fowler took another drop and then played what became his sixth shot onto the green. Fowler, to his credit after the bad break, then jarred a 17-footer to save triple bogey.

Rickie Fowler has made a triple bogey 7.

The lead is down to 1. pic.twitter.com/1gZxTfJvVJ

Playing partners Justin Thomas and Matt Kuchar, along with their caddies, were trying to figure out what was happening during the lengthy delay, and then were dumbfounded at the rough break Fowler received.

“It’s like a funeral out here right now,” said Jim “Bones” Mackay, the on-course reporter for the group.

As Fowler was playing the 12th, Branden Grace made a long birdie putt on the 12th, a hole ahead of Fowler, to get within one of the lead.

After the craziness of the 11th hole, Fowler walked off the green with a one-shot lead over Grace and leading Kuchar and Thomas by three. Fowler bogeyed the following hole, the par-4 12th, to drop into a tie with Grace at the top. Grace then made birdie on 13 to grab the solo lead.

Update: Fowler rebounded from the bad break and won by two. Here’s the full recap.