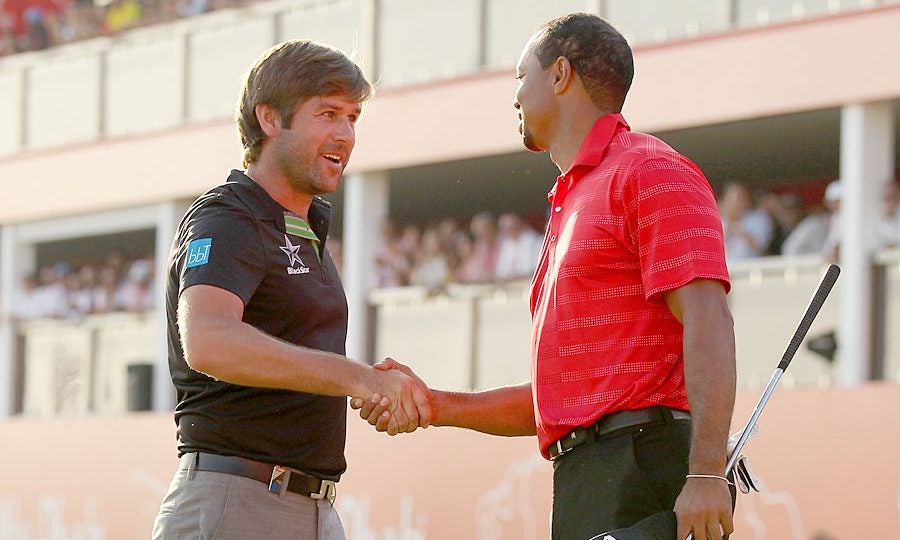 Robert Rock entered an exclusive club by beating Tiger Woods at the Abu Dhabi Championship. Rock became only the ninth player on the PGA or European tours to win while paired with Woods in the final round. Here's a look back at the other members of the Tiger Slayers Club.
Paul Childs/Action Images/ZUMAPRESS.com

Nothing Phil Mickelson says surprises us anymore, but playing a shot into a rock on purpose? Well, you still have to explain that one, Phil.

Mickelson’s approach to the 18th green during the final round of the Wells Fargo Championship on Sunday went dangerously close to falling into the creek to the left of the green, but Mickelson found a way to play it. He got up and down for par to shoot 69 and tie for fifth.

But we found out later the ball was leaning against a rock, and that Mickelson used the rock to his advantage.

“It was touching a rock, but somehow I was able to get way underneath the ball,” he said. “It was kind of on such a severe lie, I was able to hit it vertically. So I hit it off the toe, and the toe of my wedge is all banged up — not the sole, but the far end of the toe. I semi-played it into the rock to kick it to the right over the pin. So I went up vertically and used the side of the rock to kind of get it to go to the right.”

Asked if he had practiced that shot, Mickelson said, “I don’t know, but I’ve done it. Whether it’s in play or practice or whatever, I mean, I’ve done it growing up as a kid. I don’t know, I’ve just done it a bunch.”

A drop lesson from Lefty! pic.twitter.com/kPfeOU8klG