Max Homa was lining up a putt on the 13th green on Sunday when CBS on-course reporter Peter Kostis told the viewing audience a little-known secret.

Kostis, who went on to say that Homa put on a stand-up comic routine during his 8th-grade talent show, isn’t alone with this opinion. The 28-year-old Homa is one of the wittiest and honest pros in the game, which is old news to those who follow him on Twitter.

I feel like I should start a golf blog that focuses on the ups and downs of life as a professional golfer but I’m concerned that my abilities as a writer are limited to 280 characters. Thanks a lot, Twitter

Homa won the 2013 NCAA individual championship, yet he still wasn’t a household name on Tour, at least not until Sunday, when he shot 67 to win the Wells Fargo Championship by three for his first career PGA Tour victory.

Before Sunday Homa had two Web.com Tour victories and just three top 10s in 68 PGA Tour starts, and only one of those came in the last three years. It was only in 2017 when he made two of 17 cuts on the PGA Tour and dropped down to the Web.com Tour, but he regained PGA Tour status last fall and now has a crucial two-year exemption on the PGA Tour.

But even while Homa was working on his game inside the ropes, his Twitter game never suffered. He has 26,900 followers whom he entertains often. He talked about his bit of social media celebrity at Pebble Beach in February, where he tied for 10th for his best finish of the season up until Sunday.

“I probably have a fairly large fan base compared to what I deserve for my golf,” Homa told the San Francisco Chronicle.

Not anymore. Here’s a snippet of Homa’s greatest social media hits, which gives you a bit more insight into the Tour’s most recent winner. So go ahead and click that follow button. 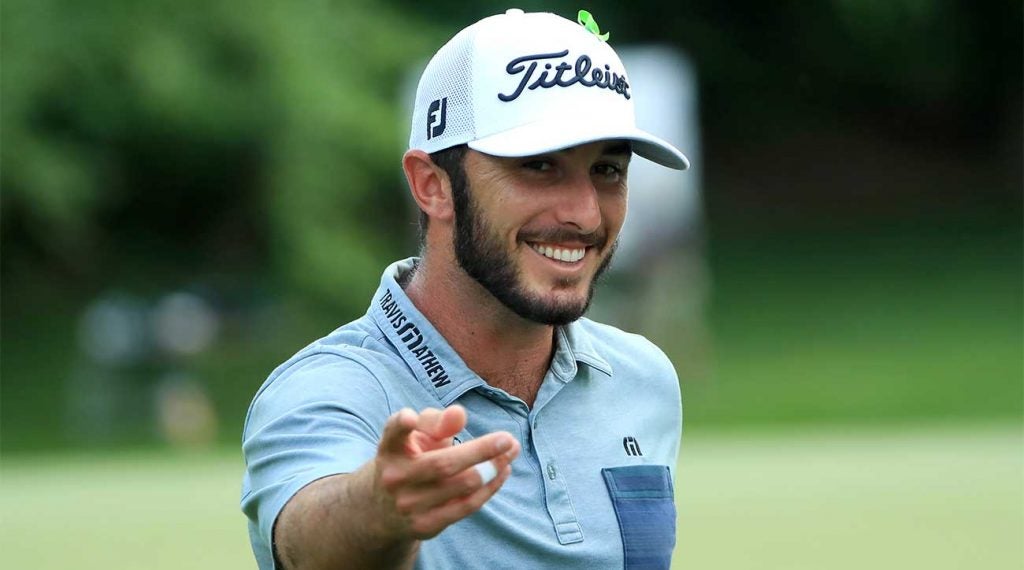 Max Homa was all smiles at the Wells Fargo Championship on Sunday.
Getty Images

Met a woman at the airport from my hometown. Pretty crazy considering we’re so far from home. I lied when she asked where I’m from, obviously, cuz that would have lead to more small talk. But crazy nonetheless

A husband at the airport just called out his wife for being too close to the line & confusing people who were ready to board. Huge win seeing as how this is many people’s pet peeve. Was great to see someone stand up for the greater good of the group. He lost tho, obviously

Just witnessed a guy with southwest priority boarding choose a middle seat. Pretty discomforting to know there’s a serial killer on my flight

I don’t use a green reading book because if I did, I wouldn’t be able to blame my caddy when I missed

While walking off the 18th tee today, nearing the end of a pretty difficult/breezy day, my caddy said that if golf were easy it wouldn’t be fun. It was a deep and philosophical comment. I wanted to punch him

When u have to walk back to the tee after u can’t find ur ball pic.twitter.com/Swd4WVeOAF

Happy Thanksgiving! I’m thankful for my family, my friends, my dog, golf, and almost all of u twitter people. Also, I’m thankful for that special feeling u get when u have to hit a provisional but find out ur ball was actually in bounds

It might be recency bias but this should have won Best Picture pic.twitter.com/DLPmeld2u0

Crazy stat of the day (maybe, idk): this is the first season since I’ve been a professional golfer that Tiger the goat has finished the year with more fedex cup points than me

Right now, Tiger is like everyone’s ex who we’ve given way too many 2nd chances to, and he has the opportunity to rip your heart right out of your chest but we’re all ok with it because we tend to only remember the good times

Contrary to popular belief, golfers fist fighting on national tv for the world to see would NOT be good for our street cred. Tiger somehow got people to believe we’re real athletes, let’s not ruin all his hard work

On the Three S’s: soccer, shopping and socializing:

Currently watching a youth soccer rivalry game (boys 5 and under). It’s the Angry Birds v Blue Steel. The Angry Birds struck first, unfortunately it was on their own goal. The tension is building. More updates to come

I read that in order to be successful I need to work on my weaknesses even when I’m not at the golf course, so I went shopping with my girlfriend to work on my patience and positive attitude. Leaving no stone unturned #offseason

On Justin Rose signing with Honma:

I’ve never been mentioned in the same sentence as Justin Rose before. I still haven’t, but today I’ve been pretty close a whole bunch of times #honma

Although the above tweet is officially no longer true. Homa led Rose by three entering Sunday’s final round but held off the former World No. 1, Olympic gold medalist and major winner, who shot 68 and finished 3rd, four strokes behind Homa.