The 30-second guide to the Sony Open: Kuchar comes out on top

No one likes to leave Hawaii, but that’s exactly what we must now do after Sunday’s Sony Open concluded the PGA Tour’s two-week stint at the tropical paradise. But before we say aloha, here’s what you missed at Waialae Country Club on Sunday in Honolulu.

How it happened: Kuchar opened the day with a two-shot lead but struggled early, and Andrew Putnam jumped out ahead and took a one-shot lead at the turn. They were tied at 19 under after 13, but Putnam made bogey on 14 and Kuchar didn’t look back. Kuchar made birdies on 15 and 16 to extend his lead and cruise to a four-shot win. 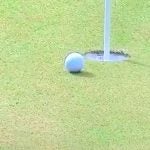 You may also like ‘It’s going to cost someone’: Latest backstopping incident on Tour draws ire of Golf Channel commentators

What it matters: It’s Kuchar’s ninth career PGA Tour victory and second in the last three months. He also won the Mayakoba Golf Classic in November, and that came with a local, fill-in caddie. He won this week with regular looper John Wood on the bag.

Best shot when it mattered: Putnam tied Kuchar with a birdie on 13 but then fell back with a bogey on 14. Kuchar didn’t let the momentum slip on the next hole when he drained a 13-footer for birdie to take a two-shot lead. A fist-pump from the usually composed Kuchar said it all.

Best shot: A strong finish from J.T. Poston (with an assist from the pin).

Best finish by a 54-year-old: Davis Love closed with a 65 to finish 16 under overall and take seventh place. Per the Golf Channel broadcast, it’s his 180th career top 10.

Up next: The PGA Tour heads back to the states for the Desert Classic in La Quinta, Calif. Phil Mickelson, Justin Rose and defending champ Jon Rahm highlight the field. On the European Tour, Dustin Johnson, Brooks Koepka and Tommy Fleetwood are the centerpieces of next week’s Abu Dhabi HSBC Championship.