The Houston Open was headed for quite the finish on Sunday afternoon at the Golf Club of Houston. Here’s what you missed.

How it happened: Griffin led Mark Hubbard by one entering the day, but the final pairing was tied at 14 under at the turn on Sunday. Griffin bogeyed the 11th after a bad approach with a nine-iron and handed Hubbard the lead, but it turned into a three-way battle when Scott Harrington jumped into the mix. Harrington made four birdies (and two bogeys) over the final seven holes and took the clubhouse lead at 13 under. Hubbard bogeyed the 15th to make it a three-way at the top, but Griffin jumped ahead with a birdie on 16. Closing with the most difficult hole on the course, the 484-yard par-4 18th, Griffin drove it into the rough but found the green and two-putted for a one-stroke win over Harrington and Hubbard.

Why it matters: It’s the first career PGA Tour victory for Griffin, a 31-year-old who bounced around on the mini golf circuits for years. The Twitter account Monday Q Info broke down Griffin’s past, and road to Sunday, nicely:

Best quote: “I’m just so relieved it’s over,” Griffin, after his victory.

Best putt: Griffin, putting for birdie on the par-3 16th while in a three-way tie for the lead. This, from 33 feet, 4 inches, put him in front for good.

Best new car: Griffin’s mom. The Golf Channel broadcast reported he promised to buy her one if he won on Sunday. With the $1.35 million Griffin just won, she can get a nice one.

Up next: The PGA Tour heads to South Korea for the CJ Cup at Nine Bridges, the first of three straight events in Asia. The CJ Cup has a limited field with just 78 players, but it boasts some big-time stars in Brooks Koepka, Justin Thomas, Jordan Spieth and Phil Mickelson. 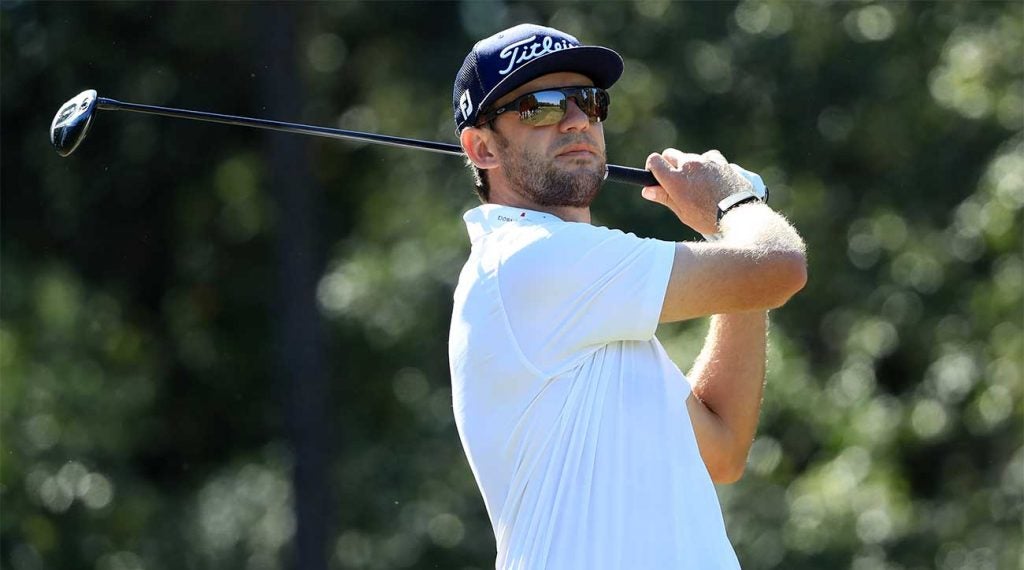 Lanto Griffin watches a tee shot during the final round of the Houston Open on Sunday at the Golf Club of Houston.
Getty Images