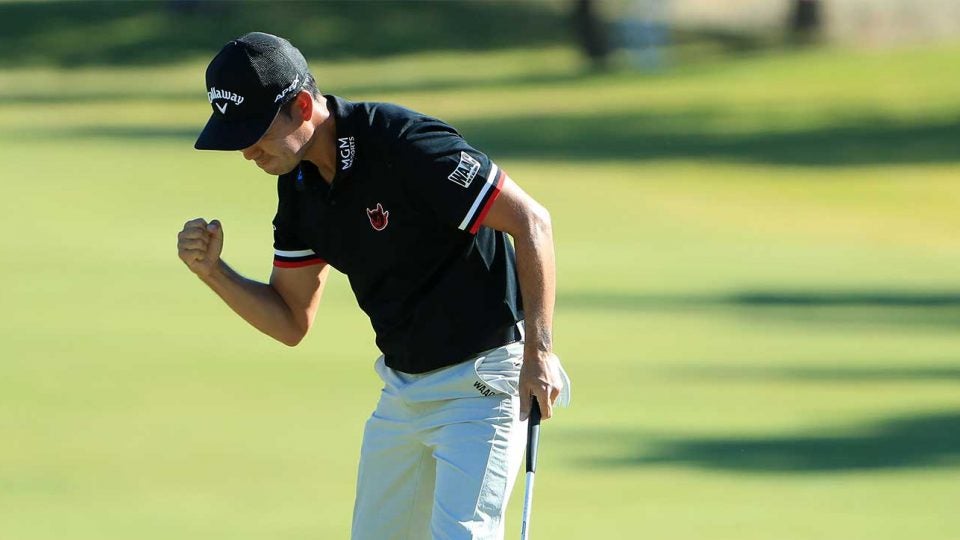 Kevin Na pumps his fist during the final round of the Shriners on Sunday in Las Vegas.
Getty Images

Kevin Na led Patrick Cantlay by two after 54 holes of low, low scoring at the Shriners Hospitals for Children Open at TPC Summerlin, but things were about to get interesting on Sunday in Las Vegas. Both players had won here before — Na in 2011 and Cantlay in 2018 — and one was destined to do it again. Here’s what you missed in the final round.

Who won: Kevin Na (one-under 70, 23 under overall; Won with a par on the second playoff hole)

How it happened: Na played the front nine in two under on Sunday and stood on the 10th tee with a three-shot lead, but a disastrous triple bogey on the par-4 10th (see below) cut his lead to just one over Cantlay, and those two dueled it out in the final pairing the rest of the way.

They had identical scorecards the next five holes — par, birdie, birdie, par, birdie — and Na still led by one with three to play. But on the par-5 16th Na’s second shot hit off the front bank of the green and dropped backward into the water, leading to a bogey. Cantlay, meanwhile, found the middle of the green with his second shot and two-putted from 39 feet for birdie, making it a two-shot swing and giving him a one-stroke lead. More fireworks happened minutes later on the par-3 17th; Cantlay landed his 9-iron short and it spun back into the water and made bogey, and Na found the bunker right of the green, splashed out and drained a 23-footer to save par and tie Cantlay at 23 under. After Cantlay barely missed his birdie chance to win on the 18th green, the duo headed back to the 18th tee for a playoff.

This putt ...
Patrick Cantlay ...
For the win ...#QuickHits pic.twitter.com/0TCnkDFsPE

On 18, both players found the fairway and gave themselves makable birdie putts: Cantlay from 10 feet, 2 inches, and Na from 9 feet, 5 inches. Cantlay drained his first to put the pressure on Na, who answered. Back to the 18th for the second playoff hole, Cantlay three-putted for bogey while Na cleaned up his par from four feet to win. Pat Perez was alone in third at 21 under.

Why it matters: It’s the fourth career PGA Tour victory for Na, 36, who won his first PGA Tour event in 2011 but has now won his last three in the past 16 months. He also became the second multiple-time winner of this event.

When the tournament became a tournament: Na led by three with nine to play, but his chip on the par-4 10th rolled off the green and led to a triple-bogey 7. It dropped his lead to just one, and suddenly the chase was on.

Record-breaker: When Na rolled in his 23-footer for par on 17, it set the PGA Tour’s record for most feet of putts made at a tournament. He finished with 558 feet, 11 inches of putts made through regulation, breaking Ben Martin’s ShotLink-era record of 551 feet, 2 inches, set at the 2015 Charles Schwab Challenge.

Up next: The Houston Open at the Golf Club of Houston begins on Thursday. Major-winners Henrik Stenson, Jimmy Walker and Jason Dufner are in the field. University of Texas sophomore Cole Hammer received a sponsor’s exemption. The second-ranked amateur in the world qualified for the Chambers Bay U.S. Open as a 15-year-old in 2015.