Jordan Spieth making progress after second straight top 10: ‘I know exactly what I need to work on’ 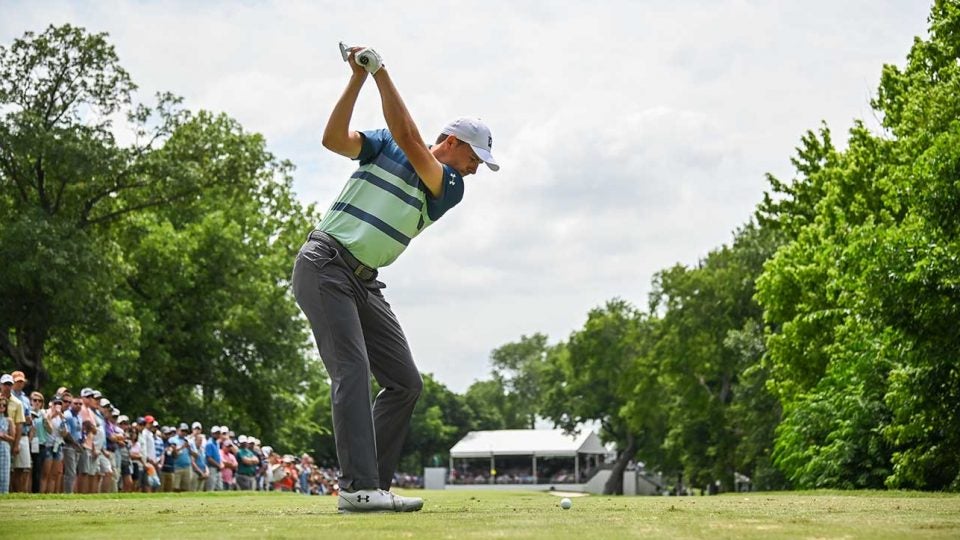 Jordan Spieth hits a tee shot during the final round of the Charles Schwab Challenge on Sunday.
Getty Images

Jordan Spieth couldn’t miss with his putter through 54 holes at the Charles Schwab Challenge, but Sunday was a different story.

Spieth needed 32 putts and didn’t make anything outside of eight feet until the final hole en route to a two-over 72 on Sunday at Colonial. He started the day two shots behind 54-hole leader Kevin Na and was in the penultimate group in front of a home crowd, but Spieth never contended after an opening-hole bogey. He tied for 8th, finishing eight shots behind Na.

“Just a tough start,” Spieth said. “You want to be one or two under through the first couple holes and playing 1 and 2 one over was tough because you know the guys around you are going to be making some birdies. Felt like I only missed four swings today. Felt like I hit the ball better today. I putted the same as every other round. Burned a lot of lips. I was swinging the club better today than the entire week. It’s just kind of funny how the score won’t show it.”

Tournaments
Tour Confidential: After a disappointing PGA, should Tiger be the Memorial favorite?

Despite struggling to get anything to fall in the final round, it was actually one of the best putting weeks Spieth’s had in his career. He led the field in Strokes Gained: Putting (7.473), and his 480 feet, 4 inches of putts made was a record for him on Tour.

Spieth missed three cuts and never finished better than T35 in his first eight starts of the season, but he’s finished in the top 30 in five of his last six starts. That includes his T3 at the PGA Championship last week. He’s back at it again for the Memorial Tournament next week.

“I think I made progress this week, and I know exactly what I need to work on before I start on Thursday next week in my swing to make it even better,” he said. “I have kind of been moving between a couple different swings through this week, and the one I had today is the right move. I’ve just got to get some repetitions in with it to fine-tune it. It was the best I drove the ball for sure. It’s just the shots I missed were because I overdid what I was trying to do. I didn’t trust I was doing it right. So when I look back it’s just frustrating to be a few over on the round when I feel like I was actually swinging the club pretty well.”